Whether it was their first time among the more than 100,000 at the March for Life in Washington, D.C., or their 16th, the immense annual peaceful demonstration against legal abortion left a lasting impression on the hundreds of high school participants and co-travelers from the Diocese of Peoria.

“I really wanted to see the scale of the pro-life movement,” said Christopher Russell, a senior at Central Catholic High School in Bloomington and first-time march pilgrim. So he joined 45 other students from his school on a trek to the nation’s capital for the event, held this year on Jan. 18 — four days before the anniversary of the 1973 U.S. Supreme Court decisions legalizing abortion. 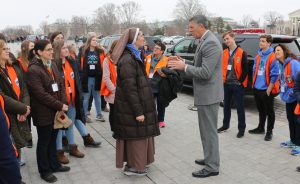 U.S. Rep. Darin LaHood (R-Peoria) speaks with Sister Sara Kowal, SCTJM, campus minister and theology teacher at Peoria Notre Dame, and some of the 130 students and chaperones from the school who traveled to Washington, D.C., for the March for Life and related events. (Provided photo)

“A lot of times it seems that pro-life is this underground movement that isn’t covered by media,” Russell told The Catholic Post, “but the sheer number of people at the march is an indication that this is a strong and thriving movement.”

While it was Russell’s first March for Life, it was the ninth for Erin Earl, a junior at Peoria Notre Dame and co-president of its Teens for Life group. She’s been going since the third grade.

Some years her father, Jason Earl, organized parish-based trips to the march — first in Oregon, Illinois, and then from St. Patrick in Washington. Some years it was a family trip, including once when a blizzard left them stuck on the Pennsylvania Turnpike.

This year, Erin Earl was one of 100 students from Notre Dame. The group also included 30 chaperones.

“It was an accomplishment to have three buses go from just one school,” said Earl. While she calls the march and surrounding activities “amazing,” she added that “seeing fellow teens’ eyes open to the pro-life movement was the best part of the March for Life this year.”

There is little doubt that Earl will be back for her 10th march, and likely more.

“The joy and love of the pro-life movement is what makes me want to work in the movement my whole life,” she said.

Other Catholic high schools from the diocese sending contingents included The High School of Saint Thomas More in Champaign (30, including chaperones); Schlarman Academy of Danville (20); and Marquette Academy of Ottawa (15). 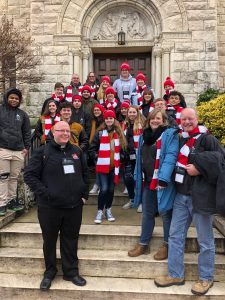 Father Jacob Rose and the Galesburg group are shown at St. Peter’s Church near the National Mall. (Provided photo)

“It was a great trip — and the most people I have ever seen there,” said Father Jacob Rose, parochial vicar for the Galesburg parishes and Sacred Heart, Abingdon. He traveled with a bus organized by Knox Country Right to Life that included 16 participants from Galesburg High School as well as groups from the Diocese of Springfield.

In addition to the march, both Catholic and public high school groups toured Washington-area monuments and museums, met with legislators at the U.S. Capitol, and took part in various Masses, conference, and youth rallies.

Father Corey Krengiel, chaplain at Marquette Academy, organized his group’s trip around themes. Thursday, for example, was “Catholic Day,” with tours of the Franciscan Monastery of the Holy Land in America, the National Shrine of the Basilica of the Immaculate Conception, and the St. John Paul II National Shrine. In the evening the group attended the “Life is Very Good” youth rally at George Mason University.

“I was one of 40 priests heaving confessions,” said Father Krengiel. “We heard thousands of confessions.”

Saturday was “America Day” for the Marquette group, with a tour of the Capitol and witnessing the changing of the guard at Arlington National Cemetery’s Tomb of the Unknown Soldier. 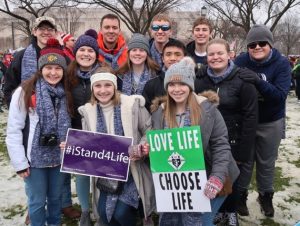 The group from Marquette Academy, Ottawa.

Paige Cottingim, a sophomore at Marquette, said she went on the trip “because everyone that went in past years said how life changing it was.” She cited a second, more personal reason.

“My mother was adopted, and being aborted could have been an option,” said Cottingim. “I’m blessed that did not happen.”

There was also a family connection for Kennedy Record, a senior at The High School of Saint Thomas More making her fourth trip to the national march.

“I got to experience this trip with my younger sister, Delaney (a freshman at STM), and both of my parents,” said Kennedy, an opportunity she called “meaningful” and “special.” Extra special was the rare honor that she and Delaney shared of helping placing the wreath at the Tomb of the Unknown Soldier during ceremonies there.

“Yes, it is amazing to see our nation’s capital and make some incredible memories with my best friends,” said Kennedy, “but to march on Washington with hundreds of thousands of people who are smiling, singing, laughing, loving our God, and radiating joy is truly life changing.” 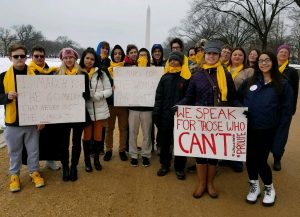 The group from Schlarman Academy in Danville. (Provided photo)

The Saint Thomas More group stayed at Blessed Sacrament Parish in Fairfax, Virginia, sleeping on air mattresses on the gym floor. Like other groups, they had to cut their touring plans a day short because of bad weather, returning on Saturday night.

Anne Sacheli, a teacher at Schlarman Academy, said the pre-rally Mass at Capital One Arena was a high point for her group.

“The music, the reconciliations, the prayers of faithful in so many languages, and of course the huge number of people worshiping together,” said Sacheli. “We also loved the speeches before the march — Republicans, Democrats, and Vice President Pence.” She and her students continue to quote wisdom from conservative commentator and author Ben Shapiro.

“Righteousness doesn’t have to be popular,” Shapiro said. “It just has to be righteous.”

The Schlarman group took a bus to Midway Airport in Chicago and then flew to Washington, D.C. Nadia Ludwig, a freshman, was happy she went.

“It strengthened my belief that abortion is wrong and needs to be stopped,” said Ludwig.

“This trip allowed me to further my education regarding abortion so I will be more readily able to defend life in the future,” said Lewis, making her first national march though she previously attended March for Life Chicago. “I feel that I have an obligation to speak out for those who are voiceless, and this trip gave me a better understanding as to why that is and how to do so.”