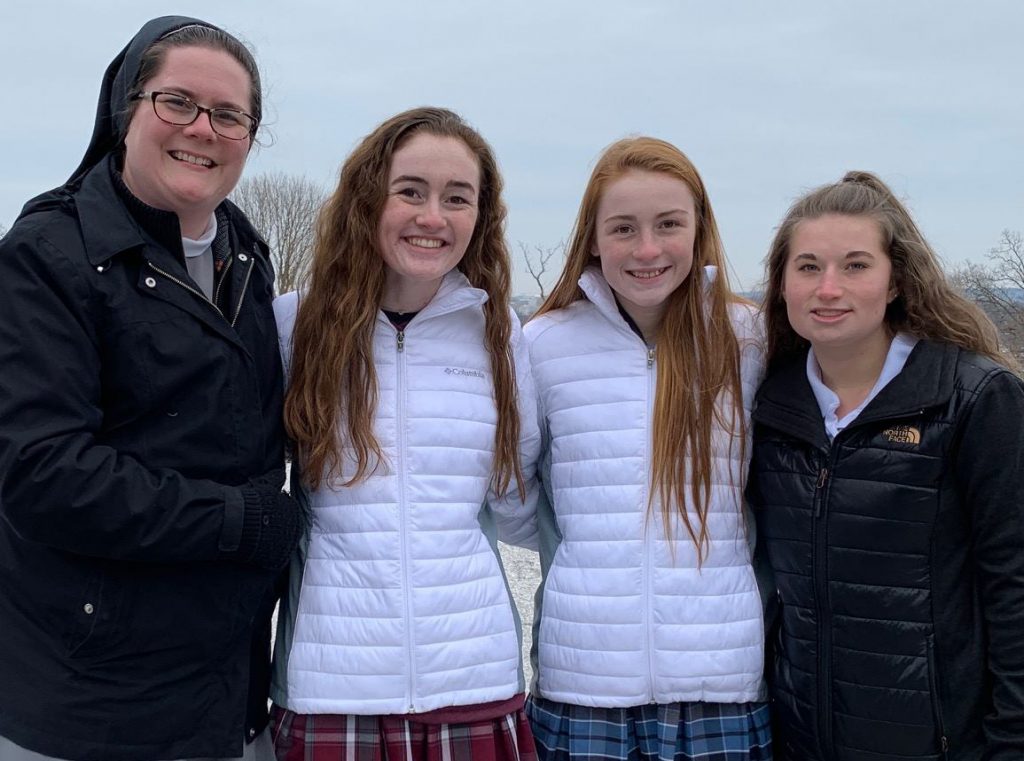 CHAMPAIGN — It wasn’t until after taking part in the solemn wreath ceremony at the Tomb of the Unknown Soldier at Arlington National Cemetery in Virginia on Jan. 17 that Kennedy Record realized she, two other students from The High School of Saint Thomas More, and a teacher had just experienced a once in a lifetime opportunity.

Specifically, the awareness became apparent to Record when a video showing the Saint Thomas More quartet — including Kennedy’s younger sister Delaney — laying the wreath was posted on the school’s Facebook site, spread quickly, and drew comments such as “What an amazing honor.” 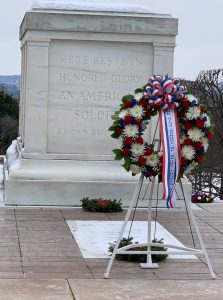 The wreath bore a ribbon signifying it was from The High School of Saint Thomas More. (Provided photo)

“My grandma commented on the post and said, ‘Your Marine grandfather is so proud,’ and it was when I read that comment that I thanked God for putting me in the perfect place at the perfect time,” said Kennedy Record.

God had a little help from Sister M. Bridget Martin, FSGM, campus minister and theology teacher at The High School of Saint Thomas More, who was among the leaders of the school’s contingent of 30 pilgrims to Washington, D.C., for the annual March for Life.

“I have many family members who have served in the military, so the cemetery is always impressive to visit,” said Sister Bridget. She said arrangements for students to carry and place the wreath had been in the works since last year.

“I didn’t know I would get to participate in the actual ceremony until a couple days before we left,” said Kennedy Record, who admitted to being nervous as a soldier explained the ritual and their responsibilities before leading them down a flight of steps to the tomb as a crowd looked on.

“I just kept thinking to myself how cool the whole thing was, especially during the playing of Taps,” she said. “After the ceremony, it all hit me. I knew it was a big deal and a huge honor.”

Kennedy, a senior, and Delaney, a freshman, got to carry and lay the wreath as Sister Bridget and Ashley Mills, a sophomore, processed with them.

“We originally had one student from each grade chosen to represent the school,” said Sister Bridget, “but one of the students did not pack a school uniform, so I jumped in as a substitute. The Cemetery has strict regulations on what can be worn for the ceremony.”

EDITOR’S NOTE: To view the video of the ceremony, visit The High School of Saint Thomas More’s page on Facebook, or click here: