Say “pilgrimage” and people usually think of the Holy Land or Ireland or Spain. For students at St. Joseph School in Pekin, however, Peoria proved to be a wonderful destination when they celebrated their patron’s feast day on March 19.

The entire student body — 131 students — boarded buses to travel to St. Joseph Church on Peoria’s south side for Mass and took the opportunity to serve the patrons at Sophia’s Kitchen while they were there. Not only did 45 of the third- , fourth- and fifth-graders decorate brown bags for some of the 600 lunches that are handed out every day, they packaged snacks and poured cups of water and hot coffee. 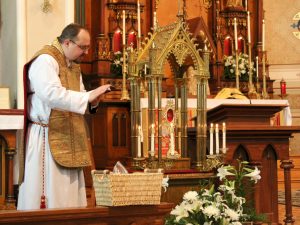 FatherJim Pankiewicz, parochial vicar at St. Joseph Church in Peoria, blesses a basket of St. Joseph Bread brought by the students of St. Joseph School in Pekin for Mass on March 19. An annual tradition, the loaves of bread are sent home with the students to share with their families. (The Catholic Post/Jennifer Willems)

They also brought enough toilet paper, toilet bowl cleaner and air freshener for the new restroom at Sophia’s Kitchen, which is located in the parish hall at St. Joseph, that some of the supplies could be sent home with the patrons.

“They were so pleased and just in awe of the church,” said Shannon Rogers, principal. “They just thought they were in heaven.”

Making the visit even more special was having Msgr. Stanley Deptula, pastor of St. Joseph and rector of St. Mary’s Cathedral, on hand to talk about the relic of St. Joseph’s cloak that was available for veneration after Mass, she said.

“Everybody wanted to touch him,” said Mrs. Rogers, adding that the students have studied the sainthood candidate and continue to follow his cause. “It’s been part of our culture.”

The St. Joseph students knew their patron saint. When Father Pankiewicz asked if anyone could share something from Scripture that St. Joseph had said, they correctly answered that he hadn’t said anything.

Father Pankiewicz noted that even though St. Joseph wasn’t quoted in the Bible, he said “yes” to God with his actions. In doing so, he became a great saint and a very happy, fulfilled person.

Everyone is called to be a saint and following God is the way to do that, he told them. 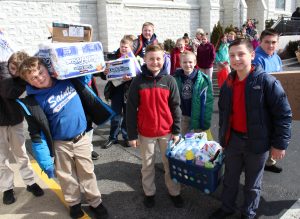 Before Mass ended, Father Pankiewicz blessed the St. Joseph Bread that had been baked by the cafeteria workers at St. Joseph School and brought to the Peoria church. Mrs. Rogers said this special bread is an annual tradition and a loaf goes home with each student to share with their family.

The pilgrimage was arranged when it looked like repairs due to water leaks and remodeling at St. Joseph Church in Pekin would take place over the feast day. Even though the work was postponed, Mrs. Rogers said they decided not to cancel the highly anticipated trip to St. Joseph in Peoria or the opportunity to give back to the community by serving at Sophia’s Kitchen.

“They really enjoyed the morning,” she said. “It was very special.”

The St. Joseph’s Day celebration at the Peoria church included a Latin Mass in the extraordinary form that evening, preceded by 30 minutes of traditional Mexican dances. A reception with Italian and Mexican pastries followed.

The day’s festivities included the blessing of the new bathroom and water fountain at Sophia’s Kitchen, which were made possible by “generous donations” from individuals who wished to remain anonymous, according to Claire Crone, manager.