Hearing about threats to human life and the God-given dignity of every person, nearly 600 people who attended the Diocese of Peoria’s first-ever Respect Life Conference explored what they could do to care for those who are most vulnerable.

Not only did that include the unborn, but also people at the end of life, men scarred by abortion, victims of human trafficking, and men, women and children who are struggling with addiction to internet pornography.

Held Friday, Sept. 13, and Saturday, Sept. 14, at the Spalding Pastoral Center in Peoria, the theme for the conference was “The Truth Shall Set You Free.” It was sponsored by the diocese’s Respect Life Ministry with corporate support from OSF HealthCare and the Our Sunday Visitor Institute.

Simultaneous translation of all the sessions into Spanish was offered by members of the Servants of the Pierced Hearts of Jesus and Mary.

The conference also had three powerful intercessors: St. Catherine of Siena, Pope St. John Paul II, and Venerable Archbishop Fulton J. Sheen. Relics for the first two were available for veneration on a table near the speaker’s podium. 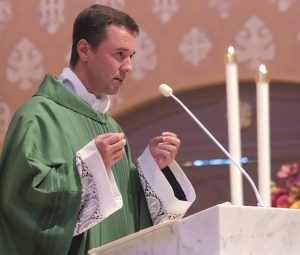 In his homily, Father Corey Krengiel told those who attended the inaugural Respect Life Conference that the Lord knows what they do on behalf of the unborn and thanks them for it. (The Catholic Post/Jennifer Willems)

The closing Mass took place at St. Mary’s Cathedral in Peoria, where Archbishop Sheen was ordained 100 years ago Sept. 20 and where his mortal remains are entombed. Many people walked to the nearby church to spend time in prayer there each day.

Welcoming conference participants as Mass started, Bishop Daniel R. Jenky, CSC, said it was “a blessing” to be able to pray with people “who are part of the army of the Lord — those who promote the Gospel of life” and those who had joined them at Mass to pray and think about life.

They also heard words of gratitude from Father Corey Krengiel, chaplain at Notre Dame High School in Peoria, who was the homilist for the liturgy.

“As I was praying about what to preach today, I had two thoughts given to me by the Lord, two simple messages to share with you,” he said. “The first is the Lord wanted me to say to you, ‘Thank you.’ You are doing his good work. He knows. He sees how much you put up with as you do his good work.”

The second message was to love and to do all things with love, even when people hate them for working to protect life, Father Krengiel said.

“It’s so important to keep this in front of our minds because there is a righteous anger that is inspired by a recognition of this terrible evil and those who are continuing to fuel it,” he told them. “But we mustn’t let our anger blind us to the fact that we are being called not just to fight for children in the womb, but also for the souls of those who are opposing us. . . . We must love.” 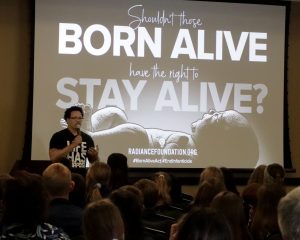 Ryan Bomberger speaks to junior high and high school students during the schools session of the Respect Life Conference on Sept. 13. Bomberger, who founded the Radiance Foundation with his wife, Bethany, engaged them students in quizzes as he did some myth busting about what organizations that promote abortion are saying. (The Catholic Post/Jennifer Willems)

The Respect Life Conference kicked off on Sept. 13 with a morning session for more than 400 junior high and high school students given by Ryan Bomberger, who founded the Radiance Foundation with his wife, Bethany. His work in defense of life has taken him around the world to talk about the worth of every human person and the beauty of and possibilities that come from adoption, as well as exposing the half-truths and misperceptions fostered by organizations like Planned Parenthood.

Bomberger also offered a session for college students and young adults that evening, and presented a third session on Sept. 14. For a story on Bomberger’s presentations, click here.

The Saturday sessions drew 170 people. Following is a list of other presenters and their topics. Click on the name to see stories on their presentations.

In his opening prayer, Father John Verrier, pastor of faith communities in Brimfield and Williamsfield, asked God to “give us the grace, through this Respect Life Conference, to inspire us all to make a single resolution just to do something to advance the pro-life culture.”