Saying that she never intended, as a woman religious, to spend so much time looking at internet pornography, Sister Marysia Weber, RSM, noted that it is one of the most common addictions in the world.

“I have been looking at this topic for 15 to 20 years and every single time I look it up, sex remains the number one search on the internet,” said Sister Marysia, who has practiced psychiatry and is now the director of the Office of Consecrated Life for the Archdiocese of St. Louis.

“There are 68 million daily pornographic search requests made. There is an average of 40 million adults who regularly view internet pornography, 10 percent of whom admit to an addiction,” she said during her presentation at the diocesan Respect Life Conference on Sept. 14. “The people who admit to an addiction are in the minority — most people deny they are addicted.” 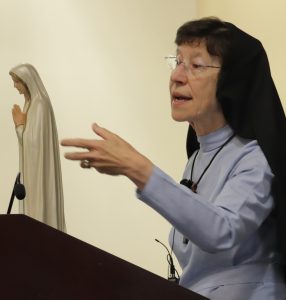 When inappropriate images and feelings come to mind, Sister Marysia advised people to use their senses to replace them with other things. (The Catholic Post/Jennifer Willems)

While men constitute the majority of users, one in three women view internet pornography, she added, and 56 percent of divorce cases involve one party having an obsessive interest in pornographic websites.

Among the startling statistics Sister Marysia shared is that 90 percent of children ages 8 to 16 have viewed internet pornography and she said “mousetrapping” can be a danger. This is when you click on a site that looks innocent but opens up to pornography. When you try to click out of it, it opens up more.

“You get trapped,” she said. “So children are unexpectedly exposed to internet pornography.”

Addiction to internet pornography is treatable, however, Sister Marysia said. Not only does this involve getting rid of images on phones and laptops and destroying pornographic materials, but purifying the memory and imagination.

When inappropriate images and feelings come to mind, she advised people to use their senses to replace them with other things. For example, look at five things in the room, feel five things, such as your feet in your shoes, or try to identify five smells.

Sister Marysia added that they could call out to Jesus, make the sign of the cross, pray to Our Lady or say the prayer to St. Michael the Archangel, pray the rosary and really concentrate on each mystery, or keep Scripture passages around the room.

“As Catholics, we have a wealth of sacramental resources,” she reminded them. That includes confession and daily Mass.

People shouldn’t be afraid to seek professional help if they need it, Sister Marysia said.