While many people wouldn’t include human trafficking on a list of respect life issues, it goes against everything that God desires for his people, according to Sister Mary Angela Alexander, RSM, the last speaker of the day.

“Everything that you have heard before — abortion, racism, sexism, absent fathers, the breakdown of relationships between men and women, all of these come together in human trafficking,” she said, noting that most people don’t know that their lives have been impacted by it. That’s because on the surface victims may look like everyone else.

“Labor trafficking often preys on the most vulnerable of our society, especially those in poverty,” said Sister Mary Angela, director of the Catholic Campaign for Human Development and Catholic Relief Services of the Diocese of Phoenix, Arizona. She was among the speakers Sept. 14 at the diocesan Respect Life Conference.

One of the major forms of this is bringing people into the country, taking away their papers, and then telling them that they’ll be in trouble with the law if they say anything, she said. This isn’t true, but they don’t know that. 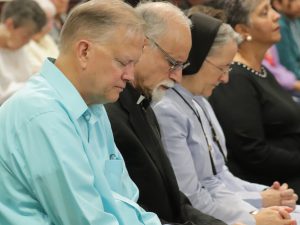 Domestic service is an area where victims of human trafficking are often found. Others include agriculture and farming, restaurants and food service, retail, landscaping, construction, carnivals, eldercare and manufacturing, Sister Mary Angela said, adding that they are moved often so they can’t form friendships.

“Look at the person taking care of your nails and your hair. Do they look back at you? Can they make small talk? Can they chit chat about things? Or do they focus on their work,” she asked.

One way everyone is impacted, whether they realize it or not, is by the inexpensive clothing available here. Sister Mary Angela said so much of it is made overseas by people who are living above the shops where they work. Paid very little, they are fed less.

“The worst form of trafficking in the United States is sex trafficking,” Sister Mary Angela said. No longer referred to as prostitution because that implies a choice, it is now called sex work.

Cute movies like “Pretty Woman” give a false impression because those who buy sex are not handsome and generous, she said. “A woman who has been trafficked cannot be sweet and innocent, because she’s suffered trauma for years.”

The average age when a girl will be drawn into being sold is about 13, while the average age for a boy is 11. Malls are common places for predators to find and groom their victims, Sister Mary Angela said.

She encouraged people to learn more about the topic and watch for signs, such as tattoos of crowns or barcodes, which is how traffickers keep track of and sell those in their control. Prayer is also needed, she said.

“We need to teach our children who they are, that they are created in the image and likeness of God,” Sister Mary Angela said. “They are worth more than they will ever know.”