When it comes to leaving a legacy, perhaps there is none better than “to let Jesus Christ be known and loved,” and that’s how the principals and pastors of schools around the Diocese of Peoria remembered a dear friend and colleague gone too soon.

“I think Randy Simmons’ legacy is that you go to Peoria Notre Dame and you know that Christ is known and loved,” said Father Kyle Lucas, school chaplain, during an emotional tribute to their principal, who died unexpectedly on Feb. 19.

Simmons, named the 2019 Distinguished Principal for the Diocese of Peoria, was honored posthumously at a Mass and luncheon to mark the end of the school year. Accepting the award on his behalf was his wife, Patti, who comforted Father Lucas as he spoke. 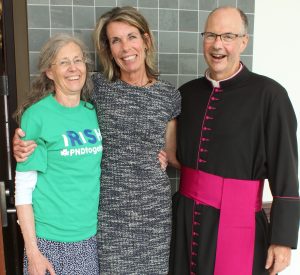 The luncheon included recognition of anniversaries of service, with the administrators and clergy called forward by Dr. Sharon Weiss, superintendent of Catholic schools. Offering his congratulations and a token of his appreciation was Bishop Daniel R. Jenky, CSC.

Among them was Weiss herself, who accepted with good grace the jokes made about knowing Moses and the disciples on a first-name basis as she was honored for her 40th anniversary in Catholic education.

Bishop Jenky wasn’t left empty-handed. The principals brought cards, pictures and notes from the students to let him know that they were praying for him and for his intentions.

“We thank you for your tremendous leadership and love for our schools,” Weiss said.

In his office that afternoon, as he looked over what had been presented, Bishop Jenky said he was truly touched by the spiritual bouquets and thanked the schools for thinking of him and remembering him in prayer.

During his homily at the Mass, concelebrated with the school pastors and parochial vicars in the Our Lady of Perpetual Help Chapel in the Spalding Renewal Center in Peoria, Bishop Jenky said human beings always seem to be hungry.

“Only God is as endless as human desire,” he told the educators and those from the Office of Catholic Schools, as well as members of the diocesan staff. “For the infinite hunger in our hearts and souls, God has an infinite, unending reality.”

What sets us free is letting God be God, Bishop Jenky explained.

“If we give our young people a taste of the Lord, an experience of God, if we open their minds and hearts to values and truths that truly are without end, we will prepare them for great blessings in this life,” he said.

Those who were recognized for doing just that included the four principals who are retiring or leaving their current role. They are Sheila Cromien of Visitation Catholic School in Kewanee, David Hobin of Alleman High School in Rock Island, Joe McDaniel of Holy Cross School in Champaign, and Rick Pantages of St. Mary School in Kickapoo. (See the related story here.) 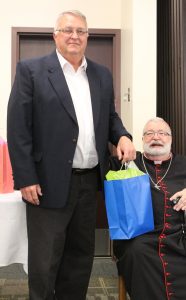 Weiss thanked them for “answering Christ’s call to serve, pray, and lead in our Catholic schools.”

Marking milestones of service are:

While the Distinguished Teacher, Distinguished Pastor and Distinguished Principal were all featured in the Catholic Schools Week issue of The Catholic Post (Jan. 20, 2019), the luncheon gave their colleagues an opportunity to expand on what had been said when the announcement was made in December.

Patsy Santen, principal at St. Vincent de Paul School, praised Lohr, a kindergarten teacher, for embodying what it means to be a Catholic school educator.

“She sees her job as a vocation with the souls of her students as her first priority,” Santen said.

“She is a wonderful example of an effective teacher and religious dedication to St. Vincent’s. It has not only been a pleasure working with Mrs. Lohr, but it has been an honor as well,” Santen said. “This honor is well deserved. Know that she is another beautiful example of all the wonderful teachers that we have here in our diocesan schools.”

Dr. Noreen Dillon, principal at St. Mark School in Peoria, said Msgr. Brownsey is “a constant reminder of why we do what we do.”

“I give thanks each day that you have been called into this ministry with us,” she told him. “I watch as you lead and teach us in so many ways each week — listening to us, celebrating with us, mourning our losses, and being present to us in so many ways in our lives. I thank you for being our Distinguished Pastor.”

In honoring Simmons, Father Lucas said the Distinguished Principal award is one he certainly deserved — even if he didn’t want the attention.

“Think of Randy and the enthusiasm and the joy he gave his whole life to in that ministry,” Father Lucas said. “What he leaves for us to contemplate and consider always is that every day, every moment . . . Jesus Christ may be known and loved, and that transforms lives. It transforms the world.”