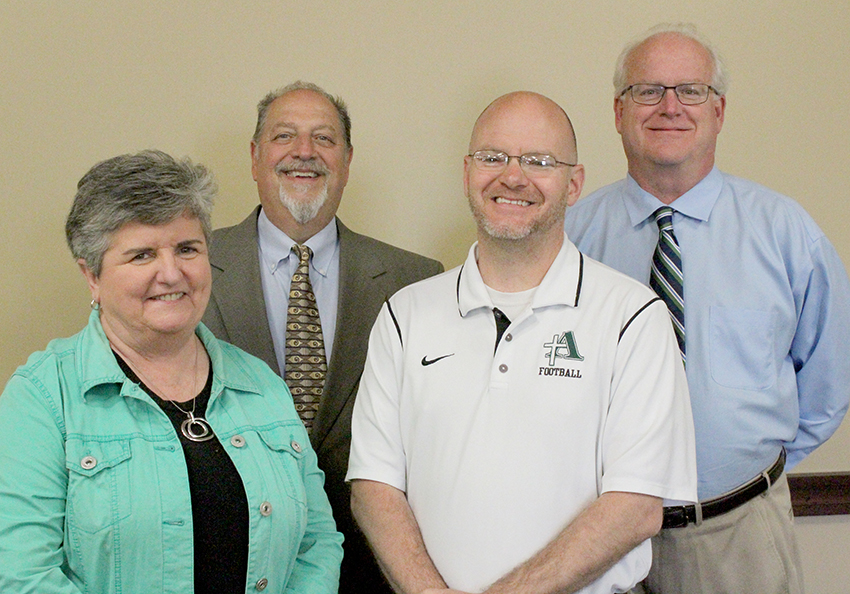 Four principals are preparing to retire or make changes as the school year comes to an end. They are (from left) Sheila Cromien of Visitation Catholic School in Kewanee; Joe McDaniel of Holy Cross School in Champaign; David Hobin of Alleman High School in Rock Island; and Rick Pantages of St. Mary School in Kickapoo. (The Catholic Post/Jennifer Willems)

Saying they will miss the family atmosphere at their schools and seeing the students and their parents every day, four principals are making changes as summer begins.

Retiring are Sheila Cromien, who has led Visitation Catholic School in Kewanee since 2013; Joe McDaniel, who has served as principal or co-principal of Holy Cross School in Champaign for two years; and Rick Pantages, who has been principal at St. Mary School in Kickapoo since 2014.

Stepping down after five years as principal at Alleman High School in Rock Island is David Hobin.

All four were recognized at a Mass and luncheon hosted by the Office of Catholic Schools on May 8.

Travel looms large on the horizon for Cromien, who said principals don’t get enough time off in the summer to be able to do that as much as she’d like. 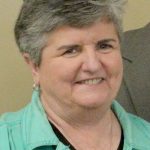 Her first stop is Washington, D.C., to celebrate her nephew’s eighth grade graduation. This makes her 15th trip to the nation’s capital with nieces, nephews or students from Annawan Grade School, where she taught prior to coming to Visitation.

She will also travel to Tanzania this summer for a trip led by Father Johndamaseni Zilimu, pastor at Saint John Paul II in Kewanee. That will include attending an ordination in Swahili and seeing the work he supports through Children of Hope and Faith.

November will take her to the Holy Land for the first time.

Cromien said she also looks forward to spending time with family and helping out where she can.

After 40 years as a teacher or principal, the time was right to step away, she told The Catholic Post. What won’t leave is her love for the people at Visitation.

“It really is a family here, and I’ll miss seeing those kids and their parents regularly — joking with them and just being a part of their family, as they’re a part of the whole Visitation family,” she said.

Hobin and Cromien have something in common — he was principal at Visitation Catholic School from 2009 to 2012. He served as assistant principal at Alleman High School for one year before succeeding Colin Letendre as principal in 2015. 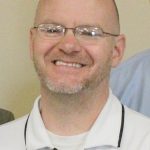 He also has experience as a special education teacher in Peoria Public Schools and in the Black Hawk Area Special Education District in the Quad Cities, and was principal at Lourdes Catholic School in Bettendorf, Iowa, for two years.

After five years at Alleman, it’s time to pursue something different, Hobin said. “I definitely miss teaching and coaching, so that’s one possibility,” he told The Post.

He doesn’t have to think for very long about what he’ll miss most about Alleman.

“The kids. The kids here are truly amazing,” Hobin said. “I’ve learned that any task they’re given or any challenge they’re given, they always meet it.”

“Everyone who comes in here says it, but you can truly feel that it is a family here,” he said. “It’s just amazing how close everyone one is. It’s truly a family. I’m going to miss that a lot.”

If his name on the list of retiring principals sounds familiar, that’s because McDaniel tried it last year, too. He stepped back in to help Holy Cross School for one more year as the search for a new principal continued, this time sharing duties with former Holy Cross principal Rose Costello. 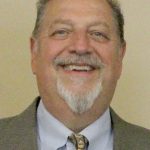 He hopes to stay involved, however, and has already been recruited to serve on a committee for next year’s fundraiser.

McDaniel has spent much of the last 40 years as a teacher or principal at Catholic schools in central Illinois. That includes nine years as principal at St. Matthew School in Champaign.

Like Cromien and Hobin, he said he’s going to miss the students and teachers, and noted that Holy Cross has a strong family atmosphere.

When he’s not helping to support Holy Cross — and all Catholic education — McDaniel will continue to sell real estate. He also hopes to travel with his wife, Gayanne, and spend more time with his grown children and grandchildren.

Pantages came to St. Mary in Kickapoo after 35 years in Peoria Public Schools and said working in a Catholic school has been a wonderful experience. 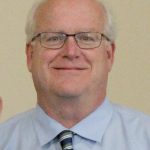 Having the opportunity to serve as an extraordinary minister of holy Communion at school Masses on Wednesdays and Fridays has been a highlight, according to Pantages.

After 40 years, it was time to retire, though, he told The Post, noting that his wife, Maureen, retired last June after 29 years as secretary at Washington Gifted School.

Pantages won’t miss the alarm at 5:15 each morning, but knows that when August rolls around he’ll likely have some withdrawal pains.