SPRINGFIELD — Legislators representing people from districts in the Dioceses of Belleville, Peoria, Rockford and Springfield received visits from hundreds of their constituents on March 20, who urged them to vote “no” on what is being called the most extreme abortion legislation ever introduced in Illinois.

The Life Advocacy Day was sponsored by the Catholic Conference of Illinois and drew 600 people from the four dioceses, including 60 from the Diocese of Peoria. The day will be repeated April 3 for pro-life advocates from the Archdiocese of Chicago and Diocese of Joliet. 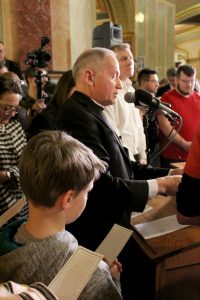 Bishop Thomas Paprocki of Springfield leads the Advocacy Prayer for Life at a rally sponsored by Illinois Right to Life Action, Pro-Life Action League, and Illinois Family Institute, which was held in the Capitol rotunda on March 20. “Never give up,” he told pro-life advocates. (The Catholic Post/Jennifer Willems)

The event coincided with a rally sponsored by Illinois Right to Life Action, the Pro-Life Action League, and the Illinois Family Institute. It filled the Capitol rotunda with nearly 4,000 people that afternoon, and officials stopped anyone else from entering the building as a safety precaution.

Among the speakers was Bishop Thomas J. Paprocki of the Diocese of Springfield, who encouraged them to “Never give up.”

“My friends in the pro-life movement, we are in a David-and-Goliath situation,” Bishop Paprocki said, noting that Planned Parenthood, the mainstream media, and politicians are Goliath.

The battle is over HB2467 and SB1594, bills that seek to repeal the Parental Notice of Abortion Act, and HB2495 and SB1942, which would establish the Reproductive Health Act.

Zach Wichmann, director of government relations for the Catholic Conference of Illinois, called them “terrible pieces of legislation.”

The Reproductive Health Act, he said, “would declare abortion a fundamental right, and moreover, would say that the state has absolutely no interest in the well-being or protection of the unborn.”

“This bill goes way beyond Roe v Wade,” Wichmann told those gathered for a legislative briefing in the auditorium of the Howlett Building, located near the State Capitol, as the day began. “It says anybody can have an abortion at any time, for any reason, from conception to birth. That is the true extremity of this bill and that’s what we need to talk about.”

He added that the bill would undermine women’s health by removing abortion clinics from regulatory control by the state. It also eliminates the requirement that a coroner investigate when a mother dies during an abortion.

Another objectionable part of the bill, according to Wichmann, is that all health insurance programs in the state would be mandated to cover abortion.

As the bill stands now, surgical abortions would not need to be performed by a doctor, although the Catholic Conference has been informed that the legislation will be amended to remove that provision.

Repealing the Parental Notice of Abortion Act would make Illinois the only state in the Midwest that does not have a law requiring minors to inform their parents that they are getting an abortion, Wichmann said. 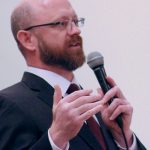 “Since this law went into effect in 2013, we have seen a 57 percent drop in abortions on teens in Illinois,” he said. “This law has saved literally thousands of lives.”

Illinois is surrounded by states that require parental notification or consent, so repealing the law could make Illinois a haven for sex traffickers or adult abusers who want to hide evidence of their crimes against minor girls by bringing them here for abortions, Wichmann explained.

“That bill is about the health and safety obviously of the baby, but also of these young girls who are in terribly difficult positions and who deserve the support of their families, their parents and especially the state. The state should not be saying they can do whatever they want,” Wichmann told them.

The time to act is now, he said, because SB1594 passed the Senate Public Health Committee on March 19.

In a statement released after the vote, the Catholic Conference of Illinois said it was “truly tragic.”

The main goal of the Life Advocacy Day was for people to meet with their legislators and then “ask the question.” 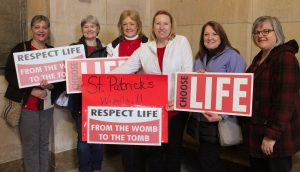 Preparing for a busy day of meeting their legislators and distributing fact sheets about bills that would repeal the Parental Notice of Abortion Act and establish the Reproductive Health Act are (from left) Cecilia Sone, director of respect life ministry for the Diocese of Peoria; Pam Elliott, Sandy Snow, Patty Hermes and Karen Powers of St. Patrick in Wapella; and Suzie Meismer, ministries coordinator and supervisor for Catholic Charities of the Diocese of Peoria. (The Catholic Post/Jennifer Willems)

“Make your point on these bills and then ask: ‘Can I count on you to vote “no” on these bills?’ Don’t leave the meeting until you ask that question,” Wichmann said, advising them not to argue, yell or be confrontational.

“I know all of you are passionate about this issue, but if you want to help, have a calm, reasoned discussion,” Wichmann said.

That’s what five women from the Peoria area did when meeting with Sen. David Koehler, D-46th, who informed them he planned to support the legislation.

“There were many points brought up by those of us who spoke with him,” said Karen Guth, a member of St. Vincent de Paul who is involved in 40 Days for Life. “He did say that for some of those, he might look into them.”

Guth added that Koehler was very gracious and said, “We told him that we would pray for him.”

As for the abortion legislation, “I could not be more opposed to these bills,” Weaver told them.

Peoria Notre Dame junior Erin Earl said it was worth taking a day from classes to be in Springfield.

“Even if you’re not comfortable talking to legislators, to be out there and show your presence there, I thought that was important for our group to do,” she told The Catholic Post.

She also had a message for those who couldn’t be there March 20.

“I think it’s so important to write letters to legislators, write emails,” Earl said. “Try to communicate in some shape or form, even if it’s not in a face-to-face conversation. Trying to reach out is going to be really important with this issue.”