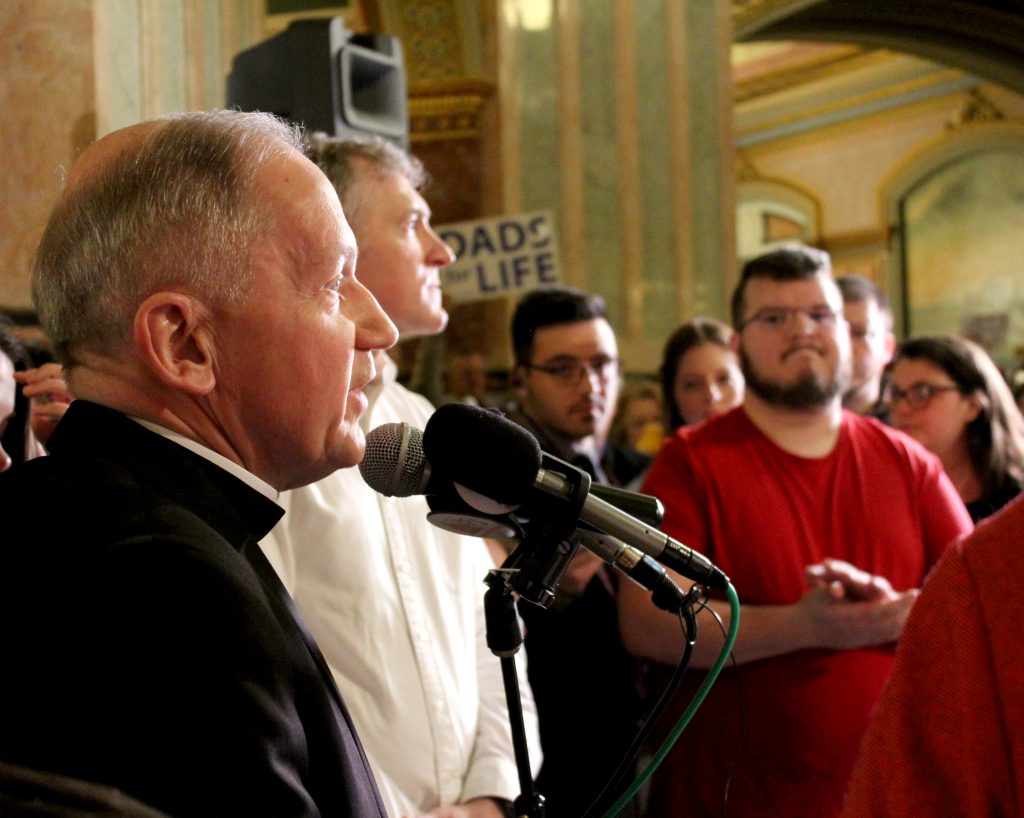 SPRINGFIELD — After visiting their state legislators, those who attended Life Advocacy Day on March 20 joined more than 3,000 other pro-life advocates to raise their voices in opposition to extreme abortion legislation being considered in the Illinois General Assembly.

The theme for the rally, sponsored by Illinois Right to Life Action, the Pro-Life Action League, and the Illinois Family Institute, was “Vote NO on HB2467 and HB2495” and the people who filled the Capitol rotunda chanted the word “no” over and over again as elected officials, clergy and pro-life activists spoke.

“We are here today to tell our legislators that if they do not put life and women first in the State of Illinois they do not have a place in our statehouse,” said Mary Kate Knorr of Illinois Right to Life Action.

Introduced as “one of the greatest pro-life champions” was Bishop Thomas J. Paprocki of Springfield, who called out several of today’s pro-abortion Goliaths. Among them, he said, is the Democratic Party, which has become “the party of abortion.”

“They have Gov. J.B. Pritzker, who is about to make Illinois the most pro-abortion state in the country,” Bishop Paprocki said. “We’re not going to let that happen are we?”

The answer was a resounding “No!” from rally participants.

“It might seem that we are going to be overpowered and overwhelmed by the pro-abortion forces, the Goliaths of our country. But my friends, the pro-life movement never gives up,” Bishop Paprocki said. “Have that same strength of conviction that David had when he faced Goliath and put all your faith in God and his mighty power to overcome.”

Rep. Terri Bryant, R-115th, said one way to make an impact on lawmakers is to fill out witness slips for these bills. That registers opposition to the proposed laws and she said she would do what she could to make certain every witness slip is read.

For more information on how to file a witness slip, see the Council Comments column in the March 17, 2019, issue of The Catholic Post or visit illinoisrighttolife.org.

Information on the legislation and how to contact lawmakers can be found at the website of the Catholic Conference of Illinois, ilcatholic.org. One of the action steps offered is to join I-CAN, the Illinois Catholic Advocacy Network, to receive updates and alerts.