In more than two decades of ministry, Msgr. Gregory Ketcham touched countless lives. Among them were the many students at St. John’s Catholic Newman Center in Champaign who discerned their vocation to the priesthood, consecrated life and holy marriages from the way he celebrated Mass and boldly proclaimed the Gospel with his life during his eight years there.

That influence was seen at his funeral on Feb. 12, when three young priests of the Diocese of Peoria concelebrated his Mass of Christian Burial — at his request — with Bishop Daniel R. Jenky, CSC. 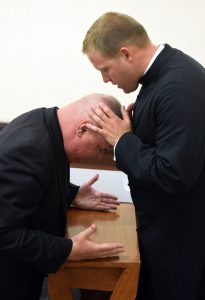 After his ordination last May, Father Lee Brokaw prays over his mentor, Msgr. Gregory Ketcham, who was fighting a brain tumor. (The Catholic Post/Tom Dermody)

“That came as a surprise to me,” said Father Kyle Lucas, who is chaplain at Peoria Notre Dame High School and in residence at St. Philomena in Peoria. Still, he felt “honored and blessed” to be able to do it.

“As a priest we strive so hard and we invest our lives to the proclamation of the Gospel and making Christ present to people. As we go through life, we trust that God is producing fruit from that,” he told The Catholic Post. “I felt like we were able, in our small way, to be a small sign of the fruit of Monsignor’s priesthood.”

While he wasn’t afraid to bring someone close to the question and say, “You need to think about this,” Msgr. Ketcham inspired more than one vocation by the way he celebrated Mass.

“He really entered into the Mass,” said Danny McShane, who received permission to leave his theology studies at Mount St. Mary’s Seminary in Maryland long enough to attend the funeral. “He didn’t take the Mass for granted at all.”

“It was very joyful, but very intentional,” Father Lucas said. “He adored the Eucharist and he adored his priesthood. That was something that resonated with me.”

He noticed that at the consecration, Msgr. Ketcham would almost be lost in the moment. “He knew Jesus was there,” Father Lucas explained.

That thought sparked his own discernment for the priesthood.

“If that’s true, then how can I not follow the Lord to become a priest, to every day be so close to that mystery of bringing Christ present to his people,” Father Lucas said.

McShane remembered that it took a long time for Msgr. Ketcham to purify the chalice and ciboria after Communion. He said he sometimes grew impatient because he had classes or other commitments to get to.

McShane credits Msgr. Ketcham for helping him to encounter Christ in such a way that it sparked a conversion in him during his freshman year at the University of Illinois and sent him to the library to learn more about his Catholic faith. When the time came, the priest also bought a plane ticket so McShane could visit Mount St. Mary’s Seminary and drove him to the airport in Indianapolis. 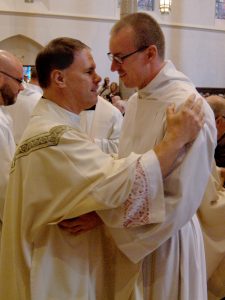 “He was really fatherly. He knew I needed to go visit seminary because we had talked about it many times,” McShane told The Post. “On that trip to the seminary is where I heard God’s call, when I heard God say, ‘I want you for my priest.’

“I owe my vocation to Msgr. Ketcham,” he said.

While he was aware that his ministry at St. John’s Catholic Newman Center was in the Diocese of Peoria, Msgr. Ketcham knew the majority of the students were from other dioceses and wanted to help them discern their vocations, too. One year he attended four ordinations in two weeks, according to Father Baker.

On the day he left for Mount St. Mary’s, Father Baker said he had to leave very early in the morning, but Msgr. Ketcham got up at 4 a.m. to celebrate Mass for him.

“That was really impactful,” Father Baker said. “That left a huge mark on me.”

Whenever he called to check on Father Baker, Msgr. Ketcham would ask how all “my boys” were doing.

One of those “boys” was Father Brokaw, who told The Post before his ordination last May that Msgr. Ketcham had planted a seed while serving at his home parish, St. Patrick in Raritan, and Immaculate Conception in Monmouth. “I ignored it, denied it, but it never left me,” he said.

“Then I went to the University of Illinois and he came in as chaplain when my sister and I were there,” Father Brokaw said. “He was the first one who ever introduced priesthood to me.”

McShane said Msgr. Ketcham challenged him to pray a lot, because it was only through serious prayer that he would know his vocation from God. The chaplain developed a discernment group for the young men to foster that prayer and give them a support system. 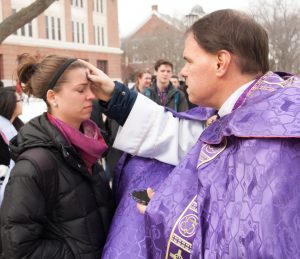 He was also supportive of the women religious who worked on campus and visited from time to time, Sister Sarah Roy, OSF, told The Post.

“His passion for his own vocation was very evident. He loved sharing his vocation story with the students,” said Sister Sarah, who worked with Msgr. Ketcham for six years at the Newman Center in Champaign.

She added that he hosted “Stump the Priests and Nuns” on a regular basis in order to help the students feel comfortable relating to priests and religious and see those vocations as an option for their lives.

“He was so proud every time a student discerned a vocation to the priesthood and religious life,” Sister Sarah said.

That care and concern continued even after ordination or profession of vows.

“The last four or five years, whenever we would talk on the phone, he would say, ‘I’m proud of you,’” Father Baker recalled. “Hopefully, I will continue to make him proud of me.”

EDITOR’S NOTE: For more on Msgr. Ketcham’s life and ministry, see his obituary and excerpts from his funeral homily.