That proved to be true Feb. 4, when Auxiliary Bishop Christopher Glancy, CSV, of the Diocese of Belize City-Belmopan in Belize, returned to his hometown to celebrate the troop’s 100th anniversary. Joining him were alumni of Troop 109, many of whom are still involved in Scouting inside and outside the Quad Cities. 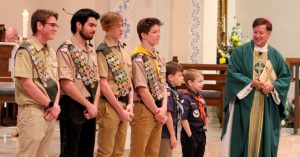 After Sacred Heart’s Scout Sunday Mass, which included recognition of the six young men who would be receiving awards at the Diocesan Scout Mass the following weekend, a reception was held in Culemans Hall so old friends could view memorabilia, have a bite to eat, and catch up.

Bishop Glancy, who was baptized, received his First Communion and was confirmed at Sacred Heart and graduated from Alleman High School in Rock Island, said it was good to back.

“How wonderful it is today to see that the Scout tradition continues with the Cub Scouts and Boy Scouts that are here,” he said, standing in the church’s main aisle to give his homily. “It continues to be a group to pass on to our young people the values of who we want to be as human beings, how we can be of service to one another, how we can reach out and help.”

Being involved in Scouting at Troop 109 helped Bishop Glancy to recognize that everyone has gifts to share and to value each person for who they are. He added that they took any opportunity they could to serve, whether it was at the altar or setting up tables for a parish event.

“We were happy to do it,” he said. “It was ingraining in us who we were to be, how to work to be for one another.”

Bishop Glancy would go on to achieve the rank of Eagle Scout in 1977 — one of 107 young men who have earned that distinction since the troop was chartered in 1918. On deck are Alex DeWitt, Branden Gusse, Samuel Maynard and Ian Snider, who are in various stages of identifying, researching and fundraising for their own Eagle Scout projects. All four received the Pope Pius XII Award at the Diocesan Scout Mass. 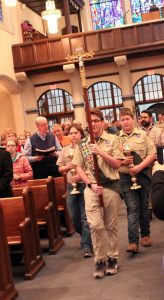 Samuel Maynard carries the cross into Sacred Heart Church in Moline as the Mass for Scout Sunday begins Feb. 4. (The Catholic Post/Jennifer Willems)

The bishop said that what they were doing at Sacred Heart Church that morning is another important part of Catholic Scouting.

“When we gather together to hear the word, sing songs of praise and greet one another in peace, it puts you in a better place so you can serve, be more in touch with the gifts you have, so you can embrace the grace God has given you, “ he said, urging them to be generous with those gifts.

Bishop Glancy also encouraged them to make time for God in their lives, as well as prayer.

“Let us follow the example of (Jesus) so the good that God wants for each of us might continue to grow, right here at Sacred Heart Parish, right here at Troop 109, right here in our world,” he said.

Organizations to help boys learn about the outdoors and life skills were already in place when W.D. Boyce brought the Boy Scout model to the United States from England in 1910. By 1918, the Daniel Beard Boys at Sacred Heart were ready to affiliate with the Boy Scouts, too.

In fact, Troop 109 predates the actual construction of the current Sacred Heart Church, according to Jeremiah Houtekier, the troop’s committee chairman. They’ve been meeting on Monday evenings in the hall named for Father J.B. Culemans, the priest who encouraged those early Scouts, since it was built and dedicated in 1964.

A hallmark of Troop 109 is that everyone is welcome, Houtekier said, and they have helped many young men who are in the area for short periods of time due to their parents’ work to achieve their Scouting goals.

The troop includes families who have been involved for generations. Houtekier’s father, Jerome, was an Eagle Scout and an active member of the committee at Sacred Heart, and Houtekier and his brother, Benjamin, each attained the rank of Eagle Scout. His sons, Connor and Zachary are currently members of Troop 109, and his wife, Shellie, is the assistant Scoutmaster.

“It’s the service. It’s the values. It’s the community and family,” Shellie Houtekier said. “I, myself, have learned being in the organization. It’s an incredible organization to be part of, it really is. It just exemplifies what it means to be a good person in general.”