‘The heart of Scouting is to really be like Jesus,’ says bishop at recognition Mass 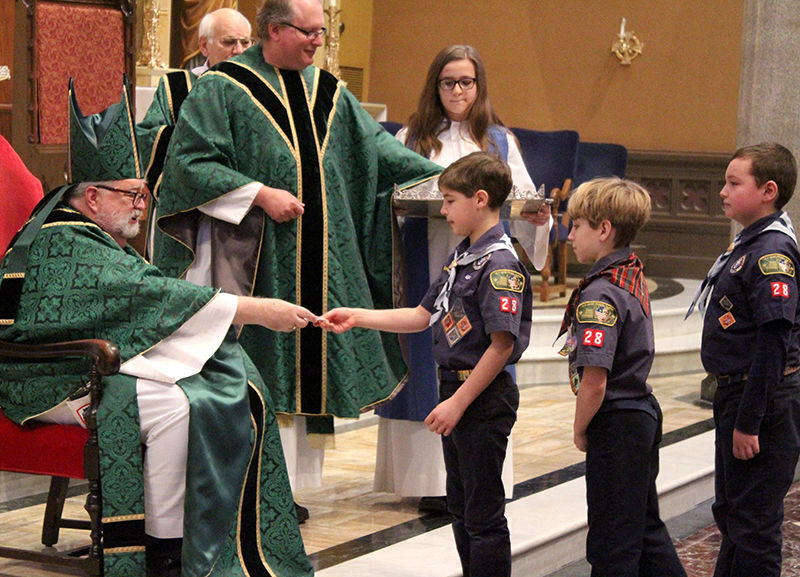 Mitchell Goddard, Julian Sturm and Bear Gangloff of Pack 28 from St. Thomas the Apostle in Peoria Heights, receive the Parvuli Dei emblem from Bishop Jenky during the Diocesan Scout Mass on Feb. 11 at St. Mary Cathedral in Peoria. (The Catholic Post/Jennifer Willems)

Scouting gives young people valuable skills to navigate life, including camping out and tying knots, but those aren’t the most important things, according to Bishop Daniel R. Jenky, CSC.

“Most of all in Scouting, you learn how to be givers, you learn how to help one another, you learn to meet needs when you encounter them. So the heart of Scouting is to really be like Jesus,” he told the members of the American Heritage Girls and Boy Scout troops from around central Illinois who attended the Diocesan Scout Mass. The young people and their families filled St. Mary’s Cathedral in Peoria for the celebration on Feb. 11. 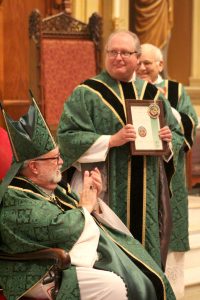 Bishop Jenky leads the applause for Father Glenn Harris, who has served as diocesan Scout chaplain for 25 years. He received the Golden Bow Award at the annual Scout Mass, which was celebrated Feb. 11 at St. Mary’s Cathedral in Peoria. (The Catholic Post/Jennifer Willems)

Bishop Jenky presented about 40 religious emblems to the Scouts, but had a suggestion for one more during his remarks as Mass began.

“Since this annual Scouting Mass usually takes place in the dead of winter, I’d recommend that you initiate snow badges for all the young folks who come here and brave the weather,” he quipped, as laughter rang out in the cathedral.

Until that becomes a reality, those who attended received a green patch with a bishop’s miter and crosier embroidered on it, as well as the words “Scout Mass” and the date.

The awards presentation included recognition for adults involved in Scouting, too.

Father Glenn Harris, pastor of St. John the Baptist in Rapids City and St. Mary in Hampton, received the Golden Bow Award in recognition of his 25 years as diocesan Scout chaplain.

“As part of my Boy Scout background — I was an Eagle Scout and a member of the Order of the Arrow — something that was drilled into me and reaffirmed in my vows as a priest was even in the midst of weighty tasks and responsibilities to give cheerful service,” said Father Harris who was a member of Troop 2 in La Salle as he was growing up.

He also credited Scout leaders for encouraging him to go to church and to consider the priesthood.

“This is my way of giving back, because I consider the very fact that I’m a priest today as a result of my involvement in the Boy Scout program,” Father Harris told The Catholic Post.

The Bronze Pelican emblem was presented to Chad Beckett of Urbana for making “an outstanding contribution to the spiritual formation of Catholic youth” in Troop 9 at Holy Cross School, Champaign. Also receiving the Bronze Pelican was Tim Hendrickson of Epiphany, Normal, who has been active with Pack 25 and Troop 20 as Cubmaster and assistant Scoutmaster for more than 10 years. 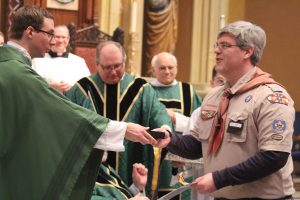 There was a surprise for Bishop Jenky, too. He received the 2017 Quality Diocese Award, but since it wasn’t listed in the program he didn’t know about it until it was announced by Linda Atherton, chair of the Diocese of Peoria’s Catholic Committee on Scouting, and presented by Father Harris.

In addition, Atherton called forward John DeWitt, Scoutmaster for Troop 109 of Sacred Heart in Moline, to accept a token of appreciation for the troop in honor of its 100th anniversary. (See the related story.)

“TELL EVERYONE ABOUT JESUS”

Atherton told The Post that in all, 119 emblems have been earned by the young people so far and she expects to receive names through the end of the school year. Those American Heritage Girls and Boy Scouts who didn’t come to St. Mary’s Cathedral will receive their awards in their home parishes.

In the Gospel for last Sunday, Jesus heals a leper by touching him and saying, “Be made clean.” Because he didn’t want to become “a sideshow miracle worker,” Jesus adds, “Don’t tell anyone about this.

But the leper told everyone about Jesus, Bishop Jenky said, encouraging the Scouts to do the same thing. 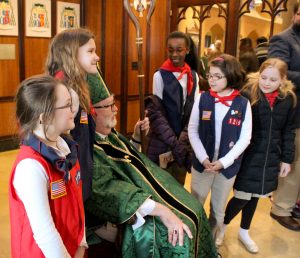