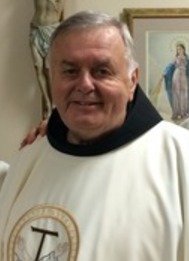 CHICAGO — A Mass of Christian Burial will be celebrated at 11 a.m. on Saturday, Jan. 20, at St. Michael the Archangel Church here for Father Luke Poczworowski, OFM Conv., a former pastor of parishes in Peoria, Wenona, Lostant, Minonk, Rutland, and Toluca.

Born in Chicago on Dec. 16, 1937, to Stanley and Mary Poczworowski, he was raised in St. Michael the Archangel Parish. After graduating from Mount Carmel High School, he entered the novitiate of the Conventual Franciscans in Lake Forest.

He continued his education at the University of Dayton and then studied theology at Assumption Seminary in Chaska, Minnesota. He was ordained at the Cathedral of St. Paul in St. Paul, Minnesota, on Feb. 22, 1964.

In 1969, after several summers of study, Father Luke received a master’s degree in religious education from Loyola University in Chicago.

Father Luke’s assignments in the Diocese of Peoria included serving as pastor of Holy Family Parish, Peoria, from 1981 to 1988. He returned to the diocese in 2005 as pastor of St. Mary, Wenona, St. John, Lostant, and St. Patrick, Minonk, adding duties as pastor of St. Ann, Toluca, and Sacred Heart, Rutland, in 2012. He served the cluster of parishes until 2014, when he moved to Milwaukee and lived in residence at the Basilica of Saint Josaphat.

In a 2014 interview with The Catholic Post on the occasion of the 50th anniversary of his ordination to the priesthood, Father Luke said he enjoyed being a priest and being a Franciscan.

“Community is very important to me,” he said. Father Luke counted celebrating Mass, baptisms and even funerals as graced moments in his ministry because those are occasions he could enliven the faithful “with the Holy Spirit and give them what they need to stay close to the Lord.”