Asked what non-Spanish speaking Catholics of the Diocese of Peoria should know about the region’s growing Hispanic population, Sister Isabel Romero, SCJTM, had a ready reply:

“We are more than what you think we are,” said the diocese’s new Director of Hispanic Ministry, pointing to a recent census that puts the figure at 50,000 — and rising rapidly.

She quickly went beyond the numbers to talk about the values, respect for family life, and the “great treasure of devotion” that Spanish-speaking Catholics offer our local church.

Sister Isabel, a native of Mexico, brings a unique set of gifts and talents to her new position. For the past nine years, she has been involved in food preparation at Nazareth House in Henry. It was her first assignment after professing final vows as a member of the Servants of the Pierced Hearts of Jesus and Mary.

Sister Isabel said her years at the retreat center prepared her well for her new diocesan role.

“It’s not about food,” she said of her kitchen duties, recalling the direction given to her by the foundress of her community, Mother Adela Galindo. “It’s about showing love, through food.” The food preparation duties brought her into contact — and friendship — with clergy and lay people throughout the diocese as she prepared favorite dishes and served them with her trademark joy.

Also serving Sister Isabel well will be the master’s degree she earned last year in religious studies from Regina Apostolorum Pontifical University. She now teaches an online course for the university, and plans to be among the teachers in a “School of Faith” being planned to form leaders in the Hispanic community.

Sister Isabel says her top priority, however, will be to help foster unity, both among the diverse Hispanic populations of central Illinois as well as with the non-Spanish speaking members of parishes.

“We are the people of God,” said Sister Isabel. “We speak a different language. We have a different culture. But we are one. God calls us to unity, and Bishop (Daniel) Jenky is very clear with that vision.” 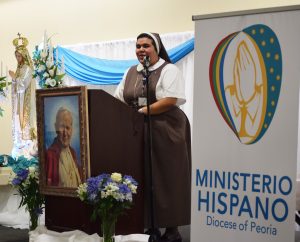 The Hispanic Ministry’s new logo is in the foreground as Sister Isabel Romero, SCTJM, speaks Aug. 19 at the Spalding Pastoral Center in Peoria. (The Catholic Post/Tom Dermody)

The first major event sponsored by the revamped Hispanic Ministry — a celebration last Saturday of the centennial of the Blessed Virgin Mary’s appearance at Fatima — embodied both aspects of unity. After hundreds of Spanish-speaking Catholics from throughout the diocese and beyond spent the day together at the Spalding Pastoral Center, they processed as a group down Madison Avenue to St. Mary’s Cathedral, where they joined in a Mass Bishop Jenky celebrated for crowds who had come to venerate the touring relic of St. John Paul II.

“We try to unite, not separate,” said Sister Isabel, pointing to a new Hispanic Ministry logo that features interwoven elements including the hands of Our Lady of Guadalupe, the colors of flags from nations where Spanish is spoken, 12 stars symbolizing the Blessed Virgin — all assembled within the shape of a heart. Even the words point to unity, with “Ministerio Hispano” in Spanish and “Diocese of Peoria” in English.

The logo was found on t-shirts, hats, and bags offered for sale at Saturday’s event, and on a banner that led the group in procession to the cathedral.

For a working example of unity, Sister Isabel points to her religious community, whose motherhouse is in the culturally diverse city of Miami.

“What the bishop seeks is exactly what we live in the convent,” she said. “Here I am Mexican, but we have Sisters from many different cultures. Yet we are one.

“The way we relate to each other and different cultures, when I get that happening in the diocese, we’ll get it right,” she added.

Helping Sister Isabel in the Hispanic Ministry office are two Sisters of the Sacred Heart and of the Poor — Sister Reyna Hernandez and Sister Marina Ramirez — who coordinated the ministry in recent years when it was under the umbrella of Catholic Charities.

“They are truly a blessing,” said Sister Isabel. “They have a lot of years working in Hispanic ministry, and I learn a lot from them every day.”

But she acknowledges the task ahead will be challenging.

“We have a lot of limitations,” said Sister Isabel, including an insufficient number of Spanish-speaking priests to serve the growing population. But she praised the diocese’s priests — both those who speak Spanish and those who do not — for their “generosity of heart” and “great efforts” to minister to Hispanics in their parishes.

The “School of Faith” is just one of the plans for the new Hispanic Ministry office. To be offered in four regions of the diocese, it will educate and form lay leaders, who will then take the lead in forming others. An evangelization campaign is also envisioned to provide basics of the faith for those not coming to church.

Other plans call for a major diocese-wide celebration of the feast of Our Lady of Guadalupe at St. Mary’s Cathedral in Peoria, a retreat for altar servers, and the establishment of a representative council to foster better communications around the diocese.

Re-emphasizing the unity theme, Sister Isabel said the goal of Hispanic Ministry is not to develop a separate pastoral plan for Hispanics, but to be the channel whereby the teachings of Bishop Jenky and the programs of the Diocese of Peoria are made available to that population as well.