Harry Penne knew that Fulton Sheen was an archbishop, had been declared venerable, and was born “not so far away.” But it was a personal connection that made the sainthood candidate an ideal choice for the paper he submitted to the Fall 2016 Catholic Textbook Project History Essay Contest.

A fifth-grader at St. Jude Catholic School in Peoria, Penne discovered that Sheen had been an altar server and was ordained at St. Mary’s Cathedral — the same church in which he had been baptized. His mind was made up. 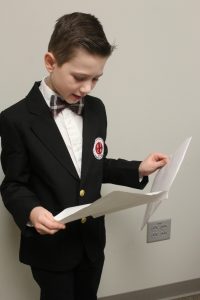 “Learning about Venerable Archbishop Fulton J. Sheen makes me want to strive for holiness, and he is a good example for me to follow,” wrote Harry Penne in his winning essay. (The Catholic Post/Jennifer Willems)

“I didn’t really think of any others,” he said simply.

Penne’s essay took top honors in the contest’s Catholic School Division, Grade 5. It can be read in full here. He won $100 for his work, and St. Jude School will receive a $400 gift certificate for the Catholic Textbook Project’s store.

He will use his prize money to donate groceries to St. Jude’s chapter of the St. Vincent de Paul Society.

Penne didn’t write the essay as an assignment, but for extra credit in David Rudolph’s social studies class. His grade was nearly an A and he wanted to “bump it up.”

He was able to learn more about Venerable Fulton Sheen during a field trip to St. Mary’s Cathedral in November, where he and his classmates walked through the Holy Door for the Year of Mercy. They also visited the Archbishop Fulton J. Sheen Museum at the Spalding Pastoral Center. “That was really helpful,” he said.

The fact that Sheen had won an Emmy for his television show, “Life Is Worth Living,” impressed Penne, as did his work at The Catholic University of America.

“Learning about Venerable Archbishop Fulton J. Sheen makes me want to strive for holiness, and he is a good example for me to follow,” he wrote.

Penne is the son of Heather and Eric Penne.