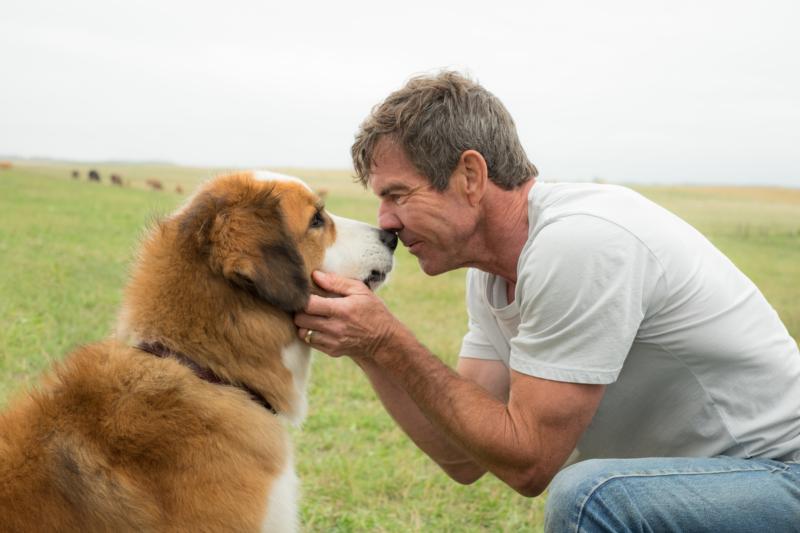 Dennis Quaid stars in a scene with a dog named "Buddy" in the movie "A Dog's Purpose." The Catholic News Service classification is A-II -- adults and adolescents. (CNS/Universal)

Pet lovers will revel in this slight but charming tale of a clever canine (voice of Josh Gad) and his adventures over a series of lifetimes as he is repeatedly reincarnated. His most significant bond is with a little boy (Bryce Gheisar) who grows into a high school football star (KJ Apa). Though he finds support in the love of his mother (Juliet Rylance) and, later, that of his girlfriend (Britt Robertson), the athlete’s life is increasingly darkened by his father’s (Luke Kirby) worsening alcoholism. During other intervals, the pooch serves as a police dog (trained by John Ortiz) and brightens the life of a lonely single gal (Kirby Howell-Baptiste).

While free of anything genuinely objectionable, director Lasse Hallstrom’s screen version of W. Bruce Cameron’s best-selling 2010 novel is too potentially frightening for the smallest pups. And some grown viewers may find the four-legged protagonist’s New Age-style philosophizing a bore. Still, a good-hearted romantic wrap-up matching characters played by Dennis Quaid and Peggy Lipton as well as some droll humor throughout keep things cuddly.

Mature themes, including alcohol addiction, possible cohabitation, some stylized violence with brief gore, scenes of peril, light scatological humor. The Catholic News Service classification is A-II — adults and adolescents. The Motion Picture Association of America rating is PG — parental guidance suggested. Some material may not be suitable for children.