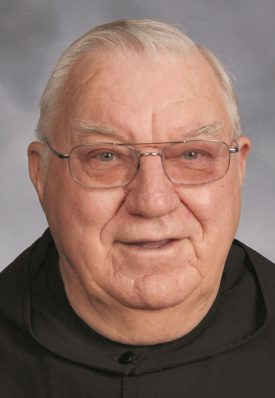 Abbot Philip Davey, OSB, of St. Bede presided at the funeral liturgy. Interment was in the abbey cemetery.

Born Jan. 2, 1931, in Peoria to Edmund and Clara Hessling, he attended St. Joseph School and Spalding Institute. He then enrolled at St. Bede Junior College in Peru, earning an associate’s degree in 1950, the year he entered the abbey. He would receive a bachelor’s degree from St. John’s University in Collegeville, Minnesota, three years later.

Father Ambrose served as the manager of the abbey’s print shop for nine years. From 1966 until 2010, he was in charge of the abbey powerhouse and grounds crew.

For many years Father Ambrose was also active in ministering to divorced and widowed Catholics through the Benedictine Religious Education Center. He served several terms on the abbey’s senior council, played the organ for abbey church services, and offered weekend assistance at area parishes.

He is survived by one sister, Suzanne (Mike) Fleissner of Madisonville Tennessee, and three nieces: Denise Barto of Reston, Virginia; Yvonne (Tim) Sippy of Cedar Rapids, Iowa; and Janine (Steve) Terrell of Peoria.

Memorial gifts may be directed to St. Bede Abbey.