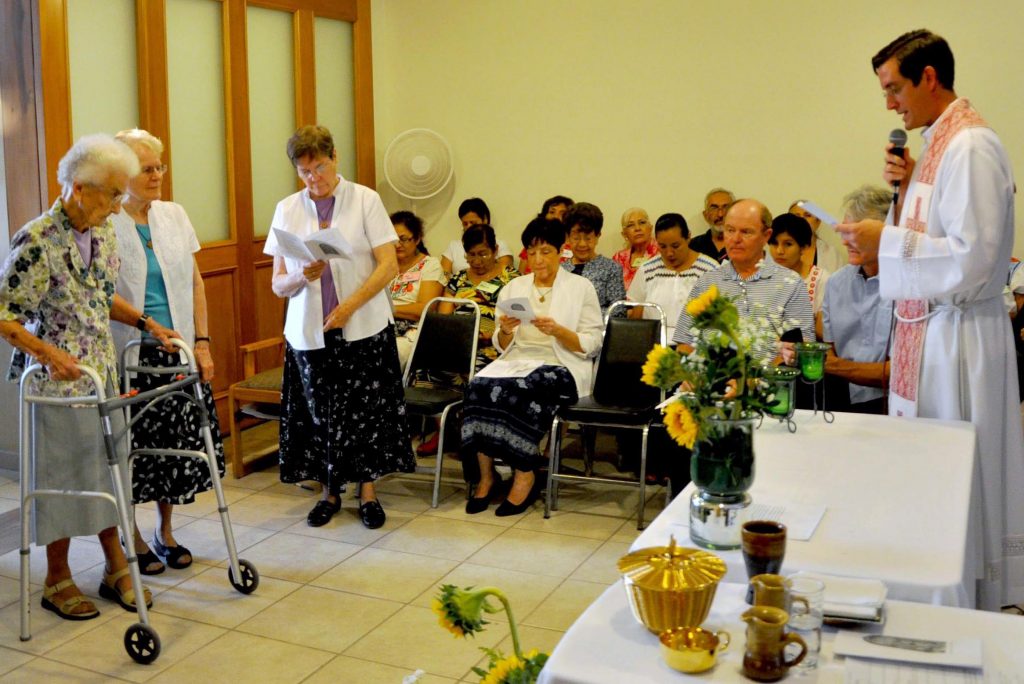 Our Lady of Guadalupe is a thread running throughout Peoria native Sister Mechtild Swearingen’s remarkable 66 years of ministry in Mexico.

The 1941 graduate of the Academy of Our Lady in Peoria, born Nora Jean Swearingen, was praying to Our Lady of Guadalupe when — in 1950 as a young  member of the Benedictine Sisters of Mount Scholastica based in Atchison, Kansas — she made the decision to join community members who six years earlier had established a new teaching mission in Mexico City.

Two of the schools at which she taught or administered were named Colegio Guadalupe, including one Sister Mechtild helped establish to serve low-income families in Santa Maria Tulpetlac, the town of the fifth apparition of Our Lady of Guadalupe. She would later serve as its principal for two decades. 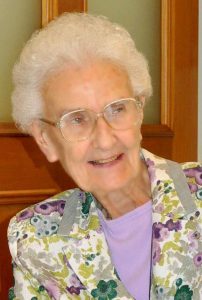 “Her devotion to Our Lady of Guadulape was, and still forms, a central part of her spirituality,” says Sister Patricia Henry, OSB, who lives with Sister Mechtild, now 93, at Pan de Vida Monastery in Torreon, Mexico.

And that’s just an initial glimpse into the long and diverse service in Mexico of a woman who, despite having left the city 75 years ago, still happily tells visitors “I’m from Peoria.”

Her many relatives remaining in the Peoria are even more proud to claim Sister Mechtild as one of their own.

“It’s been a joy that we’ve been able to have her as a part of our family,” said nephew Mike Swearingen, a member of St. Ann Parish in Peoria. On the occasions when Sister Mechtild was able to come back to Illinois for a wedding or just a brief summer visit, he said, “it was always a big deal, an event.”

“My grandparents would have a party, and relatives and friends would come over and have an opportunity to talk to her,” said Swearingen. He described his aunt as a “caring, compassionate person” who “always encouraged the nephews and nieces to do their best.”

For grandnephew Father Vincent Giacabazi, SJ, a 2000 Peoria Notre Dame graduate, that “best” would lead him to become a Jesuit priest.

“She would step off onto the tarmac with her veil flowing in the wind,” he told The Catholic Post. “There was great anticipation and love. It was always a great homecoming.”

Sister Mechtild’s last Peoria visit, in October of 2015, was a more somber one. Slowed by a recent broken hip, she returned for the funeral of her beloved younger sister, Marge O’Neill, a longtime member of St. Vincent de Paul Parish.

“When Sister Mechtild was up here she said she’d love to have her nieces and nephews, grandnieces and grandnephews come down to Mexico and see her,” said Swearingen. 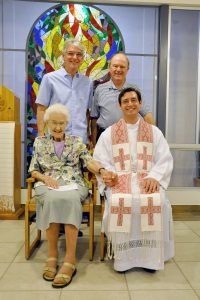 So Swearingen, his cousin Dan O’Neill — now of Dallas, Texas — and Father Giacabazi started planning a visit. This summer, they traveled to Sister Mechtild’s residence in Torreon.

A highlight of that visit was Father Giacabazi’s celebration of a Mass in Spanish at the monastery in honor of Sister Mechtild’s 71 years of religious life.

“It was absolutely beautiful,” said Swearingen of the Mass and the social gathering which followed and was attended by more than 100 community guests.

It was also a happy payback for Father Giacabazi, who cites Sister Mechtild’s example as an influence on his vocation, which has included Hispanic ministry. Sister Mechtild was present in 2015 for his ordination and first Mass in New Orleans.

After his homily, Father Giacabazi led Sister Mechtild and another Benedictine, Sister Michele, in the renewal of their vows. A lasting memory will be of his 92-year-old great aunt practicing a sung portion of her vow formula.

“To see my great-aunt singing in this beautiful voice a hymn of devotion to Christ, renewing her life, and wanting to make it a special moment and beautiful for Jesus was touching for me,” said Father Giacabazi.

While in Torreon, the trio asked to again hear Sister Mechtild’s vocation story, and the native of St. Bernard Parish in Peoria told how, after two years at Mount St. Scholastica College in Atchison, she responded to God’s call to become a Benedictine Sister. She taught in parish grade schools in Atchison and St. Joseph, Missouri, before volunteering to join the mission team in Mexico in 1950. That decision would set the course for the remainder of her life.

In addition to teaching and administrative duties, Sister Mechtild was prioress of St. Benedict Monastery in Mexico City from 1968 to 1980.

She also found time for other projects, including catechism classes for children who lived in the hills beyond the school in Tulpetlac; missions with her students during school vacations to poor rural communities; service as a volunteer nurses’ aid in a state-run hospital; and assisting in a program to help adults get their grade or high school certificates.

“It’s been a joy we’ve been able to have her as a part of our family.” — Mike Swearingen

At the age of 77, she joined the Benedictine Sisters at Pan de Vida Monastery, located in a low-income neighborhood of Torreon, a large city in the north central Mexican state of Coahuila. She would serve several more years as a teacher of English as a second language. Only recently has Sister Mechtild slowed a bit, but remains a prayerful welcoming presence at the monastery.

Her trio of guests over the summer saw firsthand the service the Benedictines provide.

“They deal with a tremendous amount of poor people,” said Swearingen. Sister Mechtild is one of only three U.S.-born Benedictines serving in Torreon, and their mission no longer receives financial support from the community’s headquarters in Kansas.

For Father Giacabazi, Sister Mechtild’s devotion to Our Lady of Guadalupe is evidenced every time he celebrates Mass.

His chalice includes a depiction of the face of Our Lady of Guadalupe that came from a pendant Sister Mechtild gave to Marge O’Neill, Father Giacabazi’s grandmother.

“My grandmother wore that faithfully for years and years,” said Father Giacabazi, who asked his grandmother before she died if he could include it as part of the chalice his mother, Nora O’Neill, was presenting to him for his ordination.

“So on that chalice is that image of Our Lady of Guadalupe,” said Father Giacabazi. “It’s all the important women in my life — my great-Aunt Mechtild, my grandmother and my mother all contributed to the chalice in some way.”