PEKIN — Elections end with winners and losers, unless the contest is held at St. Joseph School. Students here used Election Day to cast votes in a “Sainthood Ballot” where all the candidates are winners ultimately.

The ballot included six candidates — two Servants of God, two Venerables and two Blesseds — who are being studied by the Vatican’s Congregation for the Causes of Saints. While living good and holy lives has made all of the candidates winners, the students campaigned to convince the “electorate” that their nominee should move forward. 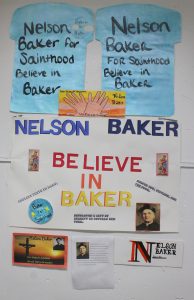 The “campaign” for each sainthood candidate was charged with creating a t-shirt, slogans, bumper stickers, a jingle and radio spot, which was presented as part of the morning announcements at St. Joseph School in Pekin. The process also included caucuses, a primary election and speeches. (The Catholic Post/Jennifer Willems)

“They researched the lives of these candidates and then we followed along the usual political scheme,” said Joan Moore, who teaches sixth, seventh and eighth grade religion and directed the unit.

“We started with four candidates in each category, so we had a caucus where they were able to talk about the research they had done on all four candidates,” she told The Catholic Post. “Then we had some lobbying going on for the candidate they thought was most worthy.”

A “primary election” narrowed the field to two candidates in each category and “campaign managers” were elected. They directed the work to create campaign slogans, jingles, bumper stickers, t-shirts, posters and radio spots, which they presented in the form of announcements.

The eighth-graders studied those who have been declared Servants of God, which is the step taken when a person’s cause for sainthood is accepted by Vatican. They started with Father Jozef Cyrek, Dorothy Day, Sister Elizabeth Prout, and Father Stanley Rother.

In the end, the slate placed before the voters included Day, who founded the Catholic Worker Movement in New York with Peter Maurin and championed the poor, and Father Rother, a priest of the Archdiocese of Oklahoma City who was martyred on July 28, 1981, while serving in Guatemala.

Moore said the seventh-graders researched the candidates who are Venerable, a title assigned to a candidate for canonization after the initial investigation into their life results in the pope’s determination that they demonstrated heroic virtues. The four original candidates were Mother Catherine McAuley, Bishop Frederic Baraga, Msgr. Nelson Baker and Mother Maria Kaupas.

The candidates who advanced to the general election were Bishop Baraga, who was ordained in Slovenia but worked for many years among the Ojibwa and Ottawa in Michigan and was the founding bishop of the Diocese of Marquette, and Msgr. Baker, a priest of the Diocese of Buffalo, New York, who operated soup kitchens and a hospital, as well as homes for unwed mothers, homeless and troubled boys, and abandoned infants. 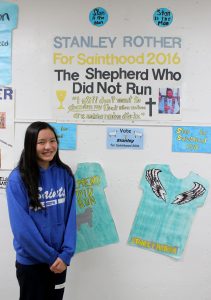 Eighth-grader Sophia Sison stands next to the “campaign” display her team created for Father Stanley Rother. In addition to a a poster, it included a t-shirt design, campaign slogans and information about the Servant of God. (The Catholic Post/Jennifer Willems)

Noticeably absent from the Venerable ticket was the name of Archbishop Fulton J. Sheen, who was a native of El Paso and priest of the Diocese of Peoria. Moore said they decided not to use him because fifth grade teacher Katie Bogner does a unit about him with materials she developed.

“Our kids are Fulton Sheen experts, thanks to Miss Bogner’s curriculum. He is tops on our list around St. Joseph School,” Moore said. “We love him!”

That would have given one team an unfair advantage, she explained, so they focused on other Venerable candidates to “widen the students’ knowledge base.”

“We did it this way so they could learn that there are so many wonderful role models out there for us to discover,” she said.

The sixth-graders had responsibility for the Blessed candidates — those who have had one miracle attributed to their intercession and been beatified: Sister Anne Catherine Emmerich, Cardinal John Henry Newman, Archbishop Oscar Romero and Father Xavier Seelos.

The final ballot was a race between Sister Emmerich, a 19th-century Augustinian nun who developed the stigmata — wounds corresponding to those of the crucified Christ — and was known for her visions of and “conversations” with Jesus, and Archbishop Romero of San Salvador, El Salvador, who was martyred while celebrating Mass on March 24, 1980.

The fifth-graders were invited to participate and heard persuasive speeches by each campaign before voting. 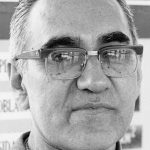 “They haven’t been through the research so the information they’ve gained is through the posters in the display and then listening to the speeches,” Moore said. “That added another layer, so we’ll be able to discuss that after we see the results: Why do you think the fifth grade vote went in this direction? What could they have strengthened in their campaign? What would you do differently if you ran the campaign again?”

Moore set up a simulated voting booth in a closet near the classroom. The students cast their ballots by placing them in a specially designated (and decorated) box and Moore tallied the votes at the end of the school day.

If the students at St. Joseph had their way, the causes for Servant of God Father Rother, Venerable Bishop Baraga and Blessed Archbishop Romero would advance. 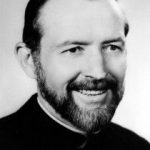 “They all acknowledged one another — ‘Oh, your candidate has such great virtues, heroic virtues. We just kind of think our candidate should advance first,’” Moore told The Post. “It was very positive and they were very affirming of one another.”

“Working together with everyone was fun,” said eighth-grader Ariana Gerard, who served as the campaign manager for Father Rother. “It was nice to be able to work with our classmates to form an amazing project. It was fun.”

“We want our students to know that it’s OK to live your faith and be a good citizen at the same time. That’s what exercising the right to vote is really all about,” Moore said. “It’s voting our conscience and our faith should guide us in what our conscience should tell us is best. . . . We’re good Catholics first and good citizens second.”