While they are very good with robot design, members of the First Lego League team from St. Jude Catholic School in Peoria – known as the Firecrackers – are also making noise for their skills in cooperating with God’s design for the planet.

A composting project the eight-member team organized at their school helped the squad of fourth-graders earn the Rookie Team Award at the state tournament in Champaign earlier this year.

Solving a problem involving trash was among the challenges judged in this year’s competition, which promotes science and technology education and also involves the building and programming of robots. 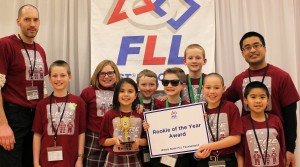 “We wanted to do something within our school,” said team member LJ Higgs. “We learned that most garbage made within schools occurs during lunch time.”

Because St. Jude Catholic School already had a recycling project, the Firecrackers opted to begin a school-wide composting program. They placed a new bin next to the recycling bin in the school cafeteria, and encouraged all students to deposit their organic lunch leftovers in the new container.

More than 100 pounds of food scraps are now being collected each month for use in enriching the soil of parish and school gardens. But first the scraps must undergo a three-to-six month process that involves the help of bacteria, microbes, carbon dioxide, heat, fungi and even worms and slugs in breaking down the pile of organic matter and creating a natural, nutrient-rich fertilizer.

That biological magic is now taking place in a separate bin at the home of Neil and Annette Ninnam, head coach and mentor coach for the team.

“These kids took it upon themselves to implement their project,” said Neil Ninnam.

EDUCATION, STEWARDSHIP, AND A CHALLENGE

But the enterprising Firecrackers did even more.  Knowing they had to explain their project in competition, the squad chose not to do a “boring” presentation and instead wrote and acted out an original skit, “The Princess of Mount Trashmore.”

“We wanted it to stand out,” said Nathan Ninnam.

The residents of Mount Trashmore “didn’t know about composting or recycling so they threw all their garbage out the window,” explained fellow team member Harry Penne. After being educated by a princess, the mountain’s residents began composting and “now have the nicest land in the entire Kingdom,” he added.

Because not all food scraps can be composted, team members had to educate other St. Jude students “so people wouldn’t be putting like ice cream in the bin,” said Eliot Lynch. They created a poster to explain the types of organic materials accepted, including apple cores, banana peels, fruit rinds, egg shells, etc., but no meats, dairy products, or prepared foods like pasta. They also performed the skit for several classes.

School cafeteria worker Jen Flaherty is mindful of the compost bin. On a recent day she added scraps from hundreds of strawberries she had cut.

“We talk about stewardship of resources,” said Heather Penne, another of the team’s mentor coaches. “We want to be good stewards of the food we have. We don’t want to be wasteful.” One hundred pounds of food is enough to feed 200 people, the students learned.

As Earth Day approaches on April 22, the Firecrackers are challenging other schools to begin their own composting programs. And they are willing to share their tips and experience, citing the twin goals of spreading awareness and helping the environment.

“First Lego League has taught us how to work as a team and help others outside of FLL,” said LJ.