CHAMPAIGN — The Door of Mercy at St. John’s Catholic Chapel was well used on Divine Mercy Sunday as people entered to seek the sacrament of reconciliation, pray before the Blessed Sacrament, and sing the Chaplet of Divine Mercy together.

The door swings both ways, however, Father Daniel Gifford reminded them during his reflection on Divine Mercy that afternoon.

“The heart of Christ is always drawing us closer to himself, enabling us to be in communion with him and communion with his heart, that we may love as he loves,” said Father Gifford, assistant chaplain at St. John’s Catholic Newman Center at the University of Illinois. “Divine Mercy is not only a gift that we are to receive, but a gift we are to share.” 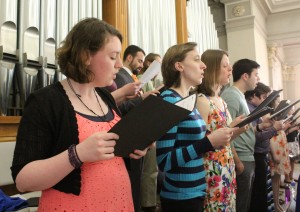 A “super choir” of members from all five choirs at St. John’s Catholic Chapel in Champaign provided music for the 5 p.m. Festival Mass for Divine Mercy Sunday. (The Catholic Post/Jennifer Willems)

The sacrament of reconciliation, which is part of the celebration of Divine Mercy Sunday, restores us to grace, allowing us to approach the altar worthily, he said. The sacrament was available during eucharistic adoration from 11:30 a.m. until just before the 5 p.m. Mass, with four priests hearing confessions at one point as people lined up on the chapel steps to wait their turn.

“My brother priests and I have had the great joy of devoting ourselves all afternoon to making this sacrament available, so that as souls enter through the Mercy Door, to enter more deeply into his heart and be restored to that grace, that the Door of Mercy may be open to the world and you may share that gift with others,” Father Gifford said. “May the gift of mercy we receive today fill us and overflow to all the world.”

In his 14th Festival Letter, “Divine Mercy,” Bishop Daniel R. Jenky, CSC, encouraged regional celebrations around the diocese to help people understand and receive all the graces associated with Divine Mercy Sunday. Most of them took place at the churches where the Mercy Doors of the Diocese of Peoria are located: Queen of the Holy Rosary Shrine in LaSalle, Sts. Peter and Paul Church in Nauvoo, St. Robert Bellarmine Chapel at St. John Paul II Catholic Newman Center in Normal, and St. Pius X Church in Rock Island.

Sacred Heart Church in Peoria was designated as a Mercy Door site, but the regional celebration of Divine Mercy was held at St. Philomena Church.

The Nauvoo observance also included eucharistic adoration and the sacrament of reconciliation, with the Chaplet of Divine Mercy sung at 3 p.m. During his reflection, Father Thomas Szydlik, parochial vicar for the Hancock County Catholic parishes, spoke about how the images of the resurrected Christ continue to picture Jesus with the wounds of the crucifixion.

“Couldn’t he have had the wounds healed in his rising from the dead,” Father Szydlik asked people to consider. “Of course! But our God is a God of truth . . . and so Jesus bears the wounds on his body. But the truth of the effects of sin is swallowed up by the glory of the resurrection.”

What dominates, then, is the mercy of God, he said. We have sinned, but with his resurrected body Jesus says, “Look what has been done with your sins! You have nothing to fear. Mercy overcomes any sin we may commit.” 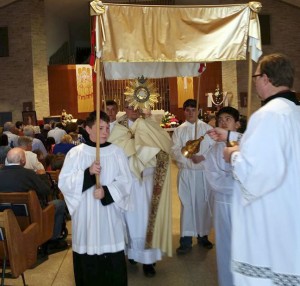 At the regional gathering at St. Pius X Church in Rock Island, Father Glenn Harris said, “If there was any time to rediscover the beauty of Divine Mercy, it will be now.”

There were many reasons why Pope Francis had called for this Jubilee Year of Mercy, including the 50th anniversary of the closing of the Second Vatican Council, Father Harris said, but there’s something more.

“Perhaps what Pope Francis is sensing is this: the loss of our first love for spreading the Gospel,” said the pastor of St. John the Baptist in Rapids City and St. Mary in Hampton. “Perhaps, we as a Catholic culture, have become so jaded and disillusioned by the infighting, by the corruption, by the scandals that we have seen in the church that the appeal of Divine Mercy has been lost on most people.”

That could explain why 24 percent of millennials — those born after 1980 — don’t believe in anything or anyone anymore.

The good news is that Divine Mercy isn’t confined to one day, Father Harris said.

“Divine Mercy is available to us every day in a variety of ways,” he emphasized. “Each day there are plenty of opportunities to receive the sacraments, to make amends, to reach out and be a channel of Divine Mercy to someone else. Divine Mercy will never be exhausted.” (The complete text of his reflection can be found at thecatholicpost.com)

Father Harris also announced that St. John in Rapids City would host 40 Hours of eucharistic adoration in honor of Divine Mercy, starting on Thursday, June 23. The speaker will be Al Barbarino, a Secular Franciscan whose music ministry supports the poor.

“We are inviting him back in the hopes that he will help us rediscover that first love — a love that perhaps some of us have misplaced — so we could go into the world and proclaim, ‘Divine Mercy is still available. It’s available to anyone who wants it.’” 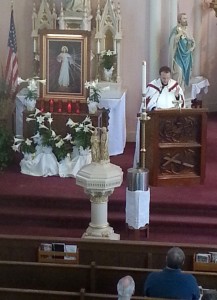 St. Peter and St. Thomas provide good examples of what God’s mercy can do, said Father Luke Spannagel in his homily at the 5 p.m. Mass at St. John’s Catholic Chapel in Champaign last Sunday. The former denied Jesus and the latter declared he would not believe in the resurrection without proof.

Father Spannagel, head chaplain and director of St. John’s Catholic Newman Center, said God’s mercy was able to take the voice that denied Jesus and turn it into “a proclaiming voice, one that shares the truth. It can take the feet that once ran away and transform them into bold feet to take the Gospel wherever it needs to be.”

He called Thomas “a great gift to us,” particularly in the way Jesus responded to his request for proof.

“Jesus says directly to Thomas, ‘Whatever the obstacle is, Thomas, I’m going to answer it right now. Let’s fix this and get past it.’ I think Jesus says that same thing to us.”

There’s no fault or failing that’s too big for Jesus, Father Spannagel said. He invited those who filled the chapel to take a moment, name the obstacles, burdens and struggles in their lives, and then pray the Divine Mercy prayer: “Jesus, I trust in you.”

“Let him show you,” he encouraged them. “Let him say, “Let’s fix this and go forward.’”