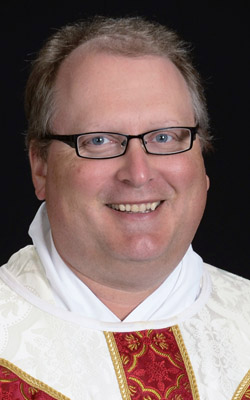 A reading from the Holy Gospel according to Luke:

“Jesus returned to Galilee in the power of the Spirit, and news of him spread throughout the whole region. He taught in their synagogues and was praised by all.

“He came to Nazareth, where he had grown up, and went according to his custom into the synagogue on the Sabbath day. He stood up to read and was handed a scroll of the prophet Isaiah. He unrolled the scroll and found the passage where it was written: ‘The Spirit of the Lord is upon me, because he has anointed me to bring glad tidings to the poor. He has sent me to proclaim liberty to captives and recovery of sight to the blind, to let the oppressed go free, and to proclaim a year acceptable to the Lord.’

“Rolling up the scroll, he handed it back to the attendant and sat down, and the eyes of all in the synagogue looked intently at him. He said to them, ‘Today this Scripture passage is fulfilled in your hearing.’”

Divine Mercy is available to us every day in a variety of ways. Each day there are plenty of opportunities to receive the Sacraments, to make amends, to reach out and be a channel of Divine Mercy to someone else. Divine Mercy will never be exhausted.

“Eternal Father, I offer Thee the Most Precious Blood of Thy Divine Son, Jesus, in union with the Masses said throughout the world today, for all the Holy Souls in Purgatory, for sinners everywhere, for sinners in the universal church, those in my own home and within my family. Amen.”

You can’t help but to notice the similarities between that prayer and the prayers that we use as part of the Divine Mercy Chaplet.

Before St. Gertrude, tracing back to the fifth century, we have the origins of the closing prayers of the Divine Mercy Chaplet. During the reign of the Roman Emperor Theodosius II (408-450), Constantinople was shaken by a violent earthquake. During this horrible catastrophe, while the people, the emperor and the patriarch were all praying together for heavenly assistance, a child was suddenly lifted into midair. The people began to cry out “Kyrie eleison” (‘Lord, have mercy’). The child was then seen descending back to the earth, and in a loud voice he exhorted the people to pray: “Holy God, Holy Mighty God, Holy Immortal God” – the prayer that we use to end the Divine Mercy Chaplet. This hymn – which in our tradition we call the “Trisagion” – eventually found its way into the liturgies of the Western Church. Some believe that it is an extremely ancient prayer, perhaps tracing back to apostolic times. It may be that this prayer was originally an expansion of the angelic cry recorded in Isaiah 6:3 or the one found in Revelation 4:8, which is the inspiration for the Holy, Holy, Holy that we use at Mass.

One could make the argument that the message of Divine Mercy traces back to the preaching of Jesus himself. In Our Lord’s first public address in his home town of Nazareth, He proclaimed that He would inaugurate a new era of favor: a jubilee of mercy; a time acceptable to God the Father for the redemption of humanity; a time in which He would restore the world to its original beauty. We Christians believe that this era of favor and mercy was inaugurated on the cross on Good Friday and manifested with His resurrection on Easter Sunday. Eventually, Jesus will come again in glory and bring everything to completion. In the meantime, whenever we see a person freed from the clutches of sin, we see signs of the Kingdom to come – right here, right now. 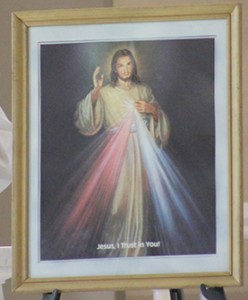 So, there might be some validity in saying that there really is no difference between today and any other day; no difference between this year and any other year. But for we happy few who gather year after year for these Divine Mercy devotions, we would say that there does seem to be something different about this year, something that makes it distinctive from other years. Certainly Pope Francis seems to think so. He sees something so different about this year that he proclaimed this year an extraordinary jubilee year of Divine Mercy.

In his official proclamation for this holy year, he gives his own reasons for why he sees this as a special year for Divine Mercy. He mentions St. Faustina as one of his inspirations. St. Faustina, this obscure little nun from Poland. While she was alive no one had ever heard of her; yet after her death she ended up changing the entire world.

It’s not the same situation, but could we not say something along the same lines about our own Mother Angelica, who just passed away last Sunday, on Easter Sunday? How this cloistered Poor Clare nun established a Catholic media empire that changed the world? In 1957, while still at Santa Clara Monastery in Canton Ohio, Mother Angelica was inspired to create a religious community which would appeal to African Americans in the southern states, and began to seek support. In 1961, in the midst of all the turbulence of the Civil Rights Movement that was occurring at that time in the south, her nuns bought a building and land, and in 1962 the order officially established Our Lady of the Angels Monastery located at that time in Irondale, Alabama. In 1972, she began taping a radio show for broadcast on Sunday mornings and she published her first book, and we could say the rest is history. In 1999, Mother Angelica visited Colombia where she claimed to have a vision which told her to build a temple in honor of the Child Jesus. Private donors contributed $48.6 million and she opened the Shrine of the Most Blessed Sacrament in Hanceville, Alabama, later the same year. Like I said, it’s not the same story as St. Faustina, but it is still a story of Divine Mercy at work, and it is one of the reasons why this year is different from all the other years that we have celebrated Divine Mercy.

In his official proclamation of the jubilee year, Pope Francis mentions St. Faustina, but that is not the primary reason for the establishment of this extraordinary jubilee year. The primary reason for this jubilee year in honor of Divine Mercy is that it marks the jubilee year – the 50th year – of the closing of Vatican II. It was on Dec. 8, 1965, that the last session of Vatican II occurred. The bishops then went home, and the work of trying to figure out how to implement all these great ideas began. And you can make the argument that we are still trying to implement all the grand ideas of the Vatican Council II.

For the sake of brevity, I’m going to oversimply what Pope Francis has to say. I think Pope Francis is trying to get us to rediscover the original enthusiasm which Vatican II engendered. Vatican II attempted to reach out to the modern world and say, “Yes, the Gospel still has something to offer despite how much the world has changed in the last 2,000 years. Divine Mercy is still available to those who want it.”

In the second chapter of the Book of Revelation, the Lord has these words to say to the Church in Ephesus: “I know your works, your labor, and your endurance. . . . Moreover, you have endurance and have suffered for my name. Yet I hold this against you: you have lost the love you had at first. . . .”

Perhaps what Pope Francis is sensing is this: the loss of our first love for spreading the Gospel. Perhaps, we as a Catholic culture have become so jaded and disillusioned by the infighting, by the corruption, by the scandals that we have seen in the church that the appeal of Divine Mercy has been lost on most people. It would explain why 24 percent of the millennials – those born after 1980 – don’t believe in anything or anyone anymore. This is a dramatic increase from previous generations. It explains why atheism along with Satanism and various forms of the occult are becoming more popular. This is something new, but we can’t call it progress. Unfortunately, this is one of the things that make this year, this time in history, distinctive and different from other times in history. If there was any time to rediscover the beauty of Divine Mercy it will be now.

On a positive note, in this jubilee year we will see the canonization of Mother Teresa of Calcutta. I find it rather fitting that she will be canonized during this year dedicated to Divine Mercy. She exemplifies being a channel of Divine Mercy to others, giving of herself to the poor, despite the personal struggles that she may have had. The canonization of Mother Teresa makes this year different from other years.

And so, I stand up here to proclaim that Divine Mercy has not been exhausted. And with that in mind, I’m now going to make a shameless plug for an event that I’m having at my parish. From June 23 to the 26, St. John’s in Rapids City is having 40 Hours Eucharistic Adoration in honor of Divine Mercy. We have invited Al Barbarino to come and lead us in song and praise, and give reflections on Divine Mercy. Perhaps some of you remember that Father Logan – of happy memory – had Al Barbarino come to Our Lady of Guadalupe Parish in Silvis to give a parish mission a few years ago. Well, we are inviting him back in the hopes that he will help us rediscover that first love – a love that perhaps some of us have misplaced – so we could go into world and proclaim “Divine Mercy is still available. It’s available to anyone who wants it.”