CHAMPAIGN — As he left home to enter the Salesian community, Father Joseph Santa-Bibiana told his parents that he was planning to stay unless they sent him home.

This year Father Santa is observing the 60th anniversary of his profession as a Salesian and the 50th anniversary of his ordination to the priesthood. He will celebrate with a Mass at 4 p.m. on Sunday, March 6, at Holy Cross Church, where he is the parochial vicar and director of the Salesian community. A reception will follow.

He is also planning a Mass of Thanksgiving in May at St. Philip Benizi Church in Belle Glade, Florida, where he served as pastor for many years before coming to Champaign in 2013.

The best gift, he said, is to pray for vocations “because some priests are getting old.”

That doesn’t seem like an apt description for the nearly 83-year-old priest. While he is considered semi-retired, parish work and his Salesian community keep Father Santa busy, as do Sunday Masses in Spanish, weddings and quinceañeras at St. Malachy in Rantoul.

“I just pray to God that he keeps me working and healthy until he wants me to go,” he said with a laugh.

LIKED WHAT HE SAW

Born in Valencia, Spain, on April 25, 1933, Father Santa got to know the Salesians through friends who attended one of the community’s schools three or four miles from his family’s home. While he attended a public school, he would ride his bicycle to go to Mass with his friends and liked what he saw. 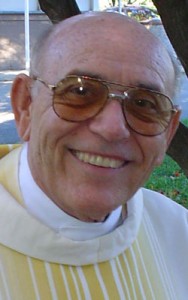 Father Santa-Bibiana will celebrate with a Mass at 4 p.m. on Sunday, March 6, at Holy Cross Church in Champaign, where he is parochial vicar and director of the Salesian community.

“They were always with us,” Father Santa said of the Salesian priests and brothers. He recalled the way they would tuck their habits into the pockets of their trousers when they played soccer with the youngsters and said he would later do the same thing.

St. John Bosco, the founder of the Salesian family, created these “oratories” to be places where children could have fun and make friends while they learned to be good citizens and good Christians, Father Santa said. “It is a place where you can come and feel at home.”

As was the custom, he started working when he was 14. He got a job running errands at a bank and started to learn accounting, which his parents considered good, stable employment with a future.

Little did they know that a seed for the priesthood, planted by his aunt and nurtured by a priest in confession, would bear fruit when the young man was 20.

“At that time, a vocation at 20 was a late vocation,” Father Santa said, explaining that many boys entered the seminary at 12 or even younger. “I had classmates that were seven years younger than I was.”

He was asked to teach a variety of subjects at the school, but after a year was sent to the minor seminary so he could attend to his own studies. After making his profession as a Salesian in Spain, he was sent to the United States for college in preparation to assist with his community’s work in Puerto Rico.

By the time Father Santa was ordained on March 6, 1956, in Salamanca, Spain, however, Puerto Rico was part of another Salesian province. His entire priestly life has been spent teaching or serving as a principal at Salesian schools in Florida, Massachusetts, New Jersey and New York, as financial administrator for his community and its schools, or in parish ministry — sometimes juggling several roles at once, as he does at Holy Cross in Champaign.

“I thank God that wherever I’ve been I’ve been happy,” he said. “I enjoy the people, especially the young people in schools.”

Apart from celebrating Mass, living out that Salesian charism of ministry to young people is what has brought him the greatest satisfaction.

“You give yourself to them,” Father Santa said. “The joy is knowing that through you God gets to them. You bring God alive through your dedication to them.”