WASHINGTON — If Father Stephen Willard had his way, every child would receive a Catholic school education, and ability to pay should not be an obstacle, according to the Diocese of Peoria’s Distinguished School Pastor for 2015-16.

“People are very generous in the parishes. We have tuition assistance funds. Sometimes it might be difficult, but I want them in our school and finances cannot be a reason,” said Father Willard, pastor of St. Patrick Parish in Washington and its school. “That’s my philosophy and it stems from St. Elizabeth Ann Seton. She made sure everyone had a Catholic education and she’d find the ways and means.”

His parents also instilled the value of a Catholic education in him, sometimes working more than one job to make certain he could attend St. Thomas the Apostle School in Peoria Heights and Academy of Our Lady/Spalding Institute in Peoria. In fact, he had only one choice for high school: Spalding or Bergan High School. 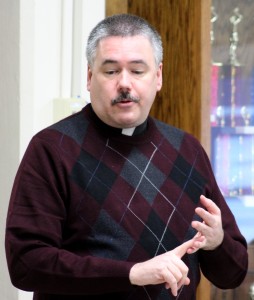 “Catholic education is truly a gift that I would like more people to encounter and choose,” says Father Willard.

“Thank God,” Father Willard said of his parents’ insistence, noting that his father went to Spalding and his mother attended Academy of Our Lady. “It was a family tradition, in a sense.”

He also credits his Catholic education for his vocation. His second grade teacher, Dominican Sister Mary Elizabeth O’Hara, told him he would be a priest one day, to which he replied, “No way!”

“Here I am today,” Father Willard said with a laugh. “She always encouraged me and my parents knew that, too.”

After high school he went to Saint Mary’s University of Minnesota, where he earned a bachelor’s degree in youth ministry, which included courses in education. His minor was in philosophy.

He completed his studies for the priesthood at Mount St. Mary Seminary in Emmitsburg, Maryland, and was ordained to the priesthood by Bishop John J. Myers on May 29, 1993. It was his time in Maryland that gave him the opportunity to walk in the footsteps of St. Elizabeth Ann Seton, who is regarded as the patron saint of Catholic education.

Father Willard, who is also pastor of St. Monica Parish in East Peoria, said his time in Catholic schools benefited him by “keeping the focus on our faith, the importance of living out our faith and putting it into action — teaching the morals and how to live our lives.”

He has worked to continue that tradition in all of his assignments, teaching at Holy Trinity in Bloomington and serving as chaplain at Central Catholic High School, where the students called him “Padre.” 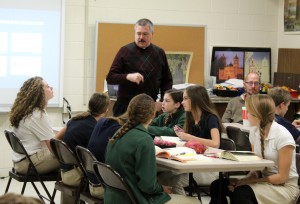 Father Willard works with the eighth-graders at St. Patrick School in Washington to prepare them for the sacrament of confirmation this April. (The Catholic Post/Jennifer Willems)

Father Willard also was involved at St. Thomas School in Philo and Holy Cross School in Champaign, and was the president of the pastors’ board for The High School of Saint Thomas More. He received that school’s highest honor, the Paideia Award, in 2010.

At St. Patrick School he is in the classroom each Monday morning to prepare the eighth-graders for confirmation.

Father Willard said just being present is vital for the pastor of any Catholic school, and he tries to be there for sporting events and school programs, as well as celebrating Mass, leading morning prayers over the intercom, and working with confirmation classes.

“He does have a natural connection with the kids. They love to hear him,” said principal Doreen Shipman. “He makes every person feel important. He sees the good in everyone, he really does.”

Dr. Sharon Weiss, superintendent of Catholic schools for the Diocese of Peoria, had Father Willard in her German class at Academy of Our Lady/Spalding Institute and said it’s impossible to express how proud she is of her former student and his total commitment to Catholic education.

She cited his “profound love for Christ, His church, and for Our Blessed Mother,” and said, “I cannot help but smile each time that I see him, and I will continue to pray daily for him and his priesthood.”

“We have a gift here,” Father Willard said simply. “Catholic education is truly a gift that I would like more people to encounter and choose.”