Tom Dermody retires from award-winning career at The Catholic Post 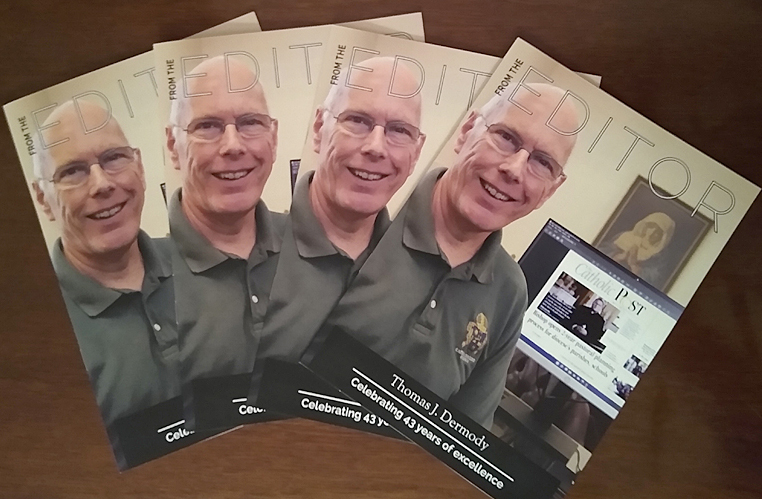 To celebrate Tom Dermody’s award-winning work at The Catholic Post, the staff put together a commemorative magazine with design by Shannon Reznik. (Provided photo)

There’s no doubt that Tom Dermody would rather be writing this story himself instead of having it written about him. After all, he’s been profiling people across the 26 counties of the Diocese of Peoria and telling stories of faith for 43 years.

While he dutifully answered questions about his long career at The Catholic Post and retirement on Sept. 30, there were only two words he really wanted to say.

“I wanted to use any gifts I have to give back to the Lord. The blessing was that it was a continuing education not only in things of the world, but in things of God.” — Tom Dermody

“That would go to my coworkers and the bishops and my colleagues in the curia (diocesan staff) and the people who let me into their life,” Tom said. He added his wife, Cindy, and daughter, Colleen, to the list.

“But mostly to the Lord,” he said softly, noting the Holy Spirit is really the editor of The Catholic Post.

The ability to recognize that and roll with what is happening is more than a skill. For Tom, it’s part of the creativity that has driven his career in the Catholic press.

“I think of myself as a creative person who writes,” he said. “That’s one of the many reasons why I’ve enjoyed this job is because in addition to the writing, there’s the photography and there’s the layout and other creative aspects that are in my wheelhouse as much as the writing.”

For him, journalism is a continuing education because in order to cover a story, you have to do your research. Only then will you know enough to write about it, according to Tom. 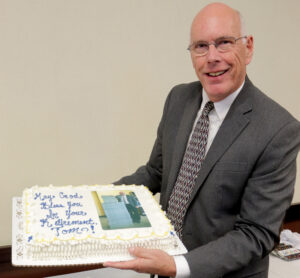 For his retirement luncheon on Sept. 28, Tom Dermody received a cake that shows him with 40 years of bound volumes of The Catholic Post. Three more would be needed if the photo were taken today.(Provided photo)

“So every story is an education and I love that aspect of journalism,” he said.

Working at a Catholic newspaper takes it all up a notch, however.

It was a blessing he actively sought when he wrote to Msgr. Robert G. Peters, then editor, as he prepared to graduate from Bradley University in 1979.

“I wanted to use any gifts I have to give back to the Lord,” Tom said. “The blessing was that it was a continuing education not only in things of the world, but in things of God.”

Those lessons, taught by “the best teachers in the Catholic faith,” included five bishops of the Diocese of Peoria, as well as St. John Paul II, whom he covered in Chicago, St. Louis and Rome, and St. Mother Teresa, who visited central Illinois in 1995. “It’s been a continuing education in the faith that is pure blessing,” he said.

Tom continued to soak up that education and was named news editor in 1981, assistant editor in 1983, editor in 1990, and editor-in-chief in 1995. In addition to Msgr. Peters, his mentors have included Albina Aspell, Father Richard Mullen and Father John Dietzen.

He has served on the Catholic News Service-Catholic Press Association Liaison Committee and received many CPA awards for his editorials, stories, photographs and general excellence of The Catholic Post.

While many of the journalists of his generation wanted to be like Bob Woodward and Carl Bernstein, the reporters who broke the news of the Watergate scandal, Tom wanted to focus on community journalism. He said that’s important in the Catholic press because “our mission is here and that’s what we do that nobody else does, which is cover the Diocese of Peoria.” 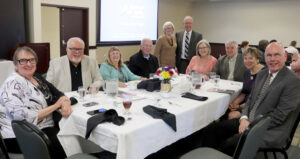 Tom Dermody is the youngest of Charles and Ruth Dermody’s seven children. Four of his siblings and their spouses were able to join him at a retirement luncheon on Sept. 28. They are (from left) Mary Ann and Dan Dermody; Beth and Bill Dermody; Dave and Mary Dermody and Mary and Steve Burch. Next to Tom (far right) is his wife of 37 years, Cindy. (The Catholic Post/Jennifer Willems)

Among the creative ways he did that was to start a section for youth, “The Catholic Student,” in 2007, in collaboration with staff writer Jared Olar. To engage people in works of charity, Tom started a feature called “Charity Chain,” that highlighted a need and then suggested ways to help. To honor the priests of the Diocese of Peoria and foster prayers for them upon their death, he started carrying the homilies from their funerals.

He even used his gifts of music and composition to accompany efforts such as the annual All Souls memorial video.

“It was a project I found incredibly meaningful as families shared the photos and stories of their recently deceased loved ones — and often their grief and faith, as well,” he said.

One of his compositions, “Peoria Pride,” also received an award from the City of Peoria during sesquicentennial celebrations and has been performed by the Peoria Symphony Orchestra and the Peoria Municipal Band.

“I love my work here, but when I’m in a studio and talented people do something I’ve written and bring it to life — it may be the most joyful I am,” Tom said. “It’s an amazing creative process and the spark always comes from the Holy Spirit because in songwriting there’s nothing and then there’s something and that has to be the work of the Holy Spirit.”

As he begins his retirement, Tom looks forward to cataloging and rerecording his compositions, which now number about 100. Going to daily Mass is also on his list, as is “shrinking my world a bit.”

“After looking after 26 counties and actually the world church, when you think about it, for so long, I’m ready to think neighborhood, think parish, think family — and play some tennis,” he said with a smile.

What about his legacy?

“I hope I’m remembered for loving Jesus and his church, especially the people of God in the Diocese of Peoria,” Tom said. “I hope people remember me for kindness and as a hard worker. And I hope people forgive the errors of fact or judgment I made along the way.”

EDITOR’S NOTE: For the time being, Tom Dermody will continue to serve as a consultant to The Catholic Post. Well wishes on his retirement may be sent to him at tdermody@cdop.org.