Spiritual hunger awakened by suspension of Masses can lead to growth, grace 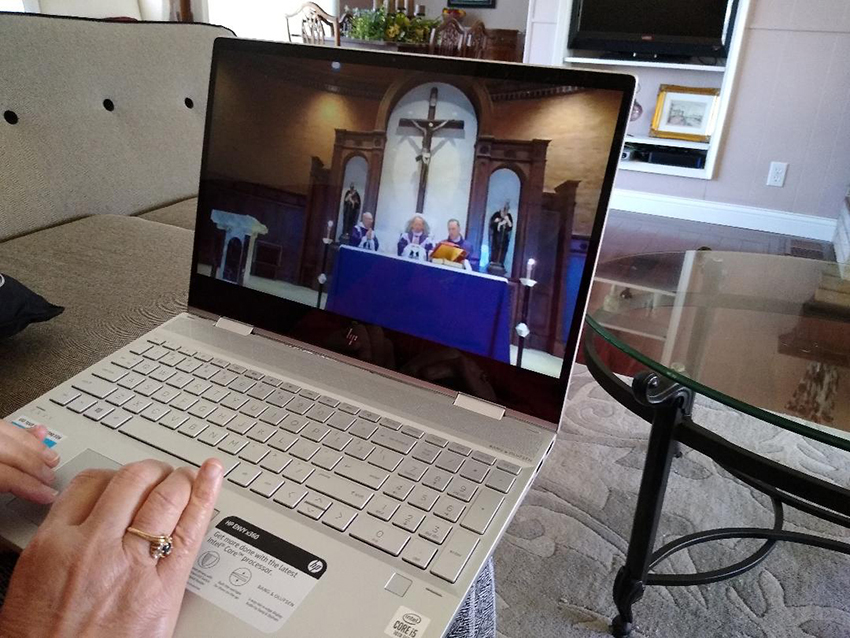 As the faithful adjust to the new reality of watching Masses that are being live streamed from their churches or rectory and convent chapels in an effort to prevent transmission of COVID-19, many are wondering what they should be doing as they sit in front of their computer, television or cellphone. Father Jacob Rose advises that they do what they would normally do in church.

“Mass is still the Mass, so it’s good to engage in the Mass,” Father Rose, parochial vicar of the parishes in the Galesburg Catholic Community, told The Catholic Post on March 17. “Stand and sit and kneel and give the responses and pray along.”

Father Rose will offer an explanatory Mass this Sunday, March 22, at 10 a.m. It can be viewed by visiting facebook.com/GBBCatholic.

He said if people find it distracting to see the little hearts and thumbs up icons, who has joined, or the comments on the Facebook Live feed, they can swipe down to turn those off. The idea is to block out as much as possible so they can focus on what is happening.

He plans to talk more about that this Sunday, March 22, during an explanatory Mass. He will live stream that at 10 a.m. at the Galesburg Catholic Facebook page. It will then be posted to the parish’s YouTube channel.

People seem to be responding positively and finding new ways of forming community, despite the inability to be present to each other personally, Father Rose said. For example, after the Masses he has streamed so far, he heard from people in five states and received photos of families sitting in front of the TV watching Mass and praying together.

One woman, whose husband has been homebound, was able to sit with him for the first time in years as they watched the Mass and prayed together, Father Rose said.

He added that a college friend whose daughter was ill posted a photo and received assurances of prayer and messages of support from other mothers who were tuned in.

“So the community life of what would happen in the vestibule is happening online,” he said.

Eduardo Chagas, a regular usher at the 9:30 a.m. Mass at St. Matthew in Champaign, found another way to keep that alive last Sunday. He greeted visitors to the live stream in the comments section and at the end of Mass he offered them a link to the parish bulletin.

During the Mass that was live streamed from the chapel of the rectory at St. Hyacinth Church in LaSalle last Saturday, Father Tom Otto acknowledged that this is a strange time in history and in our spiritual lives. 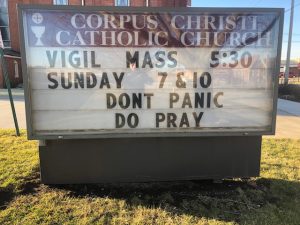 “Many people have spoken to me of their desire to be with the Lord, to receive the Lord,” he said in his homily. “It’s a time for us to remember the great gift of our faith and how close the Lord comes to us in the Eucharist. There are some gifts we may appreciate more when we don’t have them.”

Father Otto, parochial vicar of the LaSalle Catholic Community, said this is not a time to be afraid or panic, however.

“For most of us, the coronavirus would make us sick for a few days or maybe a week or two,” he said. The precautions being taken by the government, dioceses and churches are “all for the sake of love, concern and compassion of those who are most vulnerable.”

“Lent is meant to be a time when we change our lives, even our daily lives out of concern for the most vulnerable,” Father Otto said. “The inconveniences that we’re struggling with now, the suffering, the sacrifices we make, we can offer up. . . . That’s a powerful way of praying.”

Father Michael Andrejek, pastor of St. Joseph Parish in Pekin, invited people to see this as a time of prayer for the world, which is in the grips of the pandemic, for those who are developing the medicines to fight it and the medical professionals who are caring for the sick, for those who are infected or who have died, and for those who are suffering in any way.

“Perhaps we can see in this trying situation, this time when we’re literally locked out of church — the last place we feel we’d be locked out of — if we can start seeing this from a faith perspective, through that we might be able to find an avenue to grow in spiritual grace, to grow in faith,” he said.

The lack that we’re feeling now can either cause us to complain, doubt church leaders and think Mass isn’t that important, or it can lead us to turn away from sin and temptation and allow ourselves to be filled with a longing for God.

“Let us pray to the good Lord that we will always cherish his presence with us, every day of our lives, no matter where we’re at, but especially in his Blessed Sacrament,” Father Andrejek said.

At Immaculate Conception in Carthage, Father Thomas Szydlik and Father Tony Trosley of the Hancock County Catholic Parishes, made Jesus present in the only way available right now by leading a eucharistic procession from the church to the town square. Assisted by Deacon Daniel Moffitt, they prayed the Chaplet of Divine Mercy as they went, pausing for Benediction on all four sides.

Speaking from the St. John Paul II Catholic Newman Center at Illinois State University in Normal, Father Geoff Horton said, “Our time, like all time, is in the hands of God. Do not be afraid.”

The chaplain to the Newman community and parochial vicar of Holy Trinity and Historic St. Patrick parishes in Bloomington and St. Patrick, Wapella, Father Horton added during his homily that priests are heartbroken at not being able to celebrate public Masses.

“You are our families and our people,” he said. “The situation we have to endure is good for no one. It may be necessary, but it is very, very sad. I want you to know you are in our prayers.”

“We miss you a lot. We love you. We are praying for you. . . . We long for that day when to best fulfill our mission as parish priests we will celebrate Mass with you in this church.” — Msgr. Stanley Deptula

Msgr. Stanley Deptula, pastor of St. Matthew in Champaign and St. Boniface in Seymour, quoted St. Augustine, who said, “With you, we are brothers. For you, we were fathers.”

“All of your priests are going through the same things you are,” he said from St. Matthew Church on Sunday morning. “We worry about our loved ones at home, especially our older family members. We stock up on canned goods. We checked our toilet paper supply, which I think is pretty good. We’re with you in these days as your brothers.”

As fathers, Msgr. Deptula said, “We miss you a lot. We love you. We are praying for you. . . . We long for that day when to best fulfill our mission as parish priests we will celebrate Mass with you in this church.”

There were some glitches in the Facebook Live Masses from St. Matthew and he said they would be working to correct those, but “I don’t want to practice this so much that we get it right.”

Father Rose explained that live streamed Masses can help to unite the community in prayer, but are not a substitute for Mass.

“If anything, it makes us realize and appreciate what we have,” he said. “If we’re deprived of the regular motions, we can’t go through the motions anymore. We have to find different things and I think those different things can be real avenues of grace and growth for us.”

RELATED: Guest columnist Lindsey Weishar writes on the nearness of Jesus, others, in these historic times.