St. Francis ‘sunk his hooks into me,’ says troubador in return to Peoria parish 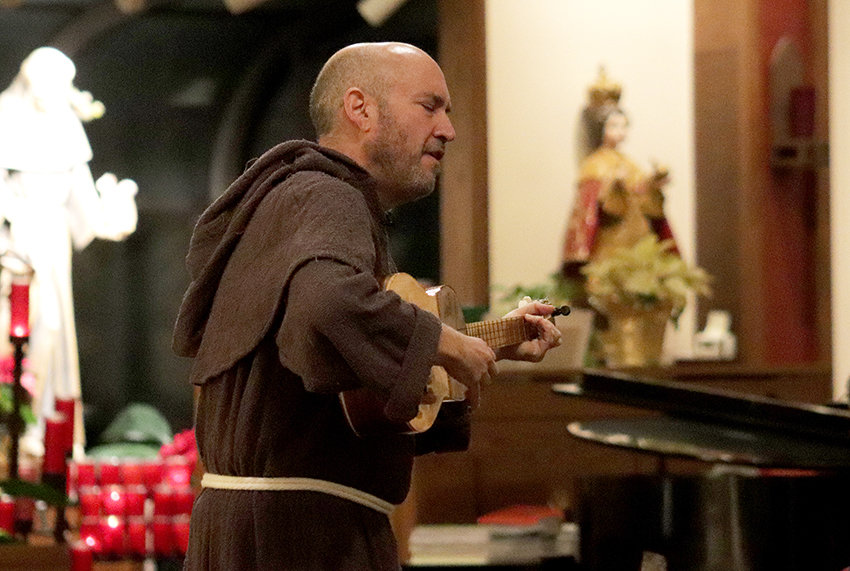 Dressed in a simple habit, James Twyman sings about peace and love as he channels St. Francis of Assisi during "Brother Sun, Sister Moon" at Holy Familiy Church in Peoria on Feb. 1. (The Catholic Post/Jennifer Willems)

On his way to New York City, James Twyman eagerly returned to Holy Family Church in Peoria, where his lifelong love of St. Francis of Assisi began — although he doesn’t use such gentle terms to describe it.

Pointing to the chair in the sanctuary where he sat as an altar boy, he told those gathered in front of him for a performance of “Brother Sun, Sister Moon” that it was there that Francis “sunk his hooks into me.” 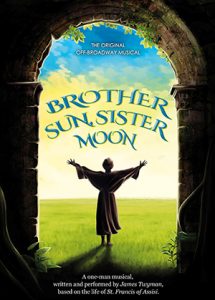 “I was holding a holy card with the image of St. Francis on it. I can’t explain what happened, but something took hold of me,” he said. “It’s like the holy card turned into light and I felt the presence of Francis in that moment.”

His life has never been the same.

Twyman was a postulant with the Conventual Franciscans for two years and then traveled the world as a “peace troubadour,” recording 18 albums and writing 16 books, all guided by his love for the little poor man from Assisi. His one-man musical, “Brother Sun, Sister Moon,” is the culmination of what he has learned along the way.

SANDALS OF A SAINT

Twyman moved to Peoria with his family in 1975, graduating from Holy Family School and attending Bergan High School for two years. He joyfully agreed to bring “Brother Sun, Sister Moon” to Holy Family at the invitation of Father Paul Joseph Langevin, OFM Conv., pastor, as part of the 40th anniversary of the Conventual Franciscans being at the parish.

“This is my home. This is where Francis first sunk his hooks into me,” he said with a chuckle. “Being able to return and share this story in that same church is just amazing and I’m so excited to do it.”

During the show, which will play off-Broadway at The Church in the Village from Feb. 20 to March 1, Twyman channels St. Francis to give an intimate portrait of the man who started as the son of a wealthy merchant and went on to found a large religious community 800 years ago. Dressed in a simple Franciscan habit, he moved up and down the main aisle of the church, touching a hand here or a shoulder there, kneeling at times before someone to look deeply into their eyes. 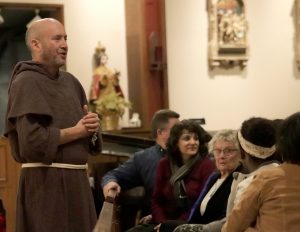 “This is my home. Being able to return and share this story in that same church is just amazing and I’m so excited to do it,” said James Twyman. He is pictured answering questions after his Feb. 1 performance of “Brother Sun, Sister Moon” at Holy Family Church in Peoria. (The Catholic Post/Jennifer Willems)

He discussed Francis’ pain of being disowned by his family, the joy of being joined by others who also wanted to live a life of simplicity and devotion to the Lord, and how hurt he felt to be replaced as the head of that community. Among the important moments Twyman shared was when Francis was able to connect with the Sultan of Egypt, who had vowed to kill him, over words of peace.

“Francis is one of those rare people who was and is able to look through the illusion of separation and see things as they really are, to see them as God sees them. That’s why he’s always been associated with nature and peacemaking. He was able to see the divine and God in everything,” he said.

Stepping into the sandals of St. Francis and seeing the world through his eyes means “looking through all of the drama and trauma and separation and trying to see the harmony that’s at the center of it all,” Twyman told The Post.

His tour of “Brother Sun, Sister Moon” began in Portland, Oregon, on Jan. 4. He is making the cross-country journey with a companion, Bill Free, and they are traveling as St. Francis would, with no money or credit cards, a simple change of clothes, and his Venezuelan cuatro, the only instrument he uses for the show.

Relying on the generosity of others for transportation, meals and lodging, he said he has been overwhelmed with how people have stepped forward to help. “Thus far we haven’t had to miss a meal or stick out our thumb once.”

People have also responded by donating blankets, hats, gloves and socks for the homeless people who will be invited to the show for free and served a soup supper by those who will pay for tickets to the off-Broadway performances.

“This is the first musical in New York where the primary audience is the homeless,” he said.

Twyman and Free are filming their experiences and plan to turn them into a series, “Becoming St. Francis,” for a streaming service. In the meantime, Twyman hopes St. Francis will touch lives through “Brother Sun, Sister Moon.”

“I hope they feel the fire that St. Francis felt and realize they can be transformed by that fire just as powerfully as he was,” he said. “Even though he lived 800 years ago, we have an equal responsibility to bring that light and fire to the world we live in because it’s so needed today. We live in a very polarized time and it’s up to us, through the power of love, to show that there is a path that unites us rather than divides us.”