LASALLE — Before Lent begins, here’s a story with some meat to it.

The LaSalle Catholic parishes have brought to market a three-meat spaghetti sauce, the sales of which help financially support the Queen of the Holy Rosary diocesan shrine to war veterans.

More than 1,500 jars of the sauce — called “Dalla Campanella,” Italian for “From the Bell Tower” and featuring Holy Rosary’s bell tower on the label — have sold in less than three months. The product continues to fly off shelves, whether at the church, the parish office, or the local Hy-Vee grocery store in Peru. (See below for how to purchase, including now online.)

“The sauce has been part of so many of the people’s memories,” said Father Paul Carlson, pastor of St. Patrick and St. Hyacinth parishes and rector of Holy Rosary Shrine. 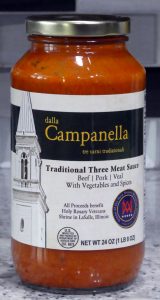 The name “Dalla Campanella” is Italian for “From the Bell Tower.” The sauce was cooked for years in the kitchen of Holy Rosary Church, located beneath its bell tower.

That’s because the traditional family recipe from northern Italy was perfected in the Illinois Valley by Msgr. Simon Bernardi, who guided Holy Rosary Parish for nearly four decades prior to his death in 1975. The thick, smooth sauce — featuring bits of beef, pork, and veal — was served at local spaghetti dinners and other functions for years.

“During Lent we would have 40 Hours devotions,” Lipka recalled, noting that dozens of priests from the region took part. “About halfway through, Monsignor would have a dinner for them in the basement of the church. Of course, he was making the sauce. You could smell the sauce coming out of the kitchen and I swear the chants got a little quicker.”

TO SUPPORT THE SHRINE

When Holy Rosary Church was elevated to a diocesan shrine for war veterans in 2007, Lipka began taking care of the church lawn. As he mowed one day, he pondered how the beautiful Bedford-stone church — the foundation of which was dug in 1954, the year Lipka was born — would be financially maintained with no parishioner support.

Then Lipka, whose father was a war veteran, remembered the spaghetti sauce.

“Msgr. Bernardi was free with the actual recipe, but it served like two to three hundred people,” Lipka recalled. “Every once in a while, he would make a big batch, put it in little bottles, and hand it out to people.”

Lipka shared the fundraising idea with Father Carlson after his appointment as pastor in 2016. About 15 months ago, Father Carlson gave the green light for Lipka and his wife, Pam, to explore how it might all work.

That process would take a year, with many practical and legal hurdles to overcome.

A HANDFUL OF THIS, A BUNCH OF THAT

An early dilemma was how to satisfactorily replicate a recipe that called for “a handful of salt” or “a bunch of carrots” into consistent measurements so that an outside company could prepare and bottle the sauce.

“The recipe said to take a bunch of carrots, cut them up, put them in a blender, and fill the blender with water,” said Pam Lipka. “A blender from 2019? Blenders have changed.” Pam and Bob went to the kitchen located below the bell tower at Holy Rosary Shrine and found an avocado green blender, a color popular in the 1970s.

“That had to be the one,” said Pam. They used that blender to determine the carrot and water content.

Dalla Campanella is produced and bottled by Dorina So Good, a company based in Union that specializes in sauces, salad dressings, and salsas. An early test batch received approval from two parishioners who used to help Msgr. Bernardi make the sauce.

“As soon as they came through the door the smell took them back,” said Bob Lipka. “And they said it tasted the same.”

Dalla Campanella has its own unique taste, but Pam — noting the pride many families have in their own recipes — emphasized “this is not meant to replace your favorite sauce or family recipe.”

The Lipkas and Father Carlson received an education in what it takes to bring a food product to market. Dalla Campanella bears the seal of the U.S. Department of Agriculture and has the familiar nutrition facts chart listing calories and daily values of sodium, carbohydrates, etc. per serving.

The label art was designed by Father Carlson. Following the familiar “Refrigerate after opening” comes a further instruction not found on most food products: “Say grace before meals.”

A RECIPE FOR SUCCESS

Prayer is part of Dalla Campanella’s recipe for success.

“There are a million questions that have to be answered when you do something like this,” said Bob Lipka. “And every time we were at a point that we needed to make a decision, we’d say ‘We need a little help on this,’” he added, with a finger point heavenward. “And the next thing we’d get a phone call or run into someone who would help things fall into place.”

Bob said the project also brings Msgr. Bernardi close to mind and heart. He described the late pastor as a “very generous, very devout” priest who had a strong devotion to Mary.

Father Carlson has similar leadership qualities, according to the Lipkas.

“We have to give him a lot of thanks,” said Pam. “This was a gamble. We didn’t know it would do this well. It could still be sitting on the shelves.”

That’s not what happened.

The recreated sauce made its debut at Trinity Catholic Academy’s annual fall spaghetti supper and was a hit. The Hy-Vee grocery store in Peru began stocking it after a sample table staffed by the Lipkas proved popular. The sauce has sold out twice. A third shipment of 20 cases arrived on Feb. 6, and three days later 11 of the cases had been sold.

“We’ve been cautious every step of the way, but it’s been very well supported,” said Father Carlson.

HOW TO ORDER, INCLUDING NOW ONLINE

Dalla Campanella may be purchased for $6 per jar at the parish office next to St. Patrick Church, 725 Fourth St., during regular office hours (10 a.m. to 5 p.m.) Tuesday through Thursday. Credit cards are accepted. It is also available on the “honor system” in the vestibule of the Holy Rosary Shrine, 529 Fourth Street, after Masses as well as from 8 a.m. to 8 p.m. on Tuesday, Wednesday, and Thursday during eucharistic adoration.

The sauce is also stocked by the Hy-Vee grocery store, 1651 Midtown Road in Peru, and will soon also be available at the Hy-Vee in Bloomington.

For those outside the region, orders are now being taken online at shrinesauce.com. To cover the expense of shipping the heavy jars, the cost is $30 for two jars. The price includes tax and shipping.

“By expanding sales to other towns, it affords more areas of the diocese the opportunity to support the shrine,” said Bob Lipka.