CHICAGO — It was a tough year for respect life advocates in Illinois, still mourning the passage of the Reproductive Health Act that made abortion a fundamental right in the state. That didn’t stop March for Life Chicago, however.

Organizers moved this year’s event to a bigger venue. 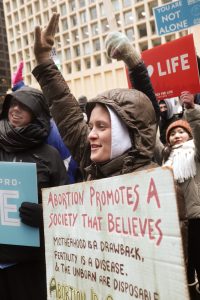 According to their estimates, 9,000 people from 13 states accepted the invitation to fill Daley Plaza on Jan. 11. Adding their voices and determination to see abortion end across Illinois and the nation were 70 people on a pilgrimage sponsored by the Diocese of Peoria, who braved cold, sleet, snow and rain to be there.

“Every march for life involves sacrifice,” said Sister Ana Pia Cordua, SCTJM, director of the diocesan Office of Evangelization and Faith Formation. “Every year it is the same thing. We know that we are in a spiritual battle.”

As the two buses made their way to Chicago, she reminded pilgrims that people who seek an abortion are not evil people, but scared, confused, desperate and in need of prayer.

Sister Ana Pia also told the college students, who made up the majority of the diocesan pilgrims, that more than 80 percent of abortions take place during the college years.

“So there could possibly be people you know that are carrying this big wound in their hearts. How beautiful it is if they could feel loved and embraced by us, by our faith,” she said. “All is not lost.”

The theme for the 2020 March for Life Chicago was the same as the National March for Life that will be held on Jan. 24 — “Life Empowers: Pro-Life is Pro-Woman.”

Dawn Fitzpatrick, president of March for Life Chicago, noted that the theme dovetails with the 100th anniversary of women’s right to vote in the United States and said the “original feminists” would have thought of abortion as “an oppression of women, inconceivable and a crying evil.”

The suffragettes knew they were different from men, but their equality came from the unique gifts women have, Fitzpatrick said.

“We want to show women that they don’t need to destroy unborn children to succeed in life,” she told those gathered before her. 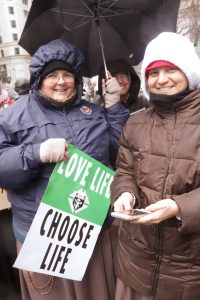 Alex Lehan, a junior majoring in mathematics at the University of Illinois and a student leader for weDignify, said her nightmare came true when Illinois legislators stripped the unborn of all dignity by passing the Reproductive Health Act. It was signed into law by Gov. J.B. Pritzker on June 12, 2019.

She said she dreamed of a world that empowers women by showing them they can fulfill their dreams and raise children. “I know we have the ability to make my dream a reality.”

March for Life Chicago marked the first march of 2020 and Lehan encouraged the pro-life advocates to be “loud for life” so that their voices would be heard throughout the nation.

“We will continue to march until we see the dignity of women and the unborn upheld,” she said.

Cardinal Blase Cupich of Chicago welcomed the presence of the many young people in Daley Plaza and said, “You give us so much more warmth and hope for the future.”

He reminded his listeners that if we say we are pro-life we must also be pro-woman, providing the resources they need to bring a child into the world. That includes proper health care and all the social amenities they need to be mothers.

It’s necessary because every child is a gift that calls forth a sense of generosity, he said.

Related story: Pontiac parish hosts its own March for Life on Jan. 11

“It makes us better human beings when we make room for children at the table of life,” Cardinal Cupich said.

Other speakers included an abortion survivor, whose twin died during the procedure, and a client of a crisis pregnancy center.

Rather than circle Chicago’s Loop, this year’s march took participants to Michigan Avenue. It ended at the Congress Plaza Hotel where a convention was held, and Mass was celebrated. The day ended with a banquet and swing dancing.

What couldn’t end was their commitment to life, according to Eric Scheidler, executive director of the Pro-Life Action League. 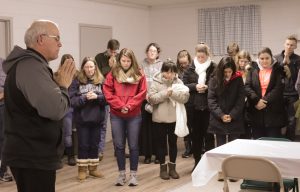 Father David Sabel, pastor, offers a prayer before the meal provided by St. Joseph Parish in Chenoa for the pilgrims from the Diocese of Peoria as they returned from March for Life Chicago. At the Mass prior to dinner he thanked them for their witness. (The Catholic Post/Jennifer Willems)

“We give him the little bit that we have — a three-hour bus trip to Chicago for a two-hour walk in the rain — and see all that he will continue to pour out on us if we just give him that little ‘yes’ to do things that are uncomfortable for us or scary,” said Jacob Hopper of the St. John Paul II Catholic Newman Center, who helped to carry a banner that said “Life Plays in Peoria.”

“Just know that he will always provide for us,” Hopper said.

“I thank all of you for your faith and your witness,” Johnny Berlinger of the St. Joseph Catholic Newman Center told his traveling companions. “A lot of times we think our voices are not heard, but it’s moments like this that we see how strong we are when we stand together.”

Sister Michelle Fernandez, SCTJM, executive director of Catholic Charities of the Diocese of Peoria, said she had seen a sign that said, “Our salvation came from an unexpected pregnancy.”

What brought her to tears was when she made eye contact with an abortion proponent and saw that his eyes were filled with tears, too.

“Maybe our witness, our prayers will be the healing they need,” she said.

Before the two buses parted ways — one heading back to Bloomington/Normal and one to Peoria — the pilgrims stopped for a Mass celebrated by Father David Sabel at St. Joseph Church in Chenoa. He praised them for living out their baptismal promises by doing what Christ would do.

The parish also provided a chicken dinner for the hungry travelers.

EDITOR’S NOTE: More photos from March for Life Chicago have been posted to The Catholic Post’s site on Facebook.