PONTIAC — They were separated by 100 miles and a mix of winter precipitation, but a renewed March for Life through downtown Pontiac last Saturday prayerfully marked the same cause as March for Life Chicago, the largest pro-life event in the Midwest that also took place Jan. 11. (See related story on diocesan pilgrims in Chicago here.) 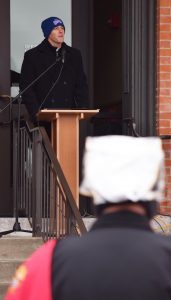 Father Adam Cesarek, administrator of St. Mary Parish in Pontiac, addresses the crowd from the steps of the Livingston County Courthouse. (The Catholic Post/Tom Dermody)

“We may not look like Chicago, but it feels like Chicago standing up here,” said Sam Alsdorf, a coordinator of the Ignite Youth Ministry of St. Mary Parish, in welcoming more than 40 march participants to the steps of the Livingston County Courthouse for a brief rally to pray for an end to abortion.

Alsdorf explained that St. Mary hosted a similar march about a decade ago. The parish youth ministry decided to resurrect it this year and hopes to make it an annual event.

“We thank you for the gift of life you have given to us, that in all things we might do everything for your glory,” said Father Cesarek. “Most especially we pray for all the souls in the wombs of mothers, that you be with them and guide them and help them come to life.”

Led by Mike Vallow, a member of the Pontiac Knights of Columbus dressed in Fourth Degree regalia, they then walked four blocks down Main Street to the courthouse, passing St. Mary Church and School along the way.

The rally at the courthouse included talks by:

After the rally, participants were invited to the St. Mary parish hall for refreshments. Among them was Sarah Brummitt, executive director of the Hope Pregnancy Center in Pontiac, a pro-life outreach located across the street from the south steps of the courthouse.

“I’m thankful there are people who support life and have joined with the pregnancy center to help our clients see their value just as Jesus does,” Brummitt told The Catholic Post. She said Hope Pregnancy Center — which offers pregnancy testing and referral services confidentially and free of charge — plans to open a second location in the newly remodeled OSF Center for Health-Streator.

EDITOR’S NOTE: More photos from this event have been posted on The Catholic Post’s Facebook site.