Not after the sophomore molecular and cellular biology major at the University of Illinois spent five days in Italy with a contingent from St. John’s Catholic Newman Center and attended the Oct. 13 canonization Mass for five new saints, including St. John Henry Newman. The British theologian, poet and cardinal is a patron of Catholic campus ministry, including a student residence hall here.

“Being from Newman Hall, ‘Newman’ is often thrown around as just the name of a building,” said Burkhardt, who was part of a small pilgrimage group led by Father Robert Lampitt, Newman Center head chaplain.

“However, after this week, I have a much deeper understanding of the power behind that name,” said Burkhardt. “Seeing Cardinal Newman’s picture hanging high at St. Peter’s is an image I’ll remember for the rest of my life.”

Pilgrims interviewed by The Catholic Post after their return late last week all reported a new understanding of the universal nature of the Catholic Church after their experiences in Rome and Assisi.

“Any liturgy at St. Peter’s displays the vast variety of the Roman Catholic Church,” said Father Lampitt, who celebrated Mass near the tomb of St. Peter for his group.

“Walking the streets of Rome and visiting 1,600-year-old churches helps one to realize quite easily that we are part of something much, much bigger than ourselves,” he continued. ”To be surrounded by so many from other countries and cultures is a vivid reminder that God’s love knows no limits.” 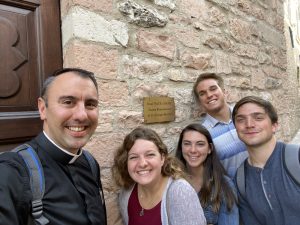 Father Lampitt is pictured with the Newman pilgrims during a side trip to Assisi. (Provided photo)

Burkhardt said the “global experience” of the canonization Mass was especially powerful.

“We were standing right next to the Communion line and we were blessed to see so many people with different races, ethnicities, and languages all in one line to receive Jesus,” he said.

During the trip James Kabbes — who posted daily updates and photos on a blog — said he saw “thousands of people adoring Jesus . . . and no two looked the same.” The canonization Mass, he noted, was celebrated in multiple languages.

Yet, it was all familiar, said Nicole Nussel, a fifth year geology major who — like fellow pilgrim Aleesha Roessler — is a graduate of The High School of Saint Thomas More in Champaign.

“For some reason, watching the pope celebrate Mass and seeing that it was the exact same Mass I participate in at the parishes here shocked me,” said Nussel. “It just stands to show that we are all one church, and evil will not prevail against it.”

Father Lampitt said he hopes to put together a display of items from the canonization at St. John’s Catholic Newman Center, but would like to see the experience shared in a more personal way.

“My hope is that the students will talk and talk and talk about it for years to come,” said Father Lampitt, who was able to share with the students his own past experiences in Rome. “Every one of their future trips to Rome will be compared to this one,” he said, adding with a chuckle, “and I doubt any will live up to it.”