SPRINGFIELD — Tears fill Shirley Buckner’s eyes when she talks about abortion, and her heart breaks at the thought of what happens to the unborn during the procedure that will stop theirs.

“It’s so horrible. It’s horrible,” said Buckner, a member of St. Thomas Aquinas Parish in Mount Pulaski. “Such a beautiful life that’s snuffed out and in a brutal way. They don’t have a chance. They don’t have anybody but us to pray for them.” 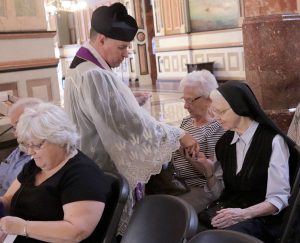 Father Edward Ohm offers a blessed Rosary of the Unborn to Sister M. Elaine Haertjens, OSF, of West Peoria, who attended the Rally Against Abortion at the State Capitol. (The Catholic Post/Jennifer Willems)

Nearly 30 people joined her in prayer and witness in the rotunda of the State Capitol on Sept. 4 for a Rally Against Abortion. Father Edward Ohm, who serves as parochial vicar for the four parishes of the Logan County Catholic Community, organized the event as a private citizen with the intention to pray for all government leaders.

He also led prayers in reparation for “sins committed against God, through the intercession of Our Lady of Sorrows.”

The rally, which lasted about 45 minutes, included a blessing of the State Capitol with holy water sprinkled in all directions from the rotunda floor. Father Ohm concluded by consecrating the building to the Immaculate Heart of Mary.

The Illinois General Assembly was not in session but that didn’t deter Father Ohm. He was determined to move forward whether there was a roomful of people or just a few.

“I’m happy to do my part to further pro-life here in the State of Illinois,” he told The Catholic Post. “Who’s to say? After we leave today there could be some spiritual activity going around these great walls that we may never be privy to.”

Father Ohm said after he retired from chaplaincy with the U.S. Army last November and returned to parish ministry in central Illinois, he grew concerned about the direction in which the state was going on several issues. While he touched on high taxation and the LGBT curriculum that is being mandated in public schools, his main focus was abortion.

Despite a rally that opposed establishing the Reproductive Health Act and repealing the Parental Notice of Abortion Act that shut down the State Capitol on March 20, as well as Diocesan Life Advocacy Days and a press conference by the Catholic bishops of Illinois, the Reproductive Health Act passed just before the spring legislative session ended.

Known as Senate Bill 25, the Reproductive Health Act was signed into law on June 12 by Gov. J.B. Pritzker. It makes abortion “a fundamental right” in Illinois. 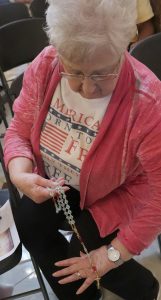 Pat Schwerer of Peoria shows the Rosary of the Unborn that those who attended the Rally Against Abortion received. Each of the beads is in the shape of a teardrop with an unborn baby inside. (The Catholic Post/Jennifer Willems)

Father Ohm told The Post, “When you’re in a situation like this you think, ‘Lord, what am I supposed to do? How can I do something? How can I make my mark for something like this right now?’”

His “mark” was the Rally Against Abortion.

Checking with the Office for Pro-Life Activities and Special Projects for the Diocese of Springfield, which sent out an email blast for him, Father Ohm called the Office of the Secretary of State to get the gathering approved and arrange for seating. He also contacted Illinois Right to Life to help get the word out.

In addition, he notified Zachary Wichmann, director of government relations at the Catholic Conference of Illinois, and Cecilia Soñé, director of Respect Life Ministry for the Diocese of Peoria.

Saying that lawmakers have “way too much power” over who is going to live and who is going to die, Father Ohm told rally participants, “We’re going to do our part to kind of go in and probe these people spiritually and let them know this is what we think is best for the citizens of Illinois.”

Seeking the conversion of hearts and minds, he encouraged them to “pray, pray, pray like you’ve never prayed before.” One of the most powerful prayers is the rosary, Father Ohm said before blessing Rosaries of the Unborn and distributing them to all who attended.

He reminded them that 60,943,033 abortions have taken place since Jan. 22, 1973, when the Supreme Court handed down the decisions in Roe v Wade and Doe v Bolton that legalized abortion. But those who have a hand in advancing that agenda don’t stop to think about what happens next, he said.

“We could have had somebody who could have had a cure for cancer or promoting technology that’s going to make our lives much better,” he said. “Someone who was sacrificed could have made a difference.”

“IMPORTANT TO SHOW UP”

Father Ohm urged them to continue to form their consciences and help those around them to form theirs so they could vote accordingly. He added that it’s important to make their mark, even if it seems small.

“It’s important to show up and do what we can and show them there are numbers of us that don’t believe in the laws that are getting passed. It’s lives lost. Many hundreds . . . will be lost because of these laws that have been or are going to be passed.” — Karen Guth

“It will all fit together on that collage of life and all of a sudden we’ll realize our small part meant something to further the cause a little more,” he said.

Father Ohm told them not to get discouraged or despair.

“Whatever we do today is going to have rippling effects in the days to come,” he said.

For Karen Guth, a longtime participant in 40 Days for Life and member of St. Vincent de Paul Parish in Peoria, it doesn’t matter how big or small a pro-life gathering is.

“It’s important to show up and do what we can and show them there are numbers of us that don’t believe in the laws that are getting passed,” she told The Post. “It’s lives lost. Many hundreds . . . will be lost because of these laws that have been or are going to be passed.”

While they were there, some of the rally participants took advantage of the opportunity to visit the office of Gov. Pritzker. One of them was Pat Schwerer of St. Vincent de Paul in Peoria and an organizer for a monthly Holy Hour for the Rights of the Unborn Child at Immaculate Conception Convent in West Peoria.

The governor wasn’t there, so her group just left word “that pro-life was represented here today and that we’re part of the state.”