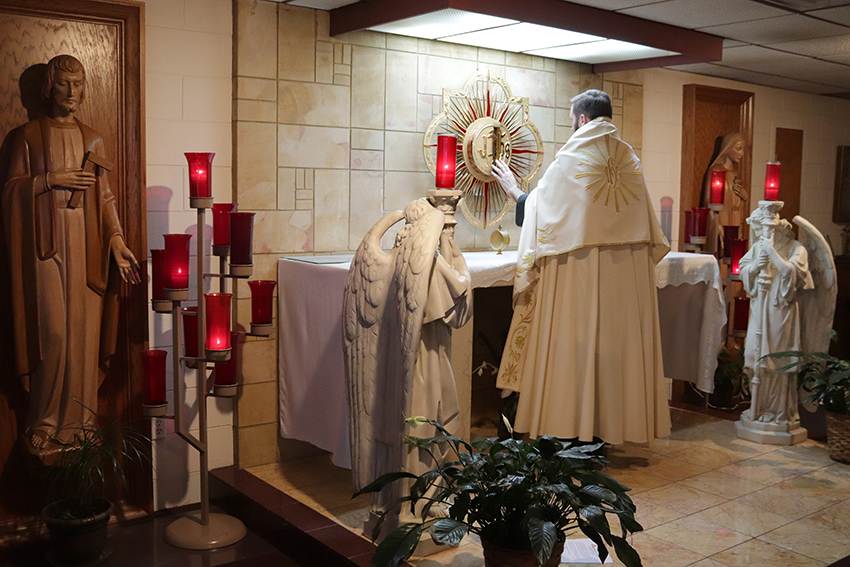 After leading prayers and removing the Blessed Sacrament, Father Giles Gilbert, OFM Conv., closes the doors over the monstrance for the last time in the Perpetual Adoration Chapel at Holy Family in Peoria on Aug. 1. After nearly 21 years, a new program of eucharistic adoration began Aug. 2. (The Catholic Post/Jennifer Willems)

More than 20 years of perpetual eucharistic adoration came to an end at Holy Family Parish in Peoria on Aug. 1 as a quiet procession, led by Father Giles Gilbert, OFM Conv., accompanied Jesus from the adoration chapel in the parish center to the church.

On Friday, Aug. 2, parishioners and friends started spending time with him in a new way that ensures that he will never be alone, according to Father Paul Joseph Langevin, OFM Conv., pastor. 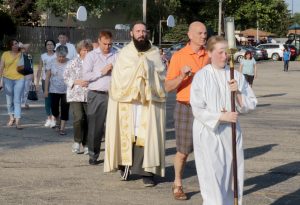 Assisted by sacristan Scott Diestelkamp, Father Giles Gilbert, OFM Conv., carries the Blessed Sacrament in procession from the Perpetual Adoration Chapel in the parish center of Holy Family, Peoria, to the church on Aug. 1. After reposing the Eucharist in the tabernacle, those present sang “Holy God, We Praise Thy Name.” (The Catholic Post/Jennifer Willems)

The Eucharist will now be exposed from 8 a.m. to 5 p.m. in the church on the First Friday of every month and each Wednesday. The sacrament of reconciliation will be available from 4:30 to 5 p.m. on those days, and Mass will follow at 5:30 p.m.

Everyone is welcome to sign up for a regular hour of prayer or to stop by the church at 3720 N. Sterling Ave. to spend time in quiet prayer before the Lord.

“It will be nice to have the church open, where Jesus is exposed and people can come throughout the day,” Father Paul Joseph told The Catholic Post.

The first day of the new program coincides with the Feast of the Portiuncula, which is always observed on Aug. 2. Those who come that day and meet a few requirements will be able to obtain the Portiuncula Indulgence or the Pardon of Assisi, which dates back to St. Francis of Assisi.

Father Paul Joseph explained that the Portiuncula or Little Portion was a chapel that was gifted to St. Francis by the Benedictines after he repaired it.

“The sanctuary was needing some love and care,” he said. “A beautiful basilica has been built around it now.”

While praying in the chapel, St. Francis had a vision of Jesus and the Blessed Mother surrounded by angels. The Lord asked the poor man of Assisi what he wanted.

“He humbly said he wanted that all who would come with contrition in their hearts to that chapel would be mercifully forgiven of their sins because he had been forgiven of his sins,” Father Paul Joseph said. “He wanted others to know the mercy of the Lord, the love of the Lord.”

St. Francis took his request to Pope Honorius III, who was “blown away” by it, since the church did not grant indulgences like that except to the Crusaders and those who assisted them, Father Paul Joseph said. 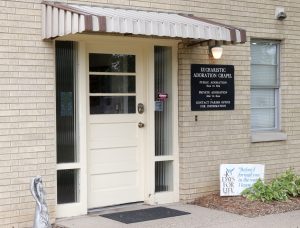 Adorers have passed through this entrance to the perpetual adoration chapel at Holy Family Parish in Peoria for more than 20 years. (The Catholic Post/Jennifer Willems)

The pope did grant the request with the stipulation that pilgrims had to come to that church, called St. Mary of the Angels. Eventually it was extended to any Franciscan church, then to any church or basilica on Aug. 2.

To obtain the indulgence, a person must go to confession, attend Mass and receive Holy Communion, recite the Apostles Creed and the Our Father, and pray for the intentions of the Holy Father. Father Paul Joseph said the church offers penitents up to eight days before to complete the requirements.

It offers the release not only from the guilt of sins, but also the temporal effect of sins, for any deceased soul or for the individual asking for the complete pardon, he said. It can’t be done for someone else, unless that person is unable to do it for themselves, such as the poor souls in purgatory or a deceased loved one or friend.

To aid people on Aug. 2, the sacrament of reconciliation will be available from 4 to 5 p.m., Father Paul Joseph said.

Perpetual adoration began at Holy Family thanks to the fervor of Brother Martin Schmitz, OFM Conv., and a group of people devoted to the Blessed Mother and eucharistic adoration, according to Father Paul Joseph.

With much planning and care, the chapel was created in the parish center and perpetual adoration began in October 1998. Part of the planning was to ensure that two adorers would be in the chapel for every hour and that two backups would be available to cover them if something should happen — requiring 96 people per day.

But that “backbone” disintegrated over the years, Father Paul Joseph said, and even though attempts were made to renew interest in perpetual adoration, the chapel was often covered by one adorer per hour. At times, if the next person did not come and the adorer had to leave, the doors of the monstrance were closed.

“It’s about the proper adoration of Jesus, when he is reverently exposed,” he said. “There are rituals and prayers that are part of the exposition and reposition, so the opening and closing of the doors over the monstrance tabernacle is not proper.”

The decision was made to come up with another program of adoration that would benefit the parish and this part of the diocese, Father Paul Joseph said, noting that St. Philomena Parish still has perpetual adoration and would likely appreciate the support.

While the chapel at Holy Family has closed, it will still be used for the parish’s Catechesis of the Good Shepherd.

“It will be a perfect chapel, a beautiful chapel, a sacred space for our kids to be able to go and continue to be formed in the faith with that curriculum,” Father Paul Joseph said. “Many people take comfort in knowing it’s not going to get torn apart and what was for 20 years is not going to be dismantled. It’s going to stay exactly the same.”

For more information or to sign up for adoration, visit church.peoriaholyfamily.com and click on the link for Bulletins.