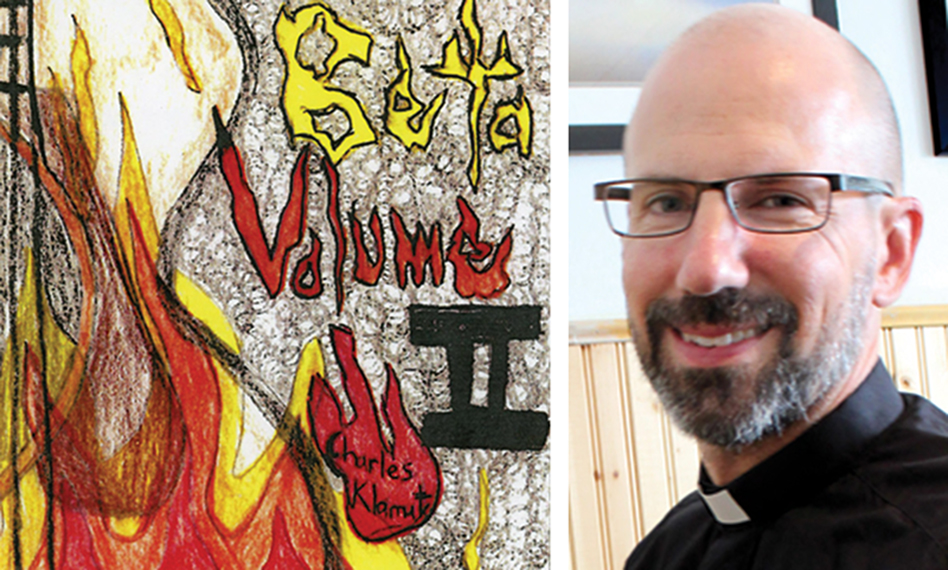 MILAN — Inspirations for songwriting can hit Father Charles Klamut unexpectedly, even during a stop at a coffee shop while out of town to celebrate the wedding of a former student.

Twenty-four hours after that visit, the pastor of St. Ambrose in Milan and St. Patrick in Andalusia had written “Barista,” one of seven songs on “Beta, Volume II,” his fourth solo CD released June 21. (Click here to sample some of the songs or to purchase an MP3 album.)

“If I’ve ever written a hit, that’s it,” said Father Klamut of “Barista,” in which he shares his observations about the woman who took his order and the people at the tables around him. He called it “the Piano Man of this generation,” referencing the 1973 Billy Joel classic that described the people at a piano bar.

But while “Barista” may resonate with a wide audience, “Beta, Volume 2” is not about hits. Like “Beta, Volume 1” released last summer, the project aims to share stories of those who are somehow “second” in life, either through poverty, social exclusion, or other factors.

That might mean musically telling the story of an alienated student eyeing the “Cool Kids Table” in the school lunchroom, or focusing on those who do the menial jobs that help others live comfortable lifestyles in the thought-provoking “If I Didn’t.”

While “Beta, Volume I” was keyboard-driven, Volume 2 returns to Father Klamut’s guitar roots. He mixes in lively drumbeats and makes his harmonica debut to create a folk rock sound, though a variety of styles are found on its tracks. All vocals — including harmonies expertly added by Courtney Stice, a member of the Andalusia parish — were recorded in the sacristy of St. Patrick Church.

The CD also features instrumental work by “talented friends” including Christian Ramirez and Lucas Fritch on drums, and Mike Frank on bass.

“It’s a labor of love,” said Father Klamut of his music. “These songs are inside of me. They’ve been asking me to let them out for the world. I try my best to do that, and if someone likes them along the way, that’s great.”

Father Klamut and Stice will sing a few selections from “Beta, Volume 2” as well as traditional hymns Monday night in Silvis as part of the “Summer of Inspiration” concert series at Our Lady of Guadalupe Church. (See story below.)

“Beta, Volume 2” is available on a variety of download sites including Amazon, Spotify, Apple Music, iTunes and YouTube.  Some CDs have also been created and will be available at the Silvis concert.

SILVIS — Father Charles Klamut will perform at Our Lady of Guadalupe Church in Silvis on Monday, June 24, as part of that parish’s “Summer of Inspiration” series.

Father Klamut is pastor of St. Ambrose, Milan, and St. Patrick, Andalusia. He is also a musician and songwriter who has just released a new CD. (See story above.)

Joining him for the 7 p.m. concert will be vocalist Courtney Stice, a member of St. Patrick, Andalusia.

The “Summer of Inspiration” series was envisioned by Father Peter Zorjan, pastor, to provide not only musical entertainment but inspirational testimony.

“I was honored he would ask me to come,” said Father Klamut of the invitation from Father Zorjan.

The series began on June 3 with a concert by Tony Melendez, who was born without arms but learned to play guitar with his feet. Future featured artists include Kitty Cleveland, a singer/songwriter and inspirational speaker from New Orleans, and Julie Carrick, a “catechetical artist” who shares the teachings of the Catholic faith through music and personal witness.

There is no cost to attend the concerts, but a free will offering will be received. Our Lady of Guadalupe Church is located at 800 17th St.