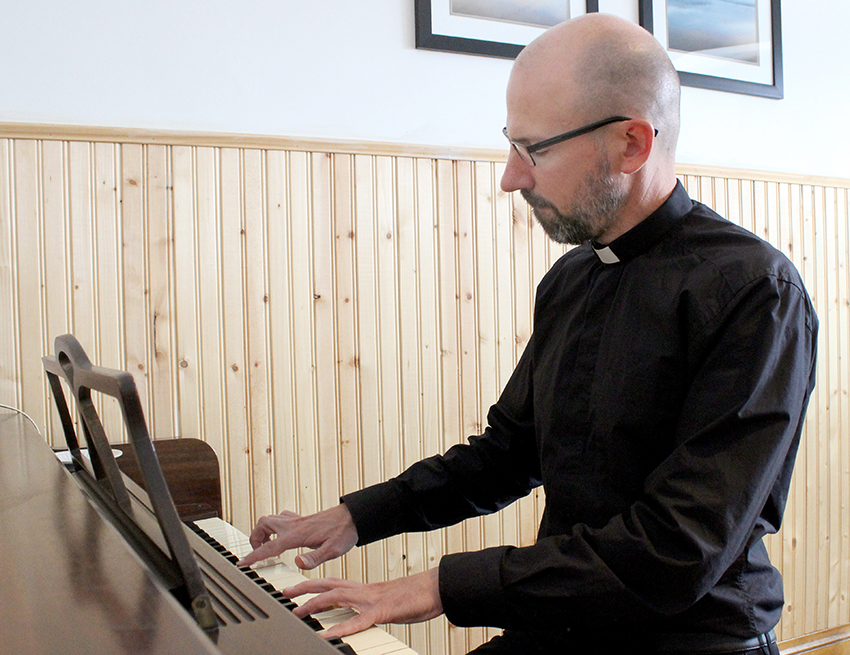 MILAN — A lifelong guitar player, Father Charles Klamut recently took up piano. His newly released music collection, “Beta, Volume I,” not only shares that fresh musical chapter but demonstrates that the priest’s songwriting artistry continues to evolve as well.

“I aim for thoughtful lyrics and songs that hang out around the edges of experience,” writes Father Klamut — pastor of St. Ambrose, Milan, and St. Patrick, Andalusia — in brief artist’s notes that accompany “Beta.” It is his third solo CD, following “Rarefied Air,” released in 2001, and “Space Traveler” in 2010. 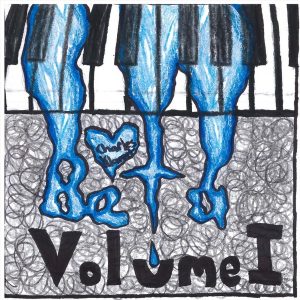 The cover art for “Beta, Volume I,” the new music CD by Father Charles Klamut.

Pope Francis often challenges Christians to leave comfort zones and go to those on the margins. The seven songs of “Beta” take listeners to the peripheries — of society, of doubt, and ultimately of hope, if we “accept some responsibility” for our neighbors, as Jesus commands and Father Klamut echoes in the conscience-pricking “Have We Wept.”

“Can our ears hear? Do our eyes see? Does any of it matter to you and me?” he sings in a chorus that follows verses containing litanies of downtrodden individuals, from refugees to homeless veterans to abandoned spouses. “Have We Wept” is a duet that features the vocal talents of Courtney Stice, 20, a member of the Andalusia parish who also provides harmonies on other songs.

“She did an amazing job,” said Father Klamut of Stice’s vocal interpretations, particularly on “Have We Wept.”

Even the collection’s title, “Beta” — the second letter of the Greek alphabet — acknowledges those who are poor and “second” in this world.

“As Christians, we worship Jesus, the literal Alpha and Omega, who incredibly identified with the Betas of this world, becoming Beta himself,” Father Klamut told The Catholic Post.

Father Klamut admits this is not “feel-good” music, though his scat in “Hey Tom Bombadil” — a tribute to a jolly supporting character in J. R. R. Tolkien’s “The Lord of the Rings” — will bring a smile. 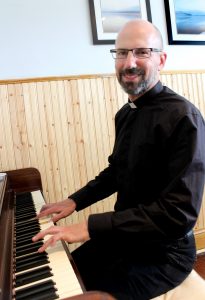 “I aim for thoughtful lyrics and songs that hang out around the edges of experience,” says Father Klamut. (The Catholic Post/Jennifer Willems)

“As a priest, I am the voice of hope and faith for people every day,” says Father Klamut. “Songs are a safe place for me to voice my own questions, difficulties and hopes.”

There are plenty of all found throughout “Beta,” and perhaps especially in the second selection, titled “The Long Defeat.” In it, Father Klamut acknowledges and even sympathizes with friends who have left the church. But he maintains that “faithful tears can still taste sweeter than a scoffer’s empty laugh.”

“The Long Defeat” is followed by the prayerful “Show Me.” Featuring only piano accompaniment, Father Klamut sings lyrics which could serve as a devotion to start any believer’s day.

Opening nearly every selection is a piano introduction, recorded on the Steinway grand concert piano at St. Patrick Church of Merna in Bloomington. Father Klamut added vocals, guitar, and other instrumentation and effects in the living room of St. Patrick Rectory in Andalusia.

The CD’s cover art is by Gabi Test, a former student at Peoria Notre Dame, where Father Klamut served as chaplain or teacher from 2002 to 2008.

Father Klamut says that several songs for a Volume 2 of “Beta” have already been written. That CD, he says, will return to his guitar roots.

Meanwhile, “Beta: Volume I” may be sampled and purchased online at sites including iTunes, Amazon, and CD Baby. Download cost is $6.99.