CANTON – Surrounded by the love of God and the Catholic community of central Illinois, two men at the Illinois River Correctional Center were received into the Catholic Church on April 24. 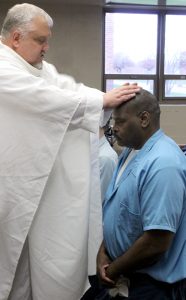 Father Daniel Ebker, pastor of St. Mary in Canton, prays over Willie Davis before confirming him on April 24 during a Mass at the Illinois River Correctional Center in Canton. (The Catholic Post/Jennifer Willems)

Representatives from the Cursillo community included Carrie Harp and Curt Theyse of St. Mary in Canton; Sheila Kaurin of Blessed Sacrament in Morton, who serves as volunteer coordinator between Chaplain Kenneth Bloyd and Cursillo; and Steve Gomer of St. Vincent de Paul, and Terri LaHood of Holy Family, both in Peoria.

Offering prayerful support and pastoral concern was Bishop Daniel R. Jenky, CSC, who gave permission for the men to be baptized and confirmed.

Davis and Catalano said they could feel the love.

“I always wanted to be part of the ‘family’ but I was afraid because of the life I was living,” said Davis. “It was time to do something different.”

He had been coming to Mass at the correctional center for about two years and started preparing for the Easter sacraments seven months ago. He chose Maximilian for his confirmation name because St. Maximilian Kolbe is the patron saint of prisoners and the lost.

“I’ve been lost a long time,” Davis said, adding, “I want to be able to walk in faith.”

Catalano, who was raised in a Catholic family, said “life got in the way” when he was learning about the sacraments. Feeling a need to be closer to God, he decided the time was finally right.

“I want to go to heaven,” he told The Catholic Post. “It was time to turn my life over to God, to Jesus.”

His favorite saint has always been St. Jude, so that’s the name he chose for confirmation.

“He gives hope to those who need hope,” Catalano said. “Not everybody’s a lost cause.”

WE MATTER TO GOD

“Sometimes I think it’s easy for us to forget that God’s love is boundless,” said Father Ebker after Mass ended.

“Sometimes I think it’s easy for us to forget that God’s love is boundless.” — Father Daniel Ebker

In his homily, he reminded his listeners that if we let God do what he does, he can bring good out of the worst things – even something like the fire at Notre Dame Cathedral in Paris. Among the relics that were rescued was the crown of thorns said to have been worn by Jesus.

But the first thing that matters to God is us, Father Ebker said, so we can last for eternity.

Because Jesus has conquered sin and death, we aren’t going to live and die, he explained. “God says, ‘You’re better than that.’”

“Some people can’t grasp how much God loves us,” he said.

Helping to make that apparent are the volunteers who come into the Illinois River Correctional Center with Father Ebker for Mass or Communion services once a week, bringing a variety of video series to foster the faith and explain Catholic customs, tradition and doctrine. There have also been Cursillo weekends, with the most recent one taking place in March.

One thing the volunteers always stress when working with the men is that people outside the walls of the correctional center are praying for them, according to Harp, who is there every week. 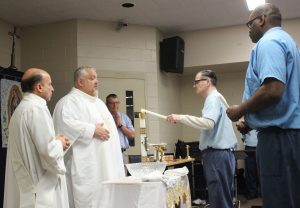 Reed Catalano lights a candle after he was baptized by Father Daniel Ebker at the Illinois River Correctional Center in Canton on April 24. Looking on is Willie Davis (right), who was also baptized. (The Catholic Post/Jennifer Willems)

“It just keeps driving home how much God loves them,” she said.

“Very special” is how Kaurin described the baptisms and confirmations, and sharing the Eucharist with Catalano and Davis for the first time.

“Since this is happening at Easter, it makes it a very blessed occasion to have two new members of the Catholic Church,” she said.

“I think what it shows us is there are many opportunities out there and we, whether clergy or lay people, sometimes we need to go outside of what’s comfortable and our norm and look for those opportunities,” Deacon LaHood told The Post.

“What it really spoke to me is that even God can get into prison when he wants to, as strange as that sounds,” he said. “Even God works inside an institution where humanity struggles. I think that’s what really showed the last couple of months as we’ve been working.”