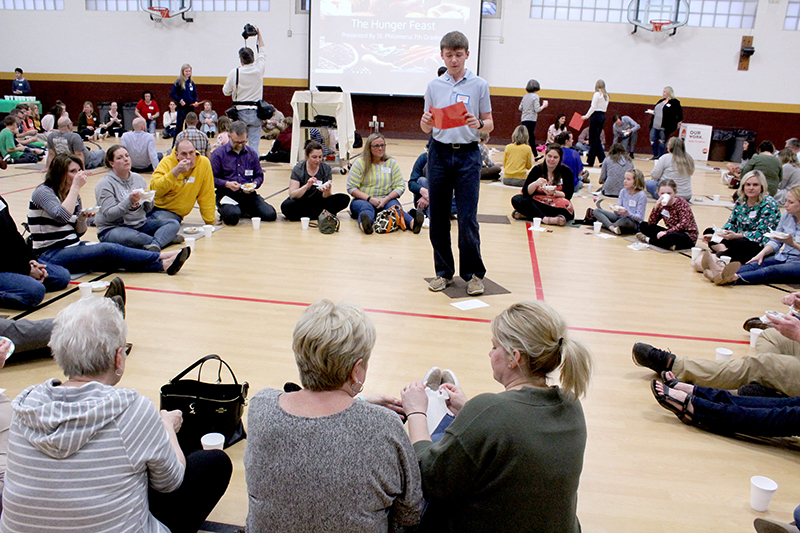 Matthew Baker leads a discussion with those eating rice and beans as members of the group representing underdeveloped nations at the St. Philomena School Hunger Feast in Peoria. (The Catholic Post/Jennifer Willems)

When the seventh-graders at St. Philomena School in Peoria recently invited people to join them for dinner, they had three options available: rice and beans, a sack lunch, or a three-course meal of pulled pork, mashed potatoes, green beans, salad and chocolate cake.

The guests didn’t get to choose which dinner they would receive, however. Their dinner tickets were distributed at random as they checked in.

The Hunger Feast had begun. 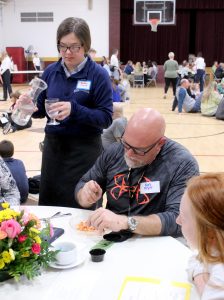 As a member of a developed nation, Kurt Meyer is served a three-course meal at the St. Philomena Hunger Feast. Refilling his water glass is seventh-grader Evelyn Hayes. (The Catholic Post/Jennifer Willems)

A service project hosted by the school’s 41 seventh-graders, the purpose of the event was to raise awareness about world hunger. The meals were designed to simulate what a person in an underdeveloped, developing, or developed nation might eat, according to Grace Best and Ella Coulter, who served as co-chairs.

“We want people to realize tonight that we are very fortunate to be living where we are and to have the food that we have,” Coulter told The Catholic Post. “There are many in poverty and through this event we want people to be truly moved so they can do something about it.”

The largest group at the Hunger Feast were in the underdeveloped category, Best said. That amounted to about 85 people or 60 percent of all the participants.

They were invited to come forward to receive a bowl of rice and beans and a bottle of water, and then take a place on the gym floor. Carpet squares were provided for them to sit on.

Thirty percent — about 38 people — were in the developing category. Seated at four long tables, they ate a sack lunch and were given a bottle of water to drink.

Those representing developed nations — 10 percent of the participants or about 12 people — were seated at tables with tablecloths, nice silverware and plates, and flowers. They had their meal served to them and were given plenty to drink, with “waiters” refilling their glasses over and over again.

Part of the dinner conversation in each group included questions about how they were feeling, what they typically spend on food, and what action steps they might be able to take to combat hunger. When the “feast” was over, they were asked to share what they learned.

One person, who was seated on the floor, said that while he couldn’t see what the other meals looked like, he knew he was still hungry and wanted more beans. 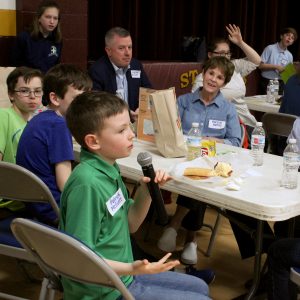 “We don’t think about the people who don’t get what we get,” said St. Philomena student Patrick McGuire, who sat at a table with the developing group at the Hunger Feast. (The Catholic Post/Jennifer Willems)

“I might have thought that I wanted more food, but then I looked at the others who had a small portion,” said another student, Patrick McGuire, who sat at the same table. “You can go home and get more food, but for some people this is what they get for a day. We don’t think about the people who don’t get what we get.”

Linda Hoerr, who was placed in the group that had a three-course meal, said it disturbed her to see the disparity between what she had and what the others were eating.

“I asked if we could have plates and split our food and give it to the people who were on the floor,” she said.

One person who got a “red ticket” that put her on the floor with a bowl of rice and beans, said, “Tonight it was a random luck of the draw. We don’t realize that we won the lottery. We didn’t do anything to get this. . . . We should be grateful every day to have what we have.”

“WE FEED THEM ALL”

Claire Crone, director of Sophia’s Kitchen at St. Joseph Parish in downtown Peoria, talked about what life is like for people who don’t have enough to eat due to poverty, homelessness and underemployment.

“No one chooses to be poor. Not one of my clients woke up this morning and said, ‘Gosh, I hope I can’t buy food today,’” she told them, noting that 200 volunteers serve about 350 nutritionally rich sack lunches each day, Monday through Friday. 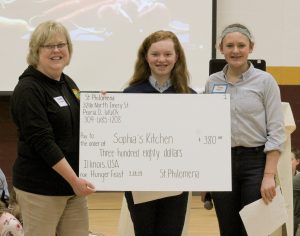 “Who should we feed? Who should we help? Sophia’s Kitchen feeds them all. No questions asked,” Crone said. “We can’t fix all of their problems, but we can see that no one goes hungry.”

She thanked the St. Philomena students and families for being among the people who help with their time and talent, and before Crone left they shared their treasure with her, too. Best and Coulter presented a check for $380 to her on behalf of the Hunger Feast Committee.

The students and their guests also heard from Bridget McGuire, a parent mentor for the event and a volunteer at Sophia’s Kitchen.

Work on the Hunger Feast started last August with the guidance of teachers Sally Kincaid and Amy Murphy. Before the students presented the event for the parish community, they had a mini Hunger Feast to see what it would be like.

“I think they realize how much our world is suffering with poverty and hunger. They want to help,” Kincaid said.

The students will continue to volunteer at Sophia’s Kitchen every Tuesday, and have planned a visit to the Midwest Food Bank. They will also put together “blessing bags” with healthy snacks and toiletries for people in need.

And the Hunger Feast, which was held for the first time two years ago, will become an annual event, Kincaid said.