Hard work on the court and generous service off it are part of the team chemistry that resulted in a state championship for the seventh grade boys’ basketball team of St. Vincent de Paul School in Peoria on Feb. 7.

The Vikings used a 12-4 third quarter spurt to overcome a one-point halftime deficit and held on for a 51-41 victory over Decatur Robinson in the Illinois Elementary School Association Class 7-2A title game at Limestone High School in Bartonville. 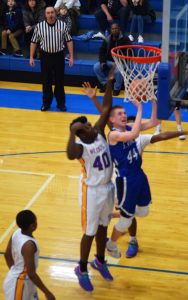 Cooper Koch muscles in for two of his game-high 24 points in St. Vincent de Paul’s 7-2A state title win over Decatur Robertson. (The Catholic Post/Tom Dermody)

The Class 7-1A third place game on Thursday night in East Peoria featured two Catholic schools of the Diocese of Peoria, with Holy Family of Oglesby defeating St. Patrick of Washington by a score of 45-31.

CHAMPIONS ON, OFF COURT

“It’s a great group. They love being together,” said J.R. Koch, head coach, of the St. Vincent de Paul squad whose state title capped a season of 28 wins and just one loss. The Decatur Robinson team entered the title game with a record of 21-1, with their only loss coming to St. Vincent de Paul in the first game of the season.

The Vikings were led in scoring by center Cooper Koch’s 24 points, while Eoin Dillon added 16.

“They work hard,” said Coach Koch of his team, praising their teamwork and effort. “We put them through a lot. In tough games like this, it really shows.”

But the team is also close off the court, and during the season performed a number of community projects for those in need, according to Patsy Santen, principal.

“The coaches instilled a lot of good virtues in them,” she told The Catholic Post. As the latest example she pointed out how, immediately after the championship game, the team members applauded the throng of fans to thank them for their support.

Coach Koch credited the parents for their involvement in service projects such as delivering food or organizing fundraisers.

Among the fans looking on were members of the Peoria Notre Dame High School basketball team, which includes several players from St. Vincent’s last boys’ basketball state championship teams — in 2015 as seventh graders and again in 2016 as eighth graders.

Santen said the school would mark the state title the following morning during the weekly all-school Mass and with a team celebratory walk through the school’s hallways with the trophy.

Asked how coaching compares to playing — Coach Koch was a star at the University of Iowa and played professional basketball for six years – he said “while playing you can take out the stress with the banging and the bumping.” But as a coach “you feel every rebound miss and every shot miss.”

“But it’s awfully fun when you’re coaching a great group of kids,” he was quick to add — a group that includes his son, Cooper, who he says “is always in the gym.”

EDITOR’S NOTE: More photos from the title game are found on The Catholic Post’s site on Facebook.

Cheerleaders and school and parish officials join in for a group photo after Peoria St. Vincent de Paul captured the IESA Class 7-2A state championship. (The Catholic Post/Tom Dermody)