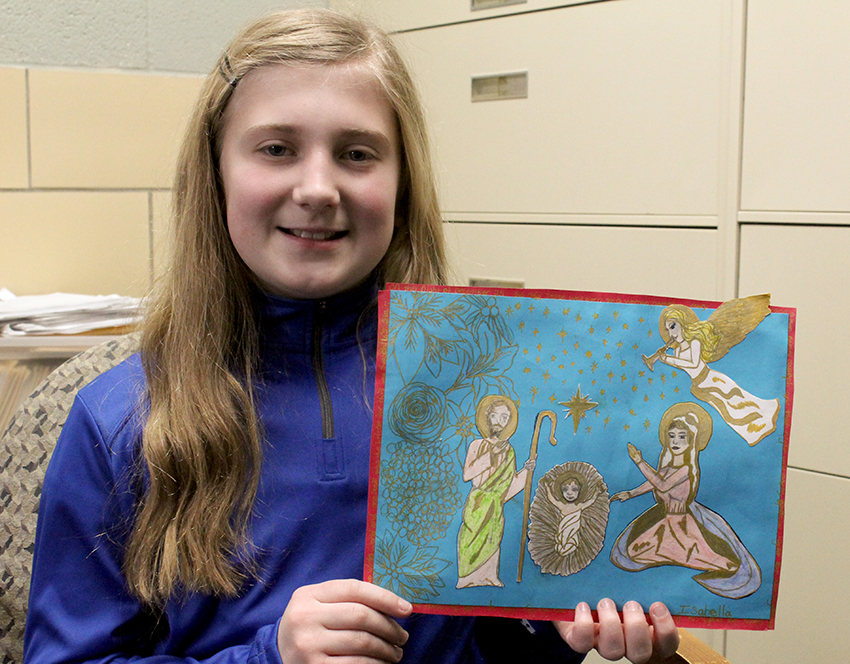 Isabella Schmillen of St. Mark School in Peoria holds her winning artwork that was chosen for the cover of the Christmas cards sent out by Bishop Daniel R. Jenky, CSC. On the back she wrote her own sentiment: "Never forget to always love God." (The Catholic Post/Jennifer Willems)

She may only be a fifth-grader at St. Mark School in Peoria, but Isabella Schmillen is no novice when it comes to art.

Anyone who received a Christmas card from Bishop Daniel R. Jenky, CSC, has seen her drawing of the Nativity, which put Jesus, Mary and Joseph under a sky filled with gold stars. And during Catholic Schools Week, volunteers and community members received cards of thanks with her rendering of St. Mark Church on the cover.

While winning the bishop’s Christmas card contest was an unexpected honor, Isabella’s artistic abilities come as no surprise to her mother.

“She’s been drawing since she’s been small,” said Carrie Schmillen, who joined the St. Mark School staff as a reading enrichment teacher last fall. “When we home-schooled she would draw for hours in the afternoon.”

“My friends all said, ‘Congratulations.’ My grandma said, ‘I’m so happy!’ My teacher said, ‘We’ve got a celebrity in the class.’” — Isabella Schmillen

There may be something in her DNA, too.

Her father, Jeremiah Schmillen, is an artist who painted the mural on the building that houses Broken Tree, a pizza restaurant at the corner of Main and Sheridan in Peoria. The Schmillens own the business and the building.

“I don’t really paint. It’s more drawing,” Isabella said. “I like to draw superheroes. I like to imagine them and then draw them.”

They’re all different, but they’re all girls, she told The Catholic Post.

“We’ve always made sure she’s gotten to see a lot of art,” Carrie said. “We’ve taken her to Chicago. We go to the library. And being a teacher I have tons and tons of books, so she’s studied different styles.”

That came in handy when the Office of Catholic Schools for the Diocese of Peoria announced the contest to design the cover of Bishop Jenky’s Christmas card. Carrie said Isabella knew what she wanted to do right away.

The young artist asked for blue paper, red paper and a gold pen, and her father took her to a craft store to buy what she needed.

“I was kind of debating about doing Mary or a Nativity,” Isabella said. “I decided to do a Nativity with lots of flowers instead of putting them in a barn.”

She drew the figures of the Holy Family and the main star first, using the gold pen. Then she cut them out and pasted them on the blue paper. She finished the card by pasting strips of red paper around the edges and writing the Christmas story on them in gold ink.

While the evangelists did a nice job with the Gospel accounts of Jesus’ birth, Isabella’s imagery of how the angels sang and danced and rejoiced ramps up the joy to another level.

On the back of the artwork she wrote (in gold pen, of course): “One thing you should never forget. Never forget to always love God.”

The announcement that her design had been selected came during a school assembly.

“I was really excited and a little bit surprised,” Isabella said. “My friends all said, ‘Congratulations.’ My grandma said, ‘I’m so happy!’ My teacher said, ‘We’ve got a celebrity in the class.’”

“I feel like this school and the atmosphere has drawn out her artistic ability,” she said.

Carrie taught first, second and third grades in Peoria Public Schools for 10 years before taking six years off when her youngest child, Eli, was born. She home-schooled Isabella, Eli, who is in kindergarten, and Madeleine, who is in fourth grade, until last fall when they became the fifth generation of the Schmillen family to attend St. Mark School.

She was worried about the girls coming in at a later age, but realizes now she didn’t have to.

“It was immediate friends. As soon as they sat down the kids welcomed them into the group and it was very comforting,” Carrie said.

As for Isabella, art isn’t the only thing that lights her up. She has always been drawn to the Bible and has already read all the books on saints that director of religious education Terry Mischler has.

She also likes to learn about animals, biology and DNA, and hasn’t ruled out being a science teacher. Or an art teacher. Or a nun who runs an orphanage.