BLOOMINGTON — Over the weekend they were praising Jesus with 700,000 new friends and Pope Francis on a sweltering field in Panama. On Tuesday the seven students and two teachers were back at Central Catholic High School here bracing for record cold, but warmed by the memories of their experiences at World Youth Day. 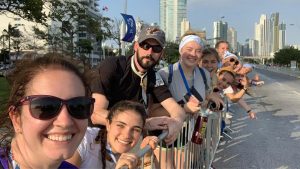 With the Panama City skyline in the background, pilgrims from Central Catholic High School in Bloomington await the arrival of Pope Francis to World Youth Day. Among those pictured are, from left, Lauren Booth, one of two Spanish teachers that organized the trip; guide Sara Molina, who is from Colombia; Father Timothy Hepner, diocesan vocations director of recruitment; and Kylie Cox, a Central Catholic senior. (Provided photo)

“The students have had some good conversations on social media already,” said Lauren Booth, one of two Spanish teachers at Central Catholic who organized a pilgrimage to the global Catholic event hosted by the Central American nation Jan. 22-27.

And the first thing that Meghan Sheehan, a senior, wanted to tell her friends and family about was the massive, holy “slumber party” at St. John Paul II Field — otherwise known as the overnight World Youth Day prayer vigil prior to Saturday’s closing Mass with Pope Francis.

“All night we met groups from different countries,” Sheehan told The Catholic Post in a telephone interview on Jan. 29 from the office at Central Catholic. “It was neat to learn about other people’s conversions and how God is working in their lives.”

Booth explained that she and Elizabeth O’Brien — also a Spanish teacher at Central Catholic — decided they wanted to go to World Youth Day in Panama as soon as the location was announced by Pope Francis at the close of the 2016 gathering in Krakow, Poland.

They emphasized that their pilgrimage was through a private company and not associated with Central Catholic, but those that accepted their invitations were the seven Central Catholic students and one alumnus now in college. They were joined by Father Timothy Hepner, diocesan vocations director of recruitment.

While in Panama City, the Bloomington pilgrims stayed at a hostel in the city center. Before World Youth Day events began on Jan. 22, they had already made friends from all over the world and toured the region, including the Panama Canal.

Sheehan, who has taken Spanish all four years at Central Catholic and began studying it in kindergarten at Epiphany School in Normal, had many opportunities to put her training to good use. 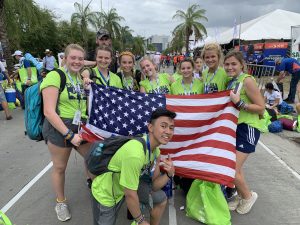 “It was a great opportunity to grow in my faith and see a different part of the world that doesn’t always have the blessings we have in our lives,” said Sheehan.

The early days of the event included catechetical sessions in the pilgrims’ native languages. One of the largest events for U.S. pilgrims was the Fiat Festival sponsored by the Fellowship of Catholic University Students and other groups Jan. 23 at the Figali Convention Center.

When Pope Francis arrived on Thursday, “it was awesome,” said Sheehan. And “crazy loud,” as the throng cheered and waved flags from their countries.

The culminating moment came Saturday when the Bloomington pilgrims put on backpacks and hiked five miles to the overnight vigil site.

There, Pope Francis led them in adoration of the Blessed Sacrament.

“It was really powerful,” said Booth. “We were sitting in that field and they asked us to be silent — more than a half-million people and it was dead silent as the power of Jesus overtook the crowd.”

Booth said the youths are considering how best to share their experiences with fellow students.