DANVILLE — A funeral Mass will be offered at 10 a.m. on Saturday, Jan. 26, at Holy Family Church here for Canon John Joseph Flattery, a Danville native who served as a chaplain with the U.S. Air Force for nearly three decades and later was pastor of Holy Family Parish as well as St. Matthew Parish in Champaign.

He received the title of canon — or assistant to the archbishop — “in perpetuum” in 1971 while serving at the Cathedral of St. John the Apostle and Evangelist in Izmir, Turkey,

Born June 4, 1930, in Danville to John and Hildegarde (Faulstich) Flattery, he attended St. Joseph Grade School and received a scholarship to attend high school and seminary training at the Pontifical College Josephinum in Worthington, Ohio. He received his bachelor’s degree in philosophy and humanities there and later received a teaching certificate from Illinois State University in Normal.

Canon Flattery was ordained by Cardinal Amleto Cicognani, then apostolic delegate to the United States, on June 4, 1955.

From 1956 to 1960, he taught history, social science, Latin, and Greek at Marquette High School in Ottawa. 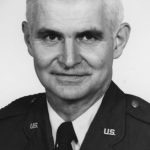 Canon Flattery retired from the U.S. Air Force in 1988 with the rank of colonel.

Responding to a call for more Catholic chaplains for military service, and with the permission of then-Bishop John B. Franz, he entered the U.S. Air Force chaplaincy in 1960. Because of his education, he entered with the rank of captain and retired 28 years later as a colonel, having earned both the Air Force’s Meritorious Service Medal and its Commendation Medal.

He would serve at bases in Morocco, Taiwan, Turkey, the Philippines, as well as in Texas, Arizona, Georgia, South Carolina and at Chanute Air Force Base in Rantoul.

He was a member of the USAF chaplain board and served in the Office of the Command Chaplain — twice as chief of professional division and as assistant command chaplain.

Along the way he earned a master’s degree in educational psychology at the University of Illinois and another in divinity from the Pontifical College Josephinum. In 1975, he received a doctorate in education from Boston University.

He published two editions of the “Catholic Curriculum and Resource Guide” for use by chaplains in their field as well as other materials used by those entering the Air Force to help them reflect on values and goals in life.

After his retirement from the Air Force in 1988, he briefly served on the faculty of St. Leo College in Florida before returning to the Diocese of Peoria in 1989 to serve as pastor of Holy Family Parish in his hometown of Danville. He was vicar of the Danville Vicariate from 1990 to 1992, the year he became pastor St. Matthew Parish in Champaign. He would serve there for two years, and was granted senior status in 1995.

In his retirement years, Canon Flattery assisted area pastors on a regular basis and was active in the Danville community. 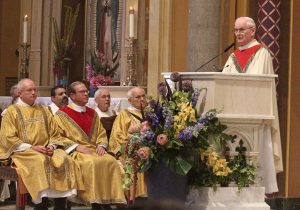 Canon Flattery recalls the life and accomplishments of the Diocese of Peoria’s first bishop, John Lancaster Spalding, during a homily at a Founder’s Day Mass at St. Mary’s Cathedral in Peoria in 2016. (The Catholic Post/Jennifer Willems)

He traveled to the Holy Land five times and said he treasured his time “walking where Jesus walked.”

When the Diocese of Peoria in 2016 marked the 100th anniversary of the death of founding Bishop John Lancaster Spalding as well as the completion of a major restoration project at St. Mary’s Cathedral, it was Canon Flattery who gave the homily recalling the life and legacy of Bishop Spalding.

Reflecting on his priesthood in an interview as he observed the 60th anniversary of ordination in 2015, Canon Flattery gave thanks that his ministry placed him in “two wonderful worlds” — the priesthood and the military.

Memorials may be made to Holy Family Parish, the Danville Library Foundation, or the Vermilion County Museum.