While he doesn't get into the classroom as often as he'd like, Msgr. Brian Brownsey tries to get over to St. Mark School in Peoria a couple times during the week, even if it's just to walk through the cafeteria or see students on the playground. "When I go to school and see my kids, I get new life," he said. (Provided photo)

He might have been named the Distinguished School Pastor of the Year, but Msgr. Brian K. Brownsey, pastor of St. Mark Parish and School in Peoria, prefers to expand the spotlight.

“I just did what everybody else does,” he said simply.

“Our principal, Noreen Dillon, is top-notch. If there’s anything good at St. Mark’s, it’s because of her, not me,” he told The Catholic Post. “And she has an entire team behind her that just jumps up and volunteers.”

All three will be recognized at a Mass celebrated by Bishop Daniel R. Jenky, CSC, on May 8. A luncheon for all school pastors, chaplains and principals will follow.

As a seminarian, Msgr. Brownsey wasn’t sure he was cut out to be involved in youth ministry or teaching. Shortly after he was ordained in 1996, however, Bishop John J. Myers appointed him to serve at Alleman High School in Rock Island, and it changed his life. 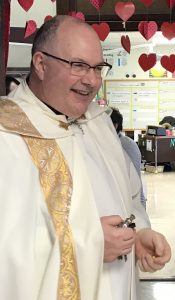 “I see the joy that what he does brings to him and that makes me look at how I can do that, too.” — Noreen Dillon, principal of St. Mark School, Peoria, speaking of Msgr. Brian Brownsey (pictured)

When Msgr. Brownsey was appointed pastor at St. Mary, Utica, and chaplain at Marquette High School in Ottawa in 1998, he admitted to feeling some fear, though. Confiding in one of the Sisters of St. Francis of the Martyr St. George who taught at Alleman, he said, “What if I mess it up?”

“Every piece of wisdom I’ve ever gotten is a different way of stating that very thing,” Msgr. Brownsey said.

He has made it his mission to help people disregard what the “Liar” tells them and listen for God’s voice saying, “You are my beloved child in whom I am well pleased.”

Another opportunity to work with young people came when he was named associate director of vocations for the Diocese of Peoria in 1999 and director in 2003. It is a role he would continue to play as rector of St. Mary’s Cathedral in Peoria (2006-08), director of St. Joseph Newman Center at Bradley University (2008-present), and St. Mark Parish in Peoria (2011-present).

“That was one of the coolest things, when my sons became my brothers,” Msgr. Brownsey said.

He relinquished duties with Office of Priestly Vocations in 2015, and maintains a balance between the Newman Center, St. Mark School and St. Mark Parish.

“My life now is defined by being a father and anything that reminds me I’m a father gives me life,” Msgr. Brownsey said.

He works hard to retain those connections over the years, too. For example, one of the students he met when he was the diocesan director of Teens Encounter Christ was the president of the St. Joseph Newman Center when he was assigned there. Msgr. Brownsey has since witnessed the young man’s marriage and baptized the couple’s child.

When he goes to meetings at Peoria Notre Dame, he makes the rounds of the commons during lunch to greet former students. After Mass at St. Mark, he makes it a point to be at the front doors to greet some of his older “children” — parishioners and school parents.

And he likes to see “all my kids play together,” Dillon told The Post.

“So he likes to see the Newman Center kids showing leadership and direction here for us, and then our kids being able to see them as role models,” she said. “Bringing those different parts of life together is a gift he has.”

Another gift is being present to the person in front of him, said Dillon, who nominated him for the diocesan honor.

“You just know that he cares, he genuinely cares about who you are and how you’re doing, and I see him doing that with everybody,” she said.

Not only is Msgr. Brownsey supportive of her and the teachers at St. Mark, but he always seems happy to do it, she added.

“I see the joy that what he does brings to him and that makes me look at how I can do that, too,” Dillon said.