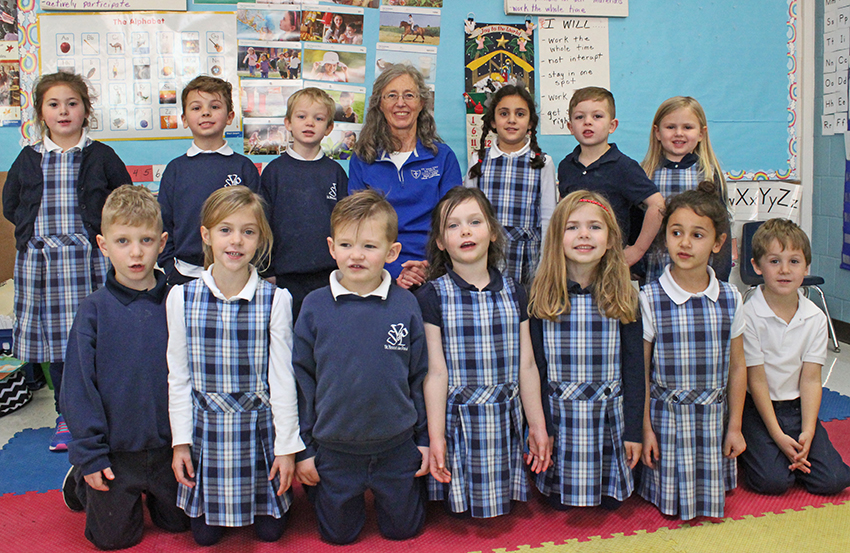 When Eileen Lohr was first approached to teach kindergarten at St. Vincent de Paul School in Peoria, she was inclined to decline.

“I had never taught kindergarten,” she told The Post. “I did a lot of volunteering and summer camps, but not kindergarten. I didn’t know if I could do it.”

That was 21 years ago and she couldn’t be happier that she said, “Yes.”

HER PARENTS SET THE EXAMPLE

Lohr grew up in Massachusetts and northern New Jersey. She studied for her bachelor’s degree in health and physical education, with an endorsement in elementary education, at Trenton State College (now The College of New Jersey).

For many years she was a substitute teacher and coached cross country and track and field, which were her sports in high school and college. She continues to do that at St. Vincent de Paul, as well as coaching declamation or speech.

Her parents were always active in their parish when Lohr — the second oldest of seven children — was young. When volunteer opportunities came up, everyone got involved.

“When you have parents who set an example, you just follow that. I don’t think you understand that until you’re older,” she said.

Lohr served as a catechist and baptism coordinator at her parish in Virginia, and kept the family tradition alive when she moved to Peoria. Now adults, her three children attended St. Vincent de Paul School, and eventually she started to work as a substitute teacher there.

“DOING WHAT I LOVE”

“The best thing about this age group is they’ll do whatever you want to do,” she said. “All you have to do is make it fun and make them understand they can do it. I always say, ‘I’ll never ask you to do anything I don’t think you can do.’”

That way they learn to handle challenges and have fun at the same time, Lohr said.

Working in a Catholic school is a dream come true for her.

“I think it was meant to be,” Lohr said. “We talk about divine intervention — I was doing long-term subbing because I need to be in a setting where I could be most effective. In a public school I would still be effective and I would still be able to be myself, but I wouldn’t be able to draw on everything.”

She enjoys working with people who have the same faith values, she said, adding that she is grateful for her fellow teachers and Patsy Santen, the principal.

“Eileen’s students and our community are very blessed to have her as our teacher,” Santen said in her letter of nomination. “She is a wonderful example of the effective teaching and religious dedication at St. Vincent de Paul, always striving for academic excellence and working to get all of her students into heaven!”