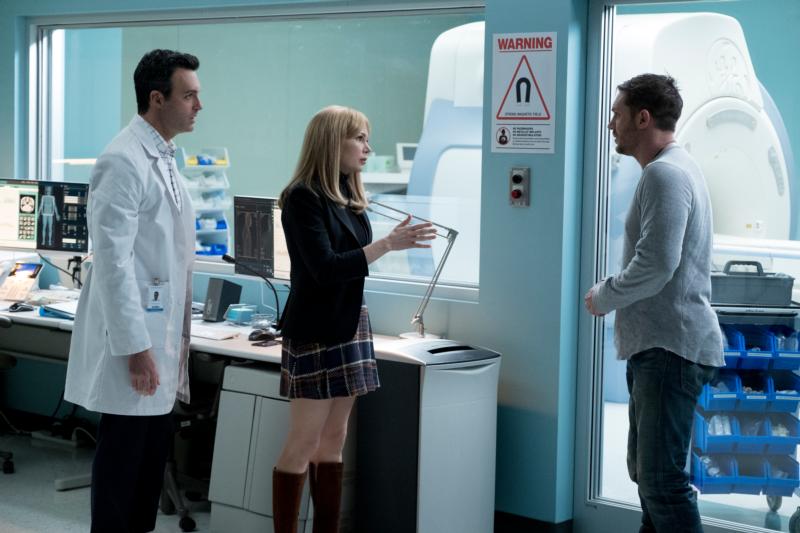 Reid Scott, Michelle Williams and Tom Hardy star in in a scene from the movie "Venom." The Catholic News Service classification is A-III -- adults. (CNS/Sony)

While investigating an evil billionaire (Riz Ahmed) who has been secretly experimenting with fusing human beings and aliens into a composite life form, a reporter (Tom Hardy) accidentally undergoes the transformation, which endows him with superpowers but also leaves him unable, at times, to control his own actions. He gets help from his sympathetic ex-live-in-girlfriend (Michelle Williams) and her new beau (Reid Scott), a physician. But the extraterrestrial of the title has a battle to fight with others of his kind here on Earth so expelling him from the journalist’s body proves challenging.

This Marvel Comics-based bit of nonsense from director Ruben Fleischer has some amusing dialogue between Hardy’s character and the fearsome occupant of his body, and the mayhem the creatures wreak, though sometimes described in gruesome ways, is virtually bloodless. That’s about all that can be said in the picture’s favor, though. Forgettable fare for the undemanding and, perhaps, Marvel movie completists.

Much stylized violence with minimal gore, cohabitation, about a half-dozen uses of profanity, a milder oath, at least one rough term, frequent crude and occasional crass language, brief mature wordplay. The Catholic News Service classification is A-III — adults. The Motion Picture Association of America rating is PG-13 — parents strongly cautioned. Some material may be inappropriate for children under 13.