Joe and Mary Kamp of St. Mary of Lourdes Parish in Germantown Hills embrace after renewing their marriage vows at the Diocese of Peoria's Anniversary Mass on Sept. 30 at St. Mary's Cathedral in Peoria. The Kamps will observe their 50th wedding anniversary on Oct. 12. (The Catholic Post/Tom Dermody)

Ron and Doris Hart of Epiphany Parish in Normal had looked forward to the Anniversary Mass at St. Mary’s Cathedral in Peoria all year. And the experience of attending the Sept. 30 celebration for couples marking 50th and 25th wedding anniversaries in 2018 didn’t disappoint.

“It was fabulous,” said Doris of the Mass celebrated by Bishop Daniel R. Jenky, CSC, that featured more than 100 couples from across the diocese renewing their marriage vows. “We’re very honored and blessed to be here.” 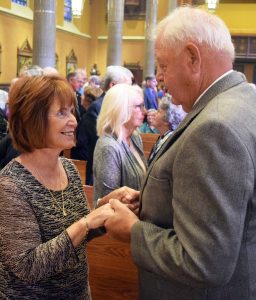 Rod and Suzanne Chatterton of St. Bernard Parish in Bushnell, who celebrated their 50th wedding anniversary on Aug. 17, renew their marriage vows during the Anniversary Mass at St. Mary’s Cathedral in Peoria on Sunday. (The Catholic Post/Tom Dermody)

“It’s the first time we’ve been in the cathedral,” added Ron, who told The Catholic Post how he “instantly fell in love” with Doris after the two were introduced by Doris’ cousin on her family’s farm in rural Wenona. They were married on March 16, 1968, at St. Mary Church in Wenona, and their love would lead to three children and seven grandchildren.

LOVE, HAPPINESS IN EVERY PEW

Bishop Jenky noted that, two days prior to the Mass, he had received a family photograph from his sisters’ wedding 55 years ago that showed him “in a crew-cut, weighing about 140 pounds, and dressed in a tux.”

“Anniversaries make couples very happy and their families happy,” said the bishop in opening remarks. “We are all proud of and thankful for all of you. You give witness to the church and you build up the body of Christ by your fidelity, especially your love.”

As in recent Anniversary Masses, the bishop’s homily was the reading of an “Exhortation Before Marriage.” Before Vatican II, the instruction was a part of every Catholic wedding.

“We stopped using the exhortation at maybe the precise time that our culture most needed it,” said Bishop Jenky, saying it is “filled with wisdom.”

The text emphasizes that marriage is a holy institution established by God and calls couples to “a life of self-sacrificing love” based on Christ’s example. It also reminds them that God promises the daily help of his grace.

After reading the exhortation, Bishop Jenky asked the anniversary couples to stand. He led them in a renewal of their marriage vows, and then asked them to kiss. As they did, the assembly responded with sustained applause. 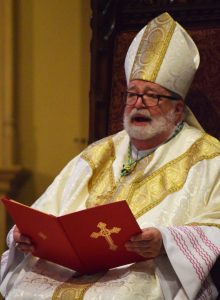 Bishop Jenky shares the church’s teaching on married love by reading from the “Exhortation Before Marriage.” (The Catholic Post/Tom Dermody)

“I think they’ve had some practice at that,” said the bishop.

Readings for the Mass included passages used in many wedding ceremonies, including St. Paul’s “Love is” definitions from Chapter 13 of 1 Corinthians, and St. John’s Gospel account of Jesus’ first miracle at the wedding feast at Cana. Adding to the music for the liturgy was a choir from Holy Family Parish in Peoria.

MET ON A “DIVINE” FLIGHT

After the Mass, the couples enjoyed a reception at the nearby Spalding Pastoral Center, where they received certificates signed by Bishop Jenky and several couples shared their marriage stories and advice with The Catholic Post.

For example, golden anniversary couple Bill and Julia Elmore of St. Jude Parish in Peoria recalled how they met on an Ozark Airlines flight from Peoria to Chicago. While Bill calls it “divine intervention,” he admits to playing an active role.

He explained that in the 1960s there were no assigned seats on flights. As a single man traveling for Caterpillar, he would sometimes “find some cute chick and say ‘There doesn’t seem to be another seat available. Is this one taken?’”

“And the plane was half empty,” recalled Julia. “But I thought it was cute.”

The two struck up a conversation, and “she walked me to my next flight because it left first,” said Bill. They traded phone numbers, and two months later when he needed a date for a football event, he called Julia. By the end of the weekend they were talking marriage.

The golden anniversary couples married and began their lives together at the height of the Vietnam War era.  Soon after Michael Gobert met his future wife Carol at a drive-in theater and they began dating, he would leave for a three-year stint in the U.S. Army that included time in Vietnam.

“We corresponded and then he came home, we started dating again, and got engaged.” 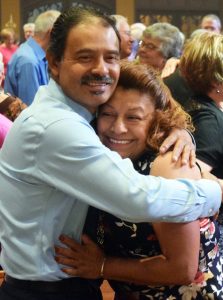 Hector Almanza and Maria Ferrel embrace after renewing their marriage vows at the Diocese of Peoria’s annual Anniversary Mass for couples celebrating 50th or 25th wedding anniversaries in 2018. Members of St. Mary Parish in Moline, they were married Nov. 27, 1993 in Guadalajara, Mexico. (The Catholic Post/Tom Dermody)

The Goberts, longtime members of St. Philomena Parish, will observe their 50th wedding anniversary on Oct. 5.

The Anniversary Mass at St. Mary’s Cathedral had extra meaning for Gloria Walcott. She and her husband, Perry — now members of St. Jude, Peoria — were married on Memorial Day weekend of 1968, when Perry — then in the U.S. Navy — was able to get a three-day leave from his base in Millington, Tennessee.

The wedding was at St. Thomas Aquinas Church in Mt. Pulaski and “our honeymoon was 12 hours long,” recalled Perry.

Two years later, when Perry’s service took him to a ship off the Vietnam coast, Gloria and their young son moved to her parents’ home in Peoria. She was pregnant with their second child.

“On Sunday nights I would leave our little boy with Mom and Dad and come to Mass down at the cathedral by myself,” said Gloria. To renew their vows last Sunday in the same cathedral was “very special,” she said.

“It was like 50 years passing before us,” added Perry, recalling memories that include three children and six grandchildren. “We are blessed.”

Asked for the secrets to a lasting marriage, the anniversary couples had ready answers.

“Being able to communicate,” said Carol Gobert, who then got more specific.

“I once read in a magazine that, when you argue, stay on the subject you’re arguing about,” said Carol. “Don’t go throwing in other stuff to make it more lengthy and complicated. And no name calling. We try to stick to that.”

“Listening to her,” said Michael.

“If you go into marriage making a commitment, that’s it,” said Julia Elmore. Her husband Bill concurred, calling marriage “indissoluable.”

“You gotta work things out or you’re not going to be very happy,” he said.

EDITOR’S NOTE: More photos from the Anniversary Mass have been posted to The Catholic Post’s site on Facebook.