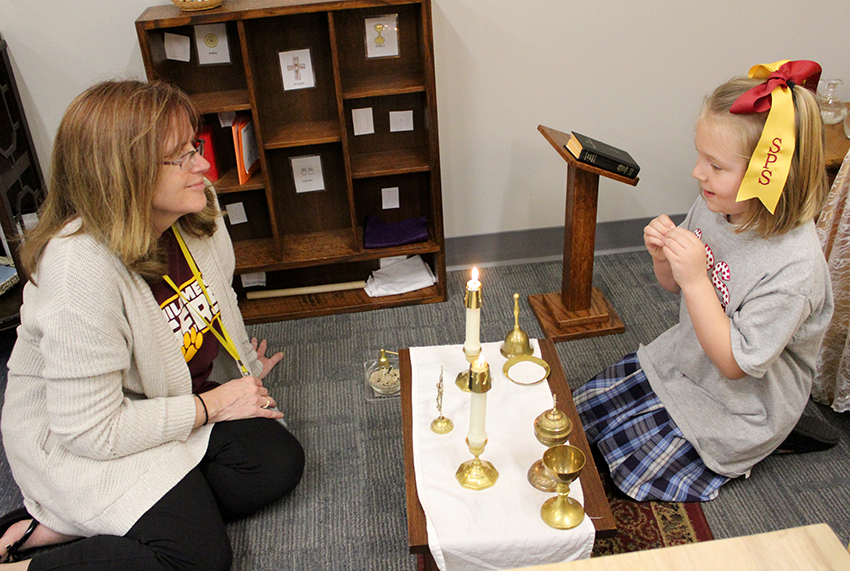 Everything in the Catechesis of the Good Shepherd atrium is made of real materials that are child-sized. Here, St. Philomena kindergarten teacher Debbie Salander works with Claire King, who is learning more about the Mass at an altar with a real chalice, ciborium and candles. (The Catholic Post/Jennifer Willems)

As children around the Diocese of Peoria returned to school this week, they were greeted by their principals, teachers, and the best friend they will ever have: Jesus, the Good Shepherd.

While he is the primary teacher in every Catholic school, Jesus is the only teacher for a religion program known as the Catechesis of the Good Shepherd. It is being adopted by a growing number of schools and parishes around the diocese, with the newest atrium or center opening at St. Mary in Pontiac this fall. 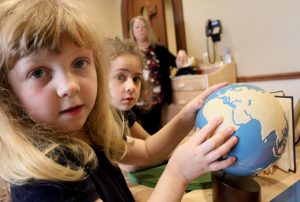 Layla Bustle of Epiphany School in Normal, points to Israel, marked by a red dot on the globe. In the Catechesis of the Good Shepherd atrium, the children learn that Jesus was a real person who was born in Israel, and lived, died and rose there. The globe is a favorite work among the students, said catechist Jennifer Havens, who is looking on. (The Catholic Post/Jennifer Willems)

“The catechist’s role is to allow God and the child to meet,” said Jenny Witt, director of the Catechesis of the Good Shepherd at St. Philomena School in Peoria. “We want to decrease so their time with God can increase.”

“Society is so fast paced and everyone is plugged in. This is their chance to have quiet, contemplative time and they really seem to value it,” Jennifer Havens, lead catechist for Catechesis of the Good Shepherd at Epiphany School in Normal, told The Catholic Post. “We find the older children think about what they want to work on when they come in.”

“They’re so happy to be here with the Lord,” Witt said, noting that children typically spend 90 minutes in the atrium. “Every time I ring the bell that it’s time to go, every class complains — ‘More time!’”

What happens in the atrium?

The Catechesis of the Good Shepherd was developed by Sofia Cavalletti and her Montessori collaborator Gianna Gobbi in Rome more than 50 years ago. The centers at Epiphany in Normal and St. Philomena in Peoria are among more than 1,250 atria in 37 countries.

There are three learning levels, with Level I being for 3- and 4-year-olds through kindergarten. Level II is for students in first through third grade, while Level III is designed for students in fourth through sixth grade.

The program employs a spiral curriculum that repeats and expands the themes covered as the child grows and develops.

The atrium, where the work is done, is meant to be a “chapel for the child,” Witt said, creating a bridge between home and the church. 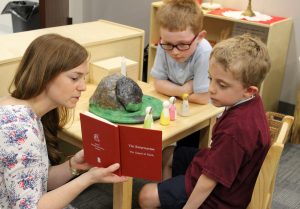 Catechist Jenny Witt guides Mac Jenkins and Kevin Crusen as they seek a deeper understanding of Jesus’ resurrection from the dead. They are working in the atrium of St. Philomena School in Peoria. (The Catholic Post/Jennifer Willems)

While each session begins with everyone gathered around the prayer table, most of the children’s time is self-directed, Havens said. This gives them the freedom to choose what they need to do in order to build their relationship with Jesus that day.

Witt explained that the liturgy and Scripture are the two pillars on which the atrium is built because those are the two pillars of our faith. So there are learning areas throughout the room designed to introduce the children to the parts of the Mass, the gestures that accompany them, and the vessels that are used.

“It’s for prayer, not for play — we don’t play in the atrium. We come to spend time with the Lord,” she said. “So they’re able to prepare the altar.”

Both catechists noted that everything used in the atrium is real, so the cruets are made of glass, not plastic, and what they pour into the cruets is wine, not juice.

“You can see when they’re using real glass that it’s different than if they were using something plastic, the feel of it and the weight of it,” Havens said. “They smell the wine. To use something real tells them this is meaningful. It’s important.”

And it teaches them respect, not just for what is used at Mass but for how they treat each other, Witt said.

During a visit to the atrium at Epiphany, one 4-year-old spent all of his time at the tabernacle, opening it, removing the ciborium and replacing it again. At his request, Havens lit the sanctuary lamp.

In an area devoted to baptism at both the Peoria and Normal atria, children took the opportunity to fill a cruet with water and pour it over their hands as they learned the signs and symbols of that sacrament. 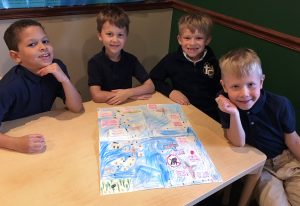 During their time in the Catechesis of the Good Shepherd atrium at Epiphany School in Normal last year, second-graders Simon Hunter, John O’Connell, Hudson Gebhart and Sam Hannel worked together to develop a board game about Jesus’ life. Those landing on the square marked “Jesus falls,” for example, must move back three spaces. Landing on “Jesus rises” means you win. (Provided photo)

Other areas allow them to concentrate on key Bible stories that will help them understand that Jesus was a real person who was born at a certain point in time, who lived in a real place that they can see on a globe, and who died and rose again.

Because the space has been prepared for them, they’re at home right away, Witt said, noting that all the furniture is their size.

“The atrium is meant to be built by the parish family for the children. They see right away that they’re loved and they’re part of a bigger family, the church,” she said.

And parents are telling the catechists how much their time in the atrium prepares the children for Mass.

“Their child is at the Mass saying, ‘Mom, did you see the epiclesis?’ They’re making connections and they know they belong in the liturgy, that the Mass is for them,” Witt told The Post.

Father David Richardson, pastor of St. Philomena Parish, said that’s one of the reasons they made space for the Catechesis of the Good Shepherd a priority when a new addition was built two years ago.

“The Montessori-based faith education touches the kids on a certain level where they’re hands on, they’re working with materials and they’re able to concentrate on and think about divine mysteries,” he said. “In a very real sense it helps them connect ideas and connect the themes while they’re working with their hands and praying.” 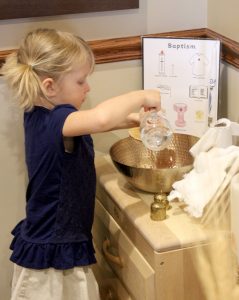 Pouring water over her hand from a real glass cruet, 4-year-old Maxine Grossmann experiences the sights, sounds and symbols involved in the sacrament of baptism as she works in the Catechesis of the Good Shepherd atrium at Epiphany School in Normal. (The Catholic Post/Jennifer Willems)

And as the children ponder these things, the parents do, too.

“I’ve been here for 12 years and since we started this program I’ve had more questions from parents about faith issues,” Father Richardson said. “It’s really striking the kids in a very practical way and sticking with them.”

Jerry Sanderson, associate superintendent of Catholic schools for the Diocese of Peoria, experienced that when his daughters Mary and Kate participated in the Catechesis of the Good Shepherd at Rosmini House in West Peoria a few years ago.

“What you discover, as a parent or any adult observing the program, is that as a child comes into the presence of God there’s a really unique and special way that God speaks to that child,” he said. “In observing that, God is also speaking to us as adults. It touched my heart, as well. I was growing closer to Christ along with my children.”

Sanderson introduced the program to the Catholic schools and some of them have adopted the Catechesis of the Good Shepherd as a component of their religious education curriculum.

For more information about Catechesis of the Good Shepherd, visit cgsusa.org.