St. Mary, Pontiac, to open Catechesis of the Good Shepherd atrium this fall 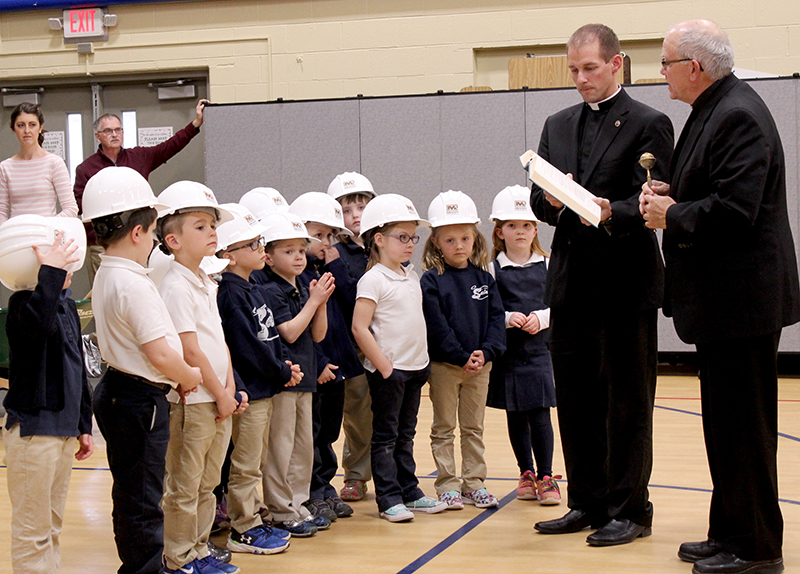 Kindergarten students from St. Mary School in Pontiac take part in a ceremonial groundbreaking on April 6 for a renovation project to create a learning space for the parish’s Catechesis of the Good Shepherd faith formation process. Leading the blessing ceremony are Father David Sabel, pastor, and Father Adam Cesarek, parochial vicar. (The Catholic Post/Jennifer Willems)

PONTIAC — Wearing hard hats and holding shovels and hammers that had been painted gold, the kindergarten students at St. Mary School “broke ground” for the new Catechesis of the Good Shepherd atrium that will open this fall.

The ceremonial event, held in the school gym on April 6, left the floor intact but allowed parents and grandparents, parishioners and benefactors to dig into this faith formation process for the parish’s littlest disciples of Jesus. 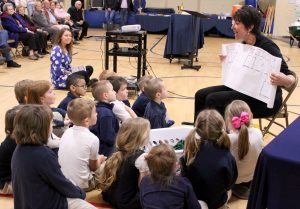 Catechist Kelly Krenz invited the children to join her on the gym floor and spoke about getting to know Jesus in the new atrium, or learning space, to be located in the former convent at St. Mary Parish in Pontiac. (The Catholic Post/Jennifer Willems)

The adults listened in as catechist Kelly Krenz invited the children to join her on the gym floor and spoke softly about getting to know Jesus in the new atrium.

“We learn that he was a real person, who lived in a real place, in a real space and time,” she told them. “We learn to know Jesus in the word, his holy word. . . . We study Jesus in the way he comes to us in the holy Mass. . . . We know him in the sacraments.”

She told them they would also get to know Jesus by learning about the church and their faith.

The Catechesis of the Good Shepherd was developed by Sofia Cavalletti and her Montessori collaborator Gianna Gobbi in Rome more than 50 years ago. Now there are more than 1,250 atria in 37 countries, including several centers in the Diocese of Peoria. (See the story in the next issue of The Catholic Post.)

Jesus is the only teacher in the atrium, which includes learning areas for prayer, a model altar, and baptism, to name a few. All furniture and materials are made of worthy substances and are child-sized, according to Krenz.

While the children work in a self-directed way according to their own development, the 90 minutes they will spend in the atrium is not play time, she said.

“It is definitely work and it’s very specific, very intentional and it’s beyond beautiful,” Krenz told The Catholic Post.

“Their time here will be very quiet, reflective, contemplative and meditative. It’s not a classroom and it’s not church. It’s that place in between, where they can take their relationship with Jesus and grow in that,” she explained.

The atrium at St. Mary will be located in the former convent and covers Level I, which is designed for 3-, 4- and 5-year-olds, Krenz said. In time the parish hopes to add Level II, for children who are ages 6 to 8, and Level III, for students who are 9 to 12 years old. 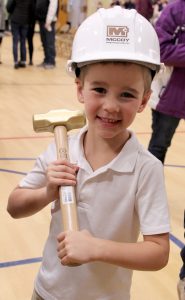 Kindergartner Graham Mennenga is ready for anything. (The Catholic Post/Jennifer Willems)

“We want lifelong lovers of their faith. We want to build and keep them here, celebrating with us. We don’t want to turn them loose and never see them again, she said. “We need their gifts. We need their charisms.”

Funding for the new atrium includes a $6,500 grant from the Fulton Sheen Endowment, which was established as part of the diocese’s Rooted in Faith Capital Campaign. Memorials and generous contributions from parishioners have also made the atrium possible, said Father David Sabel, pastor.

“For our families I think it will be a strengthening of this school and parish,” he said at the start of the ceremonial groundbreaking. Assisted by Father Adam Cesarek, parochial vicar, he also offered a blessing for the kindergarteners and the renovation project, which is being undertaken by McCoy Construction Co. of Pontiac.

“There is an innate wonder and awe in children,” Father Cesarek said. “What we’re trying to do with this Catechesis of the Good Shepherd is to take that wonder and awe and continue to strengthen it, so it never dissipates, it never goes away.”