A retreat day for Spanish-speaking Catholics of the Diocese of Peoria on July 7 was also a reunion of several longtime friends from Mexico who traveled to central Illinois at the invitation of one friend who now calls this area home.

“When I was young we were in a prayer group together,” said Sister Isabel Romero, SCTJM, a native of Cananea in the state of Sonora, Mexico, who is completing her first year as director of Hispanic Ministry for the Diocese of Peoria. “We basically found the Lord together, and then we went on different paths.” 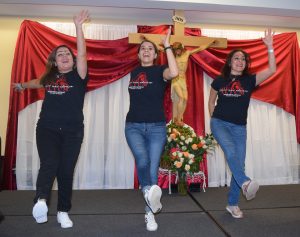 Alejandra Flores, Olga Figueroa, and Marcia Portillo lead hundreds of Spanish-speaking Catholics in lively dance movements to the praise song “Leon de la Tribu” (“Lion of the Tribe”) during a retreat day July 7 at the Spalding Pastoral Center in Peoria. The three were among 15 friends of Sister Isabel Romero, SCTJM, who traveled from Mexico to assist with the retreat. (The Catholic Post/Tom Dermody)

At the Peoria retreat, their paths came together again — this time to share the Lord with others and to challenge area Catholics not to be afraid to go deeper into their faith.

Nearly 200 attended the retreat, many wearing shirts bearing the day’s theme, “Duc in Altum” (“Put Out Into the Deep”) — Jesus’ words when he called Peter to be His disciple.

“It has been a pleasure and really beautiful to get reunited again,” said Olga Figueroa, who resides in Hermosillo, Mexico. The energetic, ever-smiling Figueroa was among those leading retreatants in joy-filled songs and dances of praise.

“It was even more exciting to come here and to learn a little bit about how Sister lives,” continued Figueroa, who speaks fluent English. “It’s beautiful. We love Peoria and its people, who are so kind.”

Raul Encinas, a catechist from the Archdiocese of Hermosillo who was a presenter along with his wife, Blanca, noted how “extraordinarily green” central Illinois is in the summer compared to the desert areas of Sonora state.

“WE NEED TO BE HOLY”

The night before the retreat, the Encinas — who are involved in the pro-life movement and have a special love for St. John Paul II — spoke to area representatives of the charismatic renewal, calling them to be courageous on behalf of Christ’s mission.

On Saturday, Raul gave two talks. The first was titled “Be Not Afraid” and encouraged all to aim for heaven. At an afternoon session, he spoke on the importance of prayer and living the cardinal virtues (temperance, justice, prudence, and fortitude) as we strive to be saints. 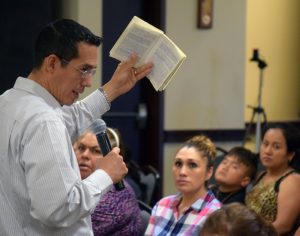 Raul Encinas, a catechist from the Archdiocese of Hermosillo, Mexico, quotes from St. John Paul II as he gives a presentation during a retreat for Spanish-speaking Catholics on July 7 at the Spalding Pastoral Center in Peoria. (The Catholic Post/Tom Dermody)

One of Sister Isabel’s prayer group of friends from Mexico took the path to priesthood. Father Damian Bernal is a Missionary of Guadalupe who served for a time in Africa and now resides in Mexico City. Father Bernal spoke on “If it’s not me, then who? If it’s not now, then when?” — questions he contemplated often as he discerned his calling to the priesthood. But Father Bernal said all followers of Jesus should consider those questions as they seek their roles in this moment of Christianity.

Sister Isabel also spoke, encouraging the retreatants to let the love of Christ fill their hearts. Recognizing and accepting that love, she said, is a first step that then calls us to holiness and to love and serve others.

“It’s not enough to be good,” said Sister Isabel. “We need to be holy. And that requires a radical transformation of our minds, our hearts, and our actions.”

Providing music for the day were about a dozen members of a praise choir called Kayros who traveled from Sister Isabel’s hometown. She expressed appreciation that they and the others took the time away from work and families to fly to Peoria, guide the retreat, and visit with her.

“It was a beautiful experience to get together,” Sister Isabel told The Catholic Post.

The retreat also included a holy hour and a Mass. Assisting with food and other details were volunteers from the local English-speaking Catholic community. Sister Isabel said she is always grateful when the two communities work and pray together.

EDITOR’S NOTE: More photos from the retreat have been posted to The Catholic Post’s site on Facebook.