With “a heavy heart” but also confidence that the changes “will help maintain the vitality of Catholic faith” in the region, Bishop Daniel R. Jenky, CSC, has announced a series of mergers affecting parishes in Livingston and northern McLean counties.

In a letter read at 10 area parishes on the weekend of May 19-20, Bishop Jenky announced that, effective June 13: 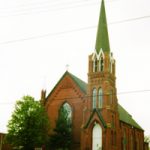 In addition, the former parish of Sts. Peter and Paul in Chatsworth, which in 2013 was among four faith communities that combined to form a new St. Andrew Parish in Fairbury, will now be merged with St. Mary Parish in Pontiac.

Father Chris Haake will continue as pastor of St. Patrick Parish in Dwight, but will now also serve St. Paul Parish in Odell.

The decision was made after consultation with the pastors involved and the diocese’s Presbyteral Council. Among the reasons cited was declining population in the rural communities. The parishes in Campus, Colfax, and Cullom all have fewer than 65 households.

“I know that some will receive this news with difficulty and hardship,” wrote Bishop Jenky. “Please know of my prayers and support for you.”

The church buildings in Campus, Chatsworth, Colfax, and Cullom will be maintained as “chapels of ease,” or alternative worship sites for their new parishes. Parishioners may still request the celebration of weddings, baptisms, and funerals at these churches, but the last regularly scheduled Masses will be offered on the weekend of June 16-17.

Periodic Masses and liturgical activities after that will be determined by the pastors.

Bishop Jenky encouraged those in the merged parishes to attend Mass at their new parish churches the weekend of June 23-24.

“I am confident that you will be welcomed as part of the community,” he wrote, and that with the blending the parish families will be “strengthened by their mutual gifts and talents, especially joining in common worship at Mass.”

Members of all parishes involved were invited to a meeting at St. John Church in Cullom the afternoon of May 20. Msgr. James Kruse, diocesan vicar general, offered further explanations and answered parishioners’ questions.

The parishes in Campus, Colfax, and Cullom all trace their roots to the late 19th century.

The first Mass in a frame church erected by Catholics in Campus was celebrated in 1882. The present church, as well as a two-story school, were built 16 years later. From 1940 to 1973, Sacred Heart was under the care of the Oblates of Mary Immaculate. It has been staffed by diocesan priests since 1995, and serves 63 households.

St. Joseph Parish in Colfax was founded in 1891 and the mission church was originally staffed by Franciscan priests from Bloomington. In its history, the faith community has also been served from Gibson City, now in the Joliet Diocese. A combination rectory/administration building was constructed in 1956, and the present church was dedicated in 1963. The parish has 20 households.

“May we all join together in prayer asking for consolation, understanding, peace-filled acceptance, and knowledge that despite these changes, our Lord will continue to serve our needs and assist us as we worship and serve Him,” wrote Bishop Jenky.